Palestinian researchers and activists are advancing the proposal of a Jordanian-Palestinian confederation, even though the Palestinian leadership fears that such a structure could harm future Palestinian sovereignty. 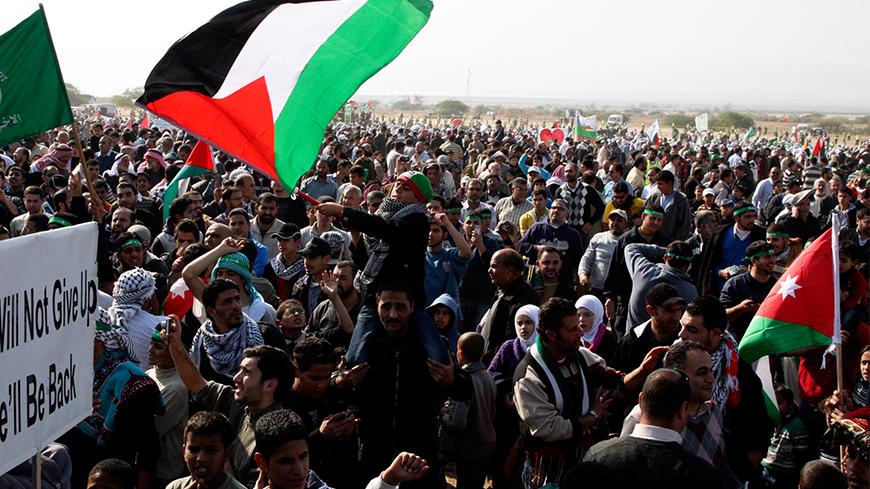 Activists wave Palestinian and Jordanian flags on the Jordanian side of the Dead Sea during a rally after Friday prayers, Nov. 25, 2011. - REUTERS/Majed Jaber

Given the total political stalemate regarding a two-state solution, some in the Palestinian leadership have begun reflecting on “out of the box” ideas for policy initiatives leading to Palestinian independence. One such person is professor Sari Nusseibeh, former president of Al-Quds University in Abu Dis in the West Bank. According to a source working with Nusseibeh on the policy proposals, Nusseibeh today supports the establishment of a Jordanian-Palestinian confederation based on two independent states with strong institutional links between them. Nusseibeh supports this prospect mainly due to the current difficulty to reach a negotiated two-state solution. He relies on the credibility of Jordan’s security forces in relation to the threat of the Islamic State in the eyes of the Palestinians, Israel and the United States.

The Palestinian Authority and Jordan, it is proposed, would negotiate such an initiative, based on the 2002 Arab Peace Initiative. The negotiations would relate to the 1967 lines as the future confederation's western border and to East Jerusalem as one of the two capitals together with Amman. Such a Jordanian-Palestinian understanding would then be presented to the international community, possibly in the form of the Quartet — United States, European Union, United Nations and Russia — to help with negotiations with Israel and regional peace arrangements.

There are clear advantages to the proposal. It makes the two-state solution not solely dependent on the Israeli government of the day. Jordanian King Abdullah II enjoys the respect of the West, and his security forces are perceived as reliable. The issue of security along the Jordan River and on the border crossings with Israel will be easier resolved with Jordanian involvement. Economically, open trade, joint economic projects and free trade and tourism zones will strengthen the economies of both Jordan and Palestine. Also, given the Israeli security establishment’s high regard for Jordanian security forces, the Israelis would be easier to convince to take the security risk of having a neighboring Palestinian state within this kind of two-state solution. Last, a confederation would finally resolve the complex relationship between the Hashemite Kingdom of Jordan and the Palestinians, who compromise approximately half of the Jordanian population.

Many issues would need to be worked out in relation to the political, institutional, economic and security nature of such a confederation. Detailed research on such a possible confederation has been conducted by several groups, including Al-Quds University.

Despite many advantages, there are major difficulties in the way of realizing such a proposition. The Palestinian leadership is traditionally suspicious of the Jordanian court; it perceives it as favoring Israeli security policy positions. It also views a confederation between two states as giving up on a degree of sovereignty, especially regarding the Muslim holy sites in East Jerusalem and security arrangements on the Jordan border crossings.

Former Palestinian President and PLO leader Yasser Arafat used to state publicly that he favors a confederation with Jordan. For example, he referred to this option during a visit to Hebron on Feb. 12, 1999, immediately after King Abdullah Ii took the throne in Jordan, saying, "We want him to know that the Palestinian National Council has agreed to a confederation with Jordan. We are, after all, twin brothers, Palestine and Jordan." The Palestinian negotiators during the Oslo process used to cautiously endorse the idea of a confederation but only after the creation of an independent Palestinian state. As aforementioned, there is little love lost between the leaderships across the Jordan River, but it seems today that their destinies are intertwined.

While Israel’s political establishment was always inclined to involve Jordan in a permanent status deal, the Netanyahu government is likely to reject offhand any proposal of a two-state solution that is based on the 1967 lines. A senior Israeli Foreign Ministry official from the ministry's MAMAD Research Center told Al-Monitor on condition of anonymity that Nusseibeh is not alone supporting such an initiative, and that there are also veteran Fatah officials and Palestinian businesspeople residing in Amman who are advancing similar ideas. He also told Al-Monitor that there is no chance that the Israeli government will endorse such a plan, and that this position has been made clear to Abdullah.

Despite the obstacles and reservations, the confederation plan should be resuscitated. An active Jordanian role in a two-state solution is of paramount importance. Abdullah can today play a historic role in putting an end to the Israeli occupation of the West Bank and in pacifying the region. The United States, too, given all other alternatives, would do well to include this eventuality in President Barack Obama’s Middle East legacy.