Could Jordan-Palestine confederation be in the cards?

Palestinian and Jordanian officials are contemplating the idea of a Jordan-Palestine confederation, to be created after the establishment of a Palestinian state and with Israeli involvement. 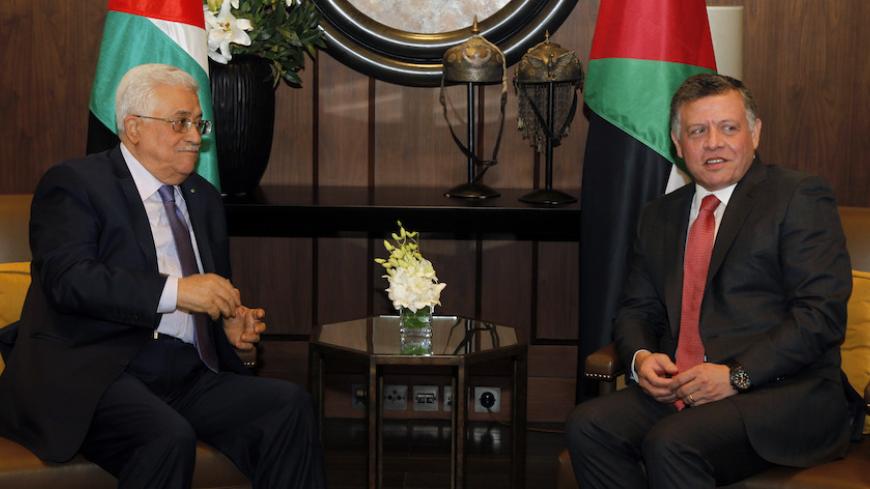 One can sense despair in the corridors of power in the Muqata government building in Ramallah. Palestinian officials tell Al-Monitor that there is more irritation with the Arab world than with Israel. They are frustrated that the Arab regimes focus on the conflicts in Syria, Iraq and Yemen at the expense of Palestinian statehood. They sense that they have lost some lobbying power vis-a-vis the United States and Europe, which are now concentrated primarily on the Iranian nuclear agreement.

Thus, Palestinians are looking for creative ideas to revive international interest in the resolution of the conflict while actively engaging Arab countries. One senior Palestinian official told Al-Monitor of a deus ex machina concept he had in mind that could salvage the Palestinian predicament. The official, who entertains good contacts within the Jordanian court, would like to rekindle the idea of a Jordanian-Palestinian confederation, an issue he has apparently raised lately with Palestinian President Mahmoud Abbas and with the entourage of the Jordanian king.

The characteristics of the confederation, according to the senior source, would be outlined in an agreement between two independent states — each headed by an independent executive, two capitals (one in Amman and one in East Jerusalem), two parliaments, a joint parliamentary institution dealing with confederative issues, a joint economic area of free trade, joint economic ventures (including enterprises in the Dead Sea region) and joint water and energy mechanisms. There would also be joint security and anti-terror measures and arrangements, mainly along the Jordan River.

The confederation, according to this source, would come about only after the establishment of the Palestinian state. Yet, an understanding in principle could be achieved prior to that, so as to give Jordan a central role in the negotiations on statehood. Jordanian involvement in the negotiation is considered by many of its officials as essential in several aspects.

First, it is essential in the context of security arrangements, as the threat from external terror structures could become a common plague on both sides of the river, especially for small neighboring countries such as Jordan and Palestine.

Second, the issue of Palestinian refugees is also very relevant to Jordan — about 60% of its population is Palestinian. In a future Israeli-Palestinian agreement, both sides are expected to act according to the Arab Peace Initiative of 2002, toward “a just and agreed solution.” While Palestine will be the homeland of the refugee, the economic challenge of refugee resettlement would be easier solved if Palestine and Jordan act together, finding an all-around acceptable solution.

There is also the question of Jerusalem — Jordan’s role with regard to Jerusalem has been recognized and formalized in the Israeli-Jordanian peace treaty, yet the Hashemite Kingdom would undoubtedly let the Palestinians lead the negotiations and solution on East Jerusalem.

The foreseen confederation has further advantages to all the parties:

For Israel, a Jordanian-Palestinian confederation makes sense from a security point of view. In the volatile Middle East, the Jordanian security forces are among the best trained and the most reliable. In addition, a trilateral cooperation on infrastructure, such as water, energy and transportation would benefit Israel economically, as well as in terms of regional stability. The three countries could, with time, establish a version of the Benelux Economic Union (the Belgium, Netherlands and Luxemburg Cooperation). Referring to the perspective of Israeli public opinion, a confederation would evidently facilitate “selling” a permanent status deal to Israelis. In Israel, Jordan is popular and respected, whereas Palestine is not.

With regard to Jordan, the Hashemite leadership has always been vague about the possibility of a Jordanian-Palestinian confederation. This vagueness is the mere reflection of the Jordanian ambiguity toward the Palestinians — on one side there is a strong kinship, often stemming from family relations (the queen of Jordan is Palestinian), and on the other side there are strong suspicions about Palestinian ambitions to take over Jordan, given that Palestinians are the majority in the country. That ambiguity is very much alive today. Yet, Jordan could gain much from a confederation, mainly in terms of significant international support for the security and economy of the country. A confederation agreement would finally also define the relationship between the two sides of the Jordan River, thus ensuring Jordan’s stability.

A senior Jordanian source (who served in several Jordanian governments) told Al-Monitor that Jordan would be ready to explore a confederation, and that the issue actually came up last year in talks between King Abdullah and Abbas. Yet, he stressed that it could be contemplated only after the establishment of a Palestinian state.

Another senior source in Ramallah also said that he was well aware of hesitations on this topic by all sides. Nevertheless, he insisted that involving a concrete confederative vision within the peace process could, or even should, be the only way forward. The alternative, he said, is violence.

He may be right, but experience tells us that those feelings of suspicion prevailing between the two sides of the Jordan River between Jordanians and Palestinians are stronger than the desire to seek opportunities and solutions. This may, however, gain some traction simply out of despair or lack of realistic alternatives, thus attracting political attention. This could be Jordan’s way of salvaging their Palestinian brethren.

Even so, at this point there is no chance that the new Israeli government will be ready to advance toward a Palestinian peace settlement in any form. For many in the Benjamin Netanyahu government, Jordan is Palestine and the West Bank is Israel. In this political constellation, messianic world views and the ongoing military occupation will override any realistic policy thinking.