One of the outcomes of a major meeting between Palestinian President Mahmoud Abbas and Jordan’s King Abdullah was an agreement to form a crisis committee to coordinate the positions of both countries regarding incidents at Jerusalem's holy sites. 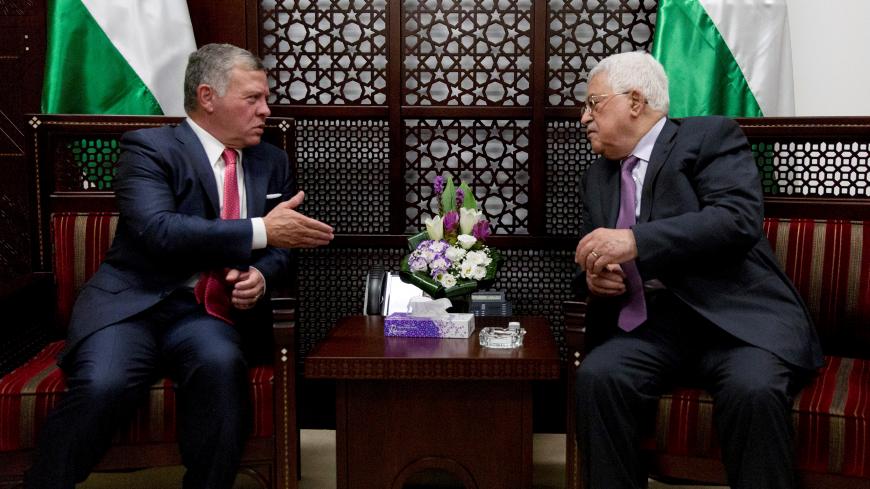 RAMALLAH, West Bank — The meeting between Palestinian President Mahmoud Abbas and Jordanian King Abdullah II in Ramallah Aug. 7 has led to the formation of a joint crisis committee. The committee will be in charge of strengthening political coordination between the two countries, consolidating their positions on issues of common concern and addressing conflicts that erupt in the West Bank, most importantly the renewed crisis at Al-Aqsa Mosque.

Mahmoud al-Habash, the president's adviser for religious affairs who also attended the meeting, told Al-Monitor, “The magnitude of the challenges imposed on us as Palestinians and Jordanians — most importantly the Israeli occupation’s measures in Jerusalem that affect the Jordanian guardianship of the holy sites — requires coordination between our field, political and legal positions.” He explained that the crisis committee “will include sub-committees of a high-level political nature from both sides, under the supervision of political leaders, to coordinate and consult in all situations, in addition to enhancing coordination between the two governments.”

Habash stated, “King Abdullah’s visit to Ramallah wrecked Israel’s attempts to create a rift between Palestinians and Jordan during Al-Aqsa events,” adding, “We and Jordan have one position and a single vision. Coordination between us is at its highest levels. The king's visit represented a declaration of absolute support for the Palestinian leadership, represented by President Abbas.”

Abdullah’s visit to Ramallah, the first of its kind since 2012 and the fifth since he took the throne in 1999, was intended to show Israel that Jordan supports the Palestinian Authority and Abbas as well as the decisions he made during the recent Al-Aqsa incidents. Palestinian officials deny Israeli reports that Abbas is besieged and being prevented from leaving the West Bank.

The visit was set against deteriorating Jordanian-Israeli relations after Israel ignored calls by Abdullah to lift the security measures it imposed at Al-Aqsa on July 15, including the installation of metal detectors and security cameras at the mosque’s gates. Israel also disregarded the king’s demand for the prosecution of an Israeli security guard accused of killing two Jordanians inside the Israeli Embassy in Amman on July 23.

A Fatah leader told Al-Monitor on condition of anonymity, “The crisis committee was formed after the two leaders evaluated the Israeli attacks on Al-Aqsa. The committee will therefore focus its efforts on coordinating the Palestinian-Jordanian positions regarding Al-Aqsa, to prevent any conflicting positions in future crises and to prepare for the upcoming stage, during which we expect [Israeli Prime Minister Benjamin] Netanyahu to carry out knee-jerk actions in Jerusalem and Al-Aqsa.”

The recent events at Al-Aqsa, which was closed from July 14 until July 27, were a major embarrassment to Jordan. The kingdom has been the custodian of holy sites in Jerusalem since Palestinian and Arab officials gave the responsibility to the Jordanian Sharif of Mecca, Hussein bin Ali, in 1924. Jordan’s custodianship was renewed in the agreement on the defense of Jerusalem holy sites signed by Abbas and Abdullah on March 31, 2013.

Ahmad al-Majdalani, a member of the Palestine Liberation Organization’s Executive Committee and a close associate of Abbas, told Al-Monitor that the Jordanian king's visit to Ramallah was “aimed at showing Israel the high level of coordination between Palestinians and Jordanians, proving that the two countries are not in disagreement over Al-Aqsa and Jerusalem.”

Majdalani said that the visit had nothing to do with the internal Palestinian situation, noting that the issue of Abbas’ succession was not discussed.

The peace process and US efforts to revive it were, however, addressed during the meeting. Palestinian chief negotiator Saeb Erekat said in an Aug. 7 press release that Abbas and Abdullah discussed “the need for the US administration to define the ultimate goal of the peace process between the Palestinians and Israel and to stop all Israeli settlement activities, including in Jerusalem.”

Abbas and Abdullah coordinated their positions over the peace process in anticipation of a visit by a US delegation to the region within a couple of weeks, a trip whose planning was confirmed by Palestinian Foreign Minister Riyad al-Maliki. The delegation will be headed by White House senior adviser Jared Kushner, and will include negotiator Jason Greenblatt and Deputy National Security Adviser Dina Powell. According to Reuters, the delegation is to meet with leaders from Saudi Arabia, the UAE, Jordan, Egypt, Israel and the PA to discuss what an unnamed White House official called a “path to substantive Israeli-Palestinian peace talks.” Its date has yet to be set.

Political analyst and professor of political science at al-Quds University, Abdul Majid Sweilem, told Al-Monitor, “The Jordanian and Palestinian leaderships believe Jerusalem is in danger in light of Israel's policy to impose a fait accompli on a political solution through settlements and separatist plans.” Sweilem went on, “Jordan is affected by the Israeli policy in the Palestinian territories, which is why it is seeking to redress the dangers threatening the Palestinian territories, given the complexity of the negotiations process and the US bias toward Israel.”

He explained that the crisis committee will operate "under the supervision of the supreme political leadership," adding, "This principle of coordination reflects the strength of the relationship between the Palestinian and Jordanian leaderships as well as their keenness to keep their positions unified in all issues.”

The crisis committee will be under scrutiny as future crises inevitably unfold.