The Trump-Netanyahu love fest that was broadcast around the world doesn’t bode well for Palestinians or for any possible peaceful breakthrough. 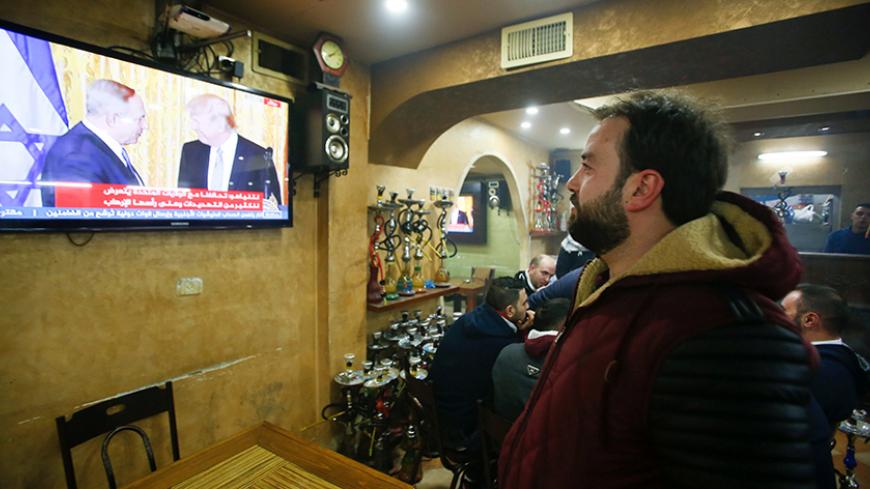 A number of experts on Arab affairs believe that efforts to delegitimize the Palestinian leadership are bound to run into a wall of Arab opposition. Oraib Rantawi, the director of Al-Quds Center for Political Studies, told Al-Monitor that no Arab leader today will bypass the legitimate Palestinian leadership. “This issue was settled at the 1974 Arab Summit when the PLO was declared as the representative of the Palestinian people.”

Rantawi added that although the Arab world is in disarray, Arab leaders will not take on the issue of Palestine by themselves. “While some Arab countries have not been totally happy with the current Palestinian leadership, no one will take the risk of falling into the trap of bypassing the legitimate Palestinian government and presidency.”

In this context, the Arab quartet (Jordan, Egypt, Saudi Arabia and the UAE) reportedly expressed in December its dissatisfaction that the Palestinian leadership refused the quartet's entreaty to include Mohammed Dahlan within the leadership structure.

An Arab Summit, planned for March in the Jordanian capital, Amman, might address the Palestinian issue, although Rantawi said he does not think it will be high on the agenda. “While Arab countries are careful not to anger the Trump administration, the issue is not that urgent and likely won't require a strong position,” he said.

Nabil Khatib, a veteran Arab journalist based in Dubai, told Al-Monitor that Arab leaders are committed to basic essentials needed for any realistic resolution: “Arabs are committed to the representation of the PLO as per the 1974 Rabat Summit decision, and along with 57 Islamic countries, to the 2002 Arab Peace Initiative."

Khatib, who specializes in Middle East affairs, said that pressures and proposals involving Arab leaders regarding the peace process always fail. “These proposals have never worked, and I believe they will not work this time.”

Taj Abdel Haq, a leading columnist from the UAE and editor of Eremnews, believes that while the Palestinian cause has shifted in order of their priorities, the Gulf countries will not circumvent the political rights of Palestinians. “Gulf countries will not accept the perpetuation of the occupation of Jerusalem and will insist on the principles enshrined in the UN resolutions,” he told Al-Monitor

Both US President Donald Trump and Israeli Prime Minister Benjamin Netanyahu hinted at the idea of reaching out to the Arab leadership to break the current negotiations deadlock. In a joint press conference Feb. 15 in Washington, Netanyahu called the current situation a historic opportunity. “We can seize a historic opportunity because for the first time in my lifetime and in the lifetime of my country, Arab countries in the region do not see Israel as an enemy, but increasingly as an ally.”

For his part, Trump has included regional Arab leaders in his future plans. “Our administration is committed to working with Israel and our common allies in the region toward greater security and stability," he said at the conference.

The actual Israeli position on the Palestinian conflict witnessed a major retraction. The narrative and requirements of Netanyahu for peace have changed following Trump's inauguration. Netanyahu, who used to insist on negotiations without conditions, suddenly has new conditions. He refrained from calling for direct talks or repeating his lip service support of the two-state solution. In the press conference, held even before the White House summit commenced, Netanyahu said he wants Israel to continue ruling the Palestinian people, denying them political rights, while at the same time insisting that Palestinians recognize Israel as a Jewish state.

So even if Palestinians become Zionists and pay homage to Israel as the national state of the Jewish people, Palestinians will still have to live with perpetual Israeli control. In the press conference, Netanyahu’s conditions included that “Israel must retain security control over the entire area west of the Jordan River” in any future solution.

This idea of the minority Israelis in the occupied territories ruling the majority Palestinians is called apartheid and is considered a war crime according to international humanitarian law. Palestinian legislator Mustafa Barghouti responded to this idea by stating in a press release, following the Feb. 15 White House meetings, “Palestinians are unwilling to live as slaves to the occupiers in an apartheid racist system.”

Former US peace envoy to the Middle East Martin Indyk has indicated that a new approach to the Israeli-Palestinian conflict could include Arab leaders. The new approach, detailed in a December 2016 Indyk piece on the Brookings Institution site, is called the “outside-in approach.” According to Indyk, this approach would include a key role for Arab leaders. It “would involve Trump convening the leaders of the Quartet (the United States, Russia, the EU and the UN) and the Arab Quartet (Egypt, Jordan, Saudi Arabia and the United Arab Emirates) in a summit meeting to announce a set of agreed principles that would serve as the terms of reference for direct Israeli-Palestinian negotiations to achieve a two-state solution.”

Arab commentators, however, dismissed this approach as well. Rantawi noted that the 2002 Arab Peace Initiative stipulates clearly that Arabs and Muslim leaders will only normalize relations with Israel once it agrees to withdraw from the areas occupied in 1967. “Arab leaders are too weak today to meet with Israel and normalize relations with it without a commitment by Israel to withdraw to the 1967 borders,” said Rantawi, noting that Arabs will not be able to make more concessions than Palestinian leader Mahmoud Abbas.

The Trump-Netanyahu love fest that was broadcast around the world doesn’t bode well for Palestinians or for any possible peaceful breakthrough. It reveals a clear rejection of the ABCs of peacemaking. Instead of building on experiences of previous administrations and learning from their mistakes, we are forced once again to provide the new resident of the White House with basic education about the requirements for peace in the Middle East. They include: respecting the parties to the conflict, providing a plan that ensures an end to the occupation, a reversal of illegal settlements and allowing Palestinians the right to determine their own future on their own land alongside the State of Israel.

If this two-state solution is unacceptable, then a one-state solution where all citizens have equal rights irrespective of religion is also acceptable. Palestinians, however, are unwilling to live under an oppressive and apartheid regime.