Is Trump really so popular in Israel?

Contrary to the popular belief that all Israelis applaud US President Donald Trump's policies, center and left-wing politicians worry that the Trump-Netanyahu axis distances an agreement with the Palestinians and isolates Israel on Iran. 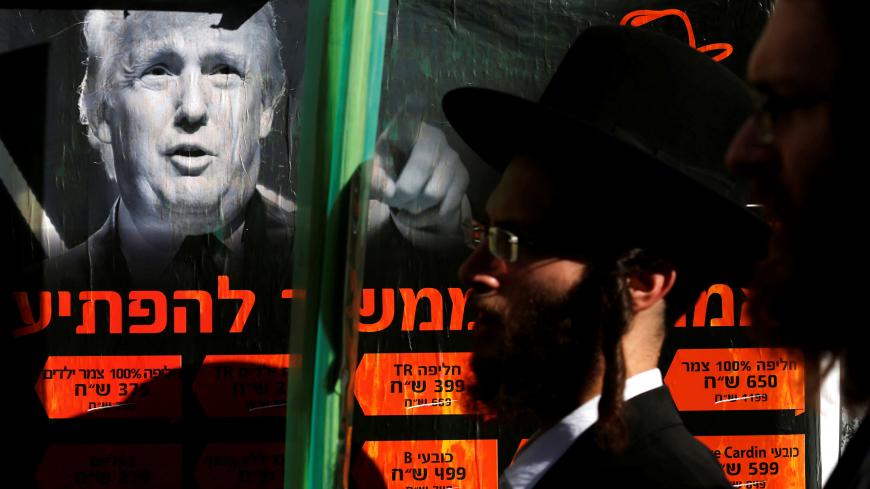 US President Donald Trump is most probably the second-most popular political leader in Israel (after Prime Minister Benjamin Netanyahu). His anti-Iran and anti-two-state solution positions, the relocation of the US Embassy to Jerusalem, his tacit greenlighting of settlement expansion and US backing of Israeli military actions in the Gaza Strip and Syria have turned him — in the eyes of many Israelis, especially the right — into the most pro-Israeli president in modern times. His speeches on Israeli issues could not have been better written, even by Netanyahu himself.

Yet many on the Israeli left have a different perception of the American president. More accurately, they believe that the Trump-Netanyahu axis threatens Israel both diplomatically and strategically.

Centrist leader Yair Lapid and center-left Labor leader Avi Gabbay both hailed the relocation of the US Embassy to Jerusalem. In view of Trump’s popularity in Israel, they have been careful not to criticize him directly. Nevertheless, members of their respective camps point out that the alliance between Netanyahu and Trump, as expressed in four principle domains, could generate dangerous regional ramifications.

The first domain is that of the two-state solution. Referring to Trump’s recognition of Jerusalem as Israel’s capital, Gabbay said on Dec. 6, 2017, “I hope that along with the recognition, the American administration will take steps in the Middle East to restart the peace process. It can happen. We should see it as something that can inspire negotiations.” And so, while the relocation of the US Embassy to Jerusalem was applauded by most of the political echelon, left-wing members argue that this isolated move, absent a realistic peace process, could actually damage Israeli interests.

A former top security official, active within the opposition, told Al-Monitor on condition of anonymity that since Jerusalem is the most passion-loaded issue for Palestinians, Arabs and Muslims, the relocation has rekindled strong sentiments against the Trump-Netanyahu axis. He said that according to reliable US sources, an eventual US peace plan would be very one-sided (in favor of Israel) and that in such a case, the American plan would be categorically rejected by the Palestinians and most of the Arab world. He also stressed that the settlers’ movement and HaBayit HaYehudi leader Naftali Bennett are having a dream-come-true moment, and therefore they are applying pressure on Netanyahu to annex parts of West Bank Area C (under Israeli control).

The former official added with guarded anger, “Trump and his right-wing administration do not comprehend that a two-state solution is an almost existential interest for Israel if it wants to remain a Jewish democracy, rather than deteriorating into a binational apartheid state.”

The second domain threatening Israel’s interests is that of the United States’ Iran policy. Al-Monitor contributor Ben Caspit pointed out that not all the Israeli security establishment is onboard the Trump-Netanyahu “all or nothing” approach against Iran. The former official shares the view that having the nuclear deal is better than undermining it, as it distances Iran from developing nuclear weapons. He believes that the deal should be improved, especially in relation to Iran’s ballistic missiles. He does not believe the United States intends to use military force against Iran. In his opinion, Trump’s withdrawal from the nuclear deal could in the long run isolate Israel in its confrontation with Iran.

The third dangerous facet of the Trump-Netanyahu axis is that of Israel-US Jewry ties. The former official criticized Netanyahu strongly for antagonizing the US Democratic Party and even many of its Jewish supporters (more American Jews voted for Clinton than for Trump). He noted that 2018 may see a new Senate composition, and in 2021, there may be a Democratic president in the White House. Therefore, Netanyahu’s policy is, he argued, myopic and dangerous.

Last but not least, while the Trump-Netanyahu axis offers strong relations with Israel’s greatest ally, it also threatens its relations with Europe. Israel’s positions on settlement expansion, for instance, tacitly approved by the United States, have brought Israel’s ties with the European Union, its main trade partner, to an all-time low. On May 28, France urged Israel to halt the demolition of the West Bank Bedouin village Khan al-Ahmar, stating that the village is located in an area ”of strategic importance to the two-state solution.”

A senior Israeli Ministry of Foreign Affairs official with access to Netanyahu told Al-Monitor that in his view the Trump-Netanyahu alliance greatly irritates the Israeli left. Netanyahu is thrilled to have such strong and almost unconditional support from Israel’s most important ally. The prime minister sees this as a vindication for his long-held views and policies and as an American green light to pursue his anti-Iran policies, as well as opposing a two-state solution and continuing settlement expansion.