UN sources are skeptical on the feasibility of the US Mideast peace plan, which is clearly in favor of Israel’s positions. 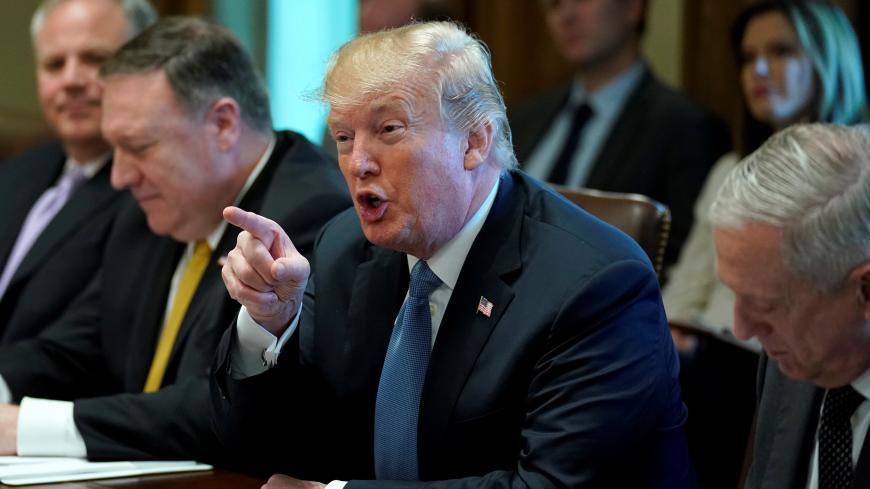 US President Donald Trump speaks as he sits between US Secretary of State Mike Pompeo (L) and Secretary of Defense James Mattis during a Cabinet meeting at the White House, Washington, June 21, 2018. - REUTERS/Jonathan Ernst

While pursuing an “America first” policy, the Donald Trump administration has discovered the international and domestic benefits of peacemaking. Trump’s June 12 summit in Singapore with North Korean leader Kim Jong-un ended with a rather vague communique. Nevertheless, it filled Trump with the confidence that he could achieve the complete denuclearization of North Korea through a negotiated settlement in less than three years.

In a meeting held in New York on June 15, White House adviser Jared Kushner, Middle East negotiations envoy Jason Greenblatt and US Ambassador to the United Nations Nikki Haley discussed with UN Secretary-General Antonio Guterres the upcoming US peace plan for the Israeli-Palestinian issue, the need to alleviate the humanitarian crisis in Gaza and the need to curb anti-Israeli resolutions at various UN forums.

According to a senior Norwegian UN diplomat close to Guterres, the Trump representatives were very serious about finalizing the US peace plan for the Middle East and publishing it. According to this diplomat, while Trump has not turned overnight into a passionate peacemaker believing in the equality between people, his envoys did seem committed to closing a deal.

Trump is, above all, a businessman, and this is how he negotiates; he makes a “take it or leave it” proposal, leaving detailed negotiations to his lieutenants and lawyers. According to the Norwegian diplomat, the Trump team is coordinating its peace plan mainly with Saudi Arabia’s Crown Prince Mohammed bin Salman and to some degree with Egyptian President Abdel Fattah al-Sisi. The envoys were open about their totally pro-Israeli positions and proud of the relocation of the US Embassy to Jerusalem, presenting this as a diplomatic achievement.

The Norwegian diplomat further claimed that Trump envisages a US-led regional peace package comprised of a series of deals that will serve first and foremost US strategic and economic interests. The values of equality, diplomatic collective efforts and human rights are far away from his worldviews.

The UN at its highest level is highly concerned with the deteriorating situation between Israel and the Palestinians. Israel is preserving its hermetic closure of Gaza and continues unrestrained expansion of the settlements, especially in the Jerusalem area. Thus, a two-state solution is becoming virtually impossible. The UN and its regional agencies, together with the international community, is working to alleviate the humanitarian crisis in Gaza, also in order to prevent another Gaza war.

The Norwegian diplomat estimates that the purpose of a proposed deal is to leave Trump with a peace legacy for the region, which all parties will have to address with time. Still, he estimates that the plan has no chance of being accepted by Palestinian President Mahmoud Abbas.

What will the US deal look like? The proposal that was discussed in New York leaves the definition of a two-state solution to the parties. It proposes to move some East Jerusalem Palestinian neighborhoods over to Palestinian rule, and it does not allow Israel to annex lands that are in Area C (under Israeli control). It creates a de facto Palestinian state in areas A and B (under Palestinian partial control), as well as in Gaza, provided that Hamas will disarm. Security will be Israel’s responsibility, and there will not be a Palestinian right of return for refugees. Regional normalization and economic and security cooperation under US auspices could take place along the lines of the 2002 Saudi Peace Initiative.

The United States expects an Israeli “yes” with reservations and a Palestinian “no.” It counts on Saudi, Jordanian and Egyptian partners to consider the proposal as a basis for further negotiations. The Norwegian diplomat advised not to underestimate Trump’s determination on the issue.

A senior PLO official in Ramallah told Al-Monitor that Abbas is asking Amman, Cairo, Riyadh and the Arab League to show Arab unity and reject the plan unanimously.

At the same time, a senior Israeli Ministry of Foreign Affairs official told Al-Monitor that Prime Minister Benjamin Netanyahu is fully coordinated with Trump and would not reject out of hand the US proposal, especially as it talks of the recognition of Israel as a Jewish State.

For the next few months, we will witness such a Trump Middle East plan — and the only thing that we can say with certainty is that Trump remains unpredictable. It is for sure, though, that peace will not break out in our region, at least not in the coming months.