US advances confidence-building measures toward Palestinians

The Palestinian leadership in Ramallah refuses to negotiate with US administration envoys, but might be willing to indirectly discuss an interim agreement. 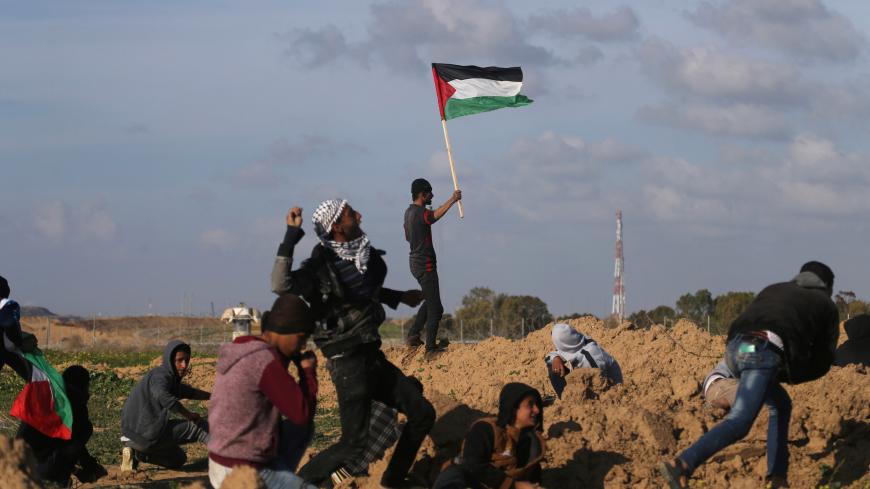 A demonstrator waves a Palestinian flag during clashes with Israeli troops at a protest against US President Donald Trump's decision on Jerusalem, near the border with Israel in the southern Gaza Strip, March 16, 2018. - REUTERS/Ibraheem Abu Mustafa

It seems that Washington has started to realize the global advantages that lie in peacemaking. While Russia is engaged in intense bellicose activity in Syria in coordination with Iran, US President Donald Trump is interested in disengaging from Syria, working with North Korea to achieve a denuclearization agreement and progressing toward Israeli-Palestinian peace. Trump has instructed his senior adviser and son-in-law Jared Kushner and his regional peace envoy Jason Greenblatt to further engage with the parties in the region in order to advance on the Israeli-Palestinian track. The administration is in constant contact on the matter with Egypt, Saudi Arabia and Jordan, and indirectly with Ramallah. For now, Trump will not take no for an answer from Palestinian President Mahmoud Abbas.

A senior PLO official close to Abbas told Al-Monitor that while the Palestinian president refuses any direct contact on a peace process with the administration given its pro-Israeli position and the upcoming move of the US Embassy to Jerusalem, Ramallah is open to indirect contact. Abbas is ready to open indirect communication channels with the United States through his Arab partners, principally Egyptian President Abdel Fattah al-Sisi and Saudi Crown Prince Mohammed bin Salman. These communication channels will focus on confidence-building measures and even on interim measures to stabilize the situation, prevent violence and recreate a new equilibrium in the international community.

In fact, according to the PLO official, there are several areas the Palestinian Authority (PA) is willing to look into. For instance, the leadership in Ramallah is ready to discuss PA rule over the Gaza Strip, accompanied by an international economic relief package. Another subject would be moving East Jerusalem neighborhoods to Palestinian rule (balancing somewhat the move of the US Embassy to Jerusalem) and strengthening its religious control of the Temple Mount (Haram al-Sharif). They are also ready to discuss US-led economic assistance for Palestinian economic growth and activity, including in West Bank Area C, which is under Israeli control.

Beyond that, Abbas will work together with his Arab partners, the European Union, Russia and China on UN resolutions regarding Palestinian statehood based on the 1967 lines with East Jerusalem as its capital.

A senior US diplomat in Tel Aviv told Al-Monitor that the White House still intends to move ahead with its peace initiative and is in contact with all partners on the details. He claims that Washington is coordinating with international partners (primarily the EU) on a relief assistance package for the Gaza Strip, provided Gaza is run by the PA and not by Hamas. The EU, according to the US diplomat, is in fact considering an institutional presence in Gaza to monitor humanitarian relief and prevent funds from being channeled to terrorist purposes.

The US diplomat expressed concern about Hamas’ intentions to generate violence in May, marking the Palestinian Nakba Day on May 15 and protesting against the move of the US Embassy to Jerusalem.

Obviously, an agreement on moving the East Jerusalem neighborhoods (outside the Old City) to PA rule (as Area B under Palestinian civil rule with Israeli security control) could happen only with Israeli acceptance. And it could take place only in a broader context of an interim agreement.

The PLO official said that such an interim agreement must include several elements. It would have to include the move of one or two Palestinian East Jerusalem neighborhoods to Palestinian rule. It would also include stringent anti-terrorism measures in the West Bank and Gaza by the PA in cooperation with Israel. The PA would take over the rule of Gaza, alongside an international economic assistance program. The United States, the EU and Saudi Arabia would offer aid for Palestinian economic development in West Bank Areas A and B, and in cooperation with the Israeli finance minister also in Area C. Most importantly, an interim agreement would mark the beginning of negotiations between Israel and the PA on permanent status issues, including the recognition of Israel as the Jewish homeland.

Speaking with Al-Monitor, a senior Israeli Ministry of Foreign Affairs official reacted to the interim agreement idea with mixed feelings. Israel is in favor of the PA taking greater control over Gaza and supports increased international economic assistance to the West Bank and Gaza, but it will totally refuse a change in the status of East Jerusalem neighborhoods.

Still, given the possible outbreak of violence in May, mainly by Hamas, such measures and interim arrangements are of significance. More so, it would be imperative to reach such an agreement before violence also erupts in the West Bank, rather than after.

As to Israeli Prime Minister Benjamin Netanyahu’s readiness to an interim agreement, what he is willing to accept seems much too little.