After US President Donald Trump’s statements in Davos, Europeans and Palestinians fear radicalized US policies on the Middle East. 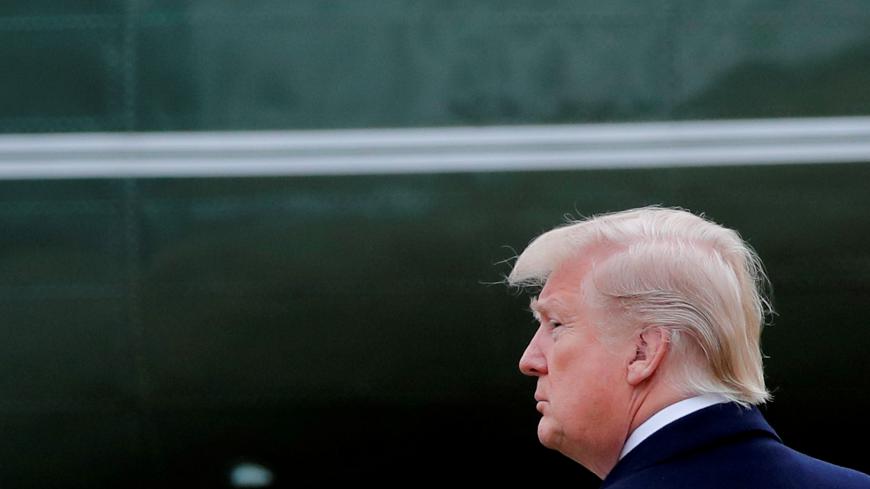 US President Donald Trump departs the White House for a trip to Lewisburg, West Virginia, in Washington, Feb. 1, 2018. - REUTERS/Carlos Barria

For the first time since the year 2000, a sitting US president arrived at the Swiss Alps town of Davos to take part in the World Economic Forum. But more than his mere participation, President Donald Trump shocked European and other guests by the statements he made there.

Referring to the Palestinian refusal to meet with Vice President Mike Pence Jan. 22, Trump attacked Palestinian President Mahmoud Abbas, stating, “They disrespected us a week ago by not allowing our great vice president to see them.” Even more dramatic and significant was Trump’s reiterated threat to cut US financial assistance to the Palestinians. He said, “Money is not going to them unless they sit down and negotiate peace.” Trump echoed former threats by his administration to slash funding by $65 million for the United Nations Relief and Works Agency for Palestine Refugees in the Near East.

This last threat was supposed to coerce Palestinian leadership into negotiations with Israel on a US peace plan. It will, of course, have the opposite effect, and it will harm the livelihood of Palestinians in refugee camps. The Palestinian leadership suspects that after having taken Israel’s position on the issue of Jerusalem, Trump is now planning to fully endorse Israel against the Palestinians’ right of return. A senior PLO official close to the Palestinian president told Al-Monitor that Abbas is reaching out on two levels to his Arab partners, including Egypt, Jordan and Saudi Arabia. He hopes to solicit alternative funds for the refugees and also to garner Arab support against a Benjamin Netanyahu-modeled peace plan by the US administration.

The official assessed that the outline of Trump’s plan has been orchestrated by his envoys Jared Kushner and Jason Greenblatt in cooperation with Netanyahu.

The PLO official added that this proposed plan is a dream come true for Netanyahu. In fact, it resembles Education Minister Naftali Bennett’s plans of annexing West Bank Area C (currently under Israeli control) and “uniting” Jerusalem. Speaking on condition of anonymity, the Palestinian source said, “There is not and will not be a Palestinian who would accept such plans as basis for negotiations. These US positions result from pressure by American evangelist and Jewish communities in order to enhance Trump’s chances to be re-elected in the 2020 elections.”

A senior European Union official close to High Representative for Foreign Affairs and Security Policy Federica Mogherini told Al-Monitor that leaders of European member states are highly alarmed by Trump’s apparent radicalization on Middle Eastern issues. This is true concerning issues other than the Israeli-Palestinian conflict. French President Emmanuel Macron has taken the role of building bridges of understanding with Trump, foremost on the Iran nuclear agreement. But in this case, too, Trump is leaning to pull the United States out of the agreement unless it is significantly changed. Paris fears that with time this may jeopardize the balance that is holding the agreement together. In such a setup, international trade with Iran would continue without Tehran feeling obliged to keep its part on canceling its development of nuclear arms.

As aforementioned, Brussels is highly concerned about the Palestinian issue. Abbas is obviously cornered and weakened. The winner in this situation is Hamas, mainly in the West Bank. The EU is aware of a growing rapprochement between Hamas, Hezbollah and Iran. The official said that if this trend continues, a cycle of violence with Israel involving pro-Iran forces in Gaza, Lebanon and Syria cannot be ruled out.

A Senior Israeli Ministry of Foreign Affairs official told Al-Monitor on condition of anonymity that the prime minister feels vindicated in his policies on the Palestinian and Iranian issues, and he will continue to pressure for changes in the Iran agreement and for a diplomatic boycott of Abbas.