Will EU take the lead on two-state solution?

The European Union is developing a new Middle East policy, which will not depend on the Trump administration. 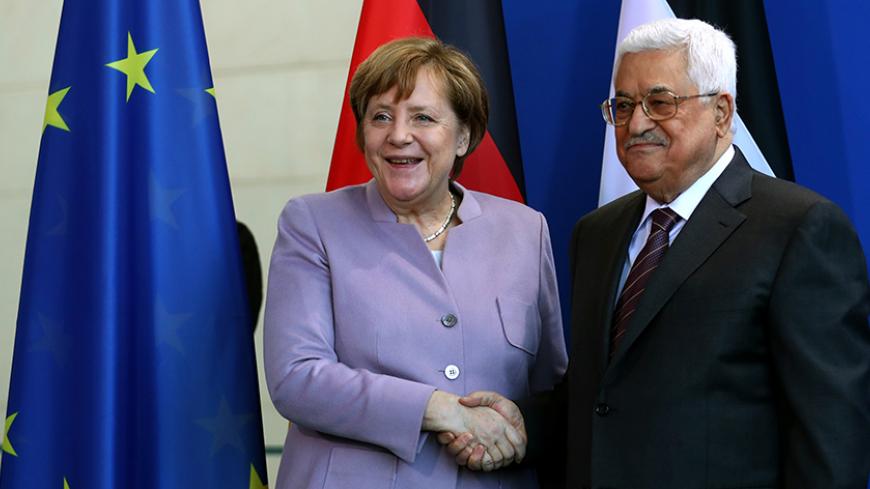 The EU leadership both at headquarters and in its main member states have become disillusioned with US President Donald Trump’s foreign policy. After Trump’s March 17 meeting with German Chancellor Angela Merkel and US Secretary of State Rex Tillerson’s Feb. 9 meeting with Federica Mogherini, the EU high representative for foreign affairs and security policy, it is clear to both Berlin and Brussels that on the main international agenda issues, the EU will have to develop an independent foreign policy. As an independent policy, it will not depend on US approval, but only on coordination with Washington. A senior EU official close to Mogherini told Al-Monitor on condition of anonymity that while the EU still sees the United States as the leader of the Western world, it is concerned about America’s growing isolationism and significant policy differences on key issues such as Russia, climate change, free trade and the Israeli-Palestinian issue.

With Brexit, a new European coalition is emerging that will be the main contributor to the shaping and defining of EU foreign and Middle East policy. This coalition will include Germany, France and the EU headquarters in Brussels. But the character of this coalition will ultimately depend on the identity of the next French president — be it Emmanuel Macron or Francois Fillon.

The leading candidate according to recent polls, Macron, held a long policy meeting with Merkel on March 16. A well-known French economist close to Macron told Al-Monitor on the condition of anonymity that the candidate supports a strong and united Europe. In terms of foreign policy, he is very much in line with Merkel, also in relation to skepticism of Russia’s international role.

The senior EU official told Al-Monitor that based on the current European setup, EU Middle East policy planners are exploring a two-state solution initiative that would probably be launched in June. Such an initiative would include several elements. Obviously, it would include freezing Israeli settlement construction according to Security Council Resolution 2334. It would also include halting official Palestinian incitement of violence. In essence, the initiative would propose an international peace conference with the participation of the Quartet (EU, US, UN and Russia), the Arab League and the parties based on the Oslo agreement, and the Arab Peace Initiative of 2002.

Other elements that the initiative would bring forward for a future Israeli-Palestinian agreement would be that the border between Israel and Palestine would be based on the 1967 lines (with mutual, parallel and agreed-upon land swaps), that Jerusalem would be a united city and the capital of the two states, and that the issue of Palestinian refugees would be resolved in a joint and agreed upon way. As aforementioned, the initiative would be based on the 2002 Arab Peace Initiative and would offer that Arab states normalize relations with Israel. In addition, the EU would support the Palestinian state-building process with modern institution building, economic support and security training. As for Israel, the initiative would offer an upgraded status in its various agreements.

The EU official said that nothing can be finalized until after the May 7 French elections and subsequent deliberations amid the EU’s leading member states. Despite the growing skepticism in Berlin and Brussels over possible policy agreements with the Trump administration, serious efforts will be made to coordinate Middle East policies mainly with Trump’s national security adviser Lt. Gen. H.R. McMaster and Tillerson.

On that same issue, a senior Israeli Foreign Ministry official told Al-Monitor on condition of anonymity that the Israeli government is aware of the policy schism between the United States and the EU and is actually encouraged by it. Israel will coordinate its policies only with Washington and will merely brief the EU on its position and arguments: “The Europeans, except the UK, are biased toward the Palestinians and are frustrated at having lost their leverage with the US. Prime Minister Benjamin Netanyahu is coordinating security, settlements, as well as other policy issues, vis-a-vis the White House only.”

The Palestinian side feels differently and is encouraged by the European positions. Palestinian President Mahmoud Abbas held a working meeting March 24 with Merkel in Berlin. According to a senior Palestinian official, Merkel was highly critical of Israel’s settlement policy and told Abbas that the EU will push only toward the two-state solution formula. Abbas sees Merkel as a powerful international partner. He also believes strongly that the traditionally good relationship of the Palestinian Authority with France will continue after the French elections. The Palestinians see June as an important month for diplomacy, as it will mark 50 years of the occupation.