The EU, headed by France and Germany, could replace US on Mideast

With US President Donald Trump largely working solo on the Israeli-Palestinian conflict, the EU is preparing its own initiative, which might be launched next fall. 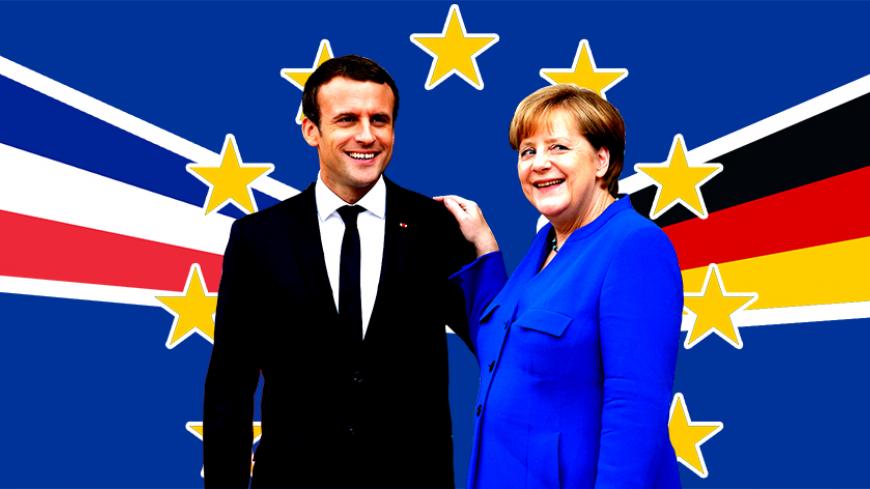 It is no secret that there is a considerable rift between the Donald Trump administration and the European Union. Trump fulfilled his election promises of an “America First” policy, objecting to globalization, regionalization, the European Union, free trade deals and climate change. He vehemently objects European immigration and refugee absorption policies. He does not hide his dislike of Europe’s strong women, namely German Chancellor Angela Merkel. On Syria he cooperates mainly with Russian President Vladimir Putin. On the Israeli-Palestinian issue, he largely works solo, in cooperation mainly with Egypt and the Arab Gulf states. He has developed a better personal relationship with French President Emmanuel Macron, mainly in order to have a European partner on anti-terror issues.

Brussels has witnessed a major shift in the EU-US relationship in the respective outlooks on economic and security policies. A senior EU official close to Federica Mogherini, the European Union high commissioner for foreign affairs and security policy, told Al-Monitor that given the internal and external situation, Brussels is compelled to develop a more independent foreign policy, including on Middle Eastern issues. Following the Brexit, the EU is headed today mainly by a German-French alliance — Merkel and Macron. With the economic might and influence of the EU in the international arena, Brussels, Berlin and Paris are determined to run an effective and more independent foreign policy.

The senior EU official told Al-Monitor that Brussels is particularly concerned with the Israel-Palestinian issue on the backdrop of recent violence outbreaks in the aftermath of the July 14 terror attack near the Temple Mount. Mogherini has been consulting lately on this issue with the German, French and Italian leaderships. They are all concerned that violence will spiral out of control, turning into an armed intifada. Mogherini is also in constant contact with US Secretary of State Rex Tillerson, but the US administration does not involve the EU in the ongoing efforts of its envoy Jason Greenblatt, except for periodic updates.

The way the EU sees the current situation, there is a real danger to the stability of Palestinian President Mahmoud Abbas’ regime. Abbas is coming under considerable fire from Hamas in Gaza, from allies of his Fatah rival, Mohammed Dahlan, and from radical Fatah members in the West Bank. The pragmatic Arab countries offered Abbas only rhetoric support in these difficult times.

Brussels foresees a prolonged crisis; not only in relation to the imminent events around Al-Aqsa Mosque, but also, and more so, concerning the general stalemate in the peace process. Adding to the developing crisis is the growing rift between Fatah and Hamas. In an attempt to support Abbas, the EU will enhance its economic assistance to the Palestinian Authority and keep an ongoing dialogue with the president.

Abbas met with Macron on July 5. Macron stuck to the traditional French position in favor of a two-state solution based on the 1967 lines with Jerusalem as a shared capital. With that, the EU official claimed that until the 2017 UN General Assembly meeting in September, Europe will not take any concrete initiative so it won’t be seen as disrupting the US efforts. Also, no joint European foreign policy decision will be made until after the Sept. 24 German elections.

According to the official, one can assume that if the United States does not launch a regionally-backed two-state solution process, Merkel (assuming she wins as expected in the upcoming elections) and Macron, together with EU headquarters, will launch a European initiative on the terms of reference for a two-state solution and a peace conference to be convened in Brussels.

“We are committed not to let this year pass without a serious effort in favor of a two-state solution,” said the EU official. He added that the alternative is a grave deterioration into greater violence by the more radical and fundamentalist elements in Gaza and the West Bank, which could indeed endanger Abbas’ regime. Brussels is holding constant dialogues on these issues with Egypt, Saudi Arabia, Jordan and the Arab League.

According to a senior Israeli Ministry of Foreign Affairs official, Prime Minister Benjamin Netanyahu is certain that Trump will block such a European initiative. Speaking to Al-Monitor on condition of anonymity, he stated, “We see Europe as hostile to Israeli interests and pro-Palestinian. The European leadership is probably frustrated to have been marginalized by the Trump administration.”

On the other hand, a senior PLO official told Al-Monitor that Abbas will welcome such a European initiative and that the issue indeed came up in the meeting with Macron. The Palestinian leadership believes that the EU should never be underestimated, he argued.

Be that as it may, such a European initiative may be too little too late.