Is EU giving up on Israel-Palestine conflict?

With the US preoccupied by elections, Egypt not committed, Palestinian President Mahmoud Abbas politically weak and Israel reluctant, the European Union is about to give up on the two-state solution process. 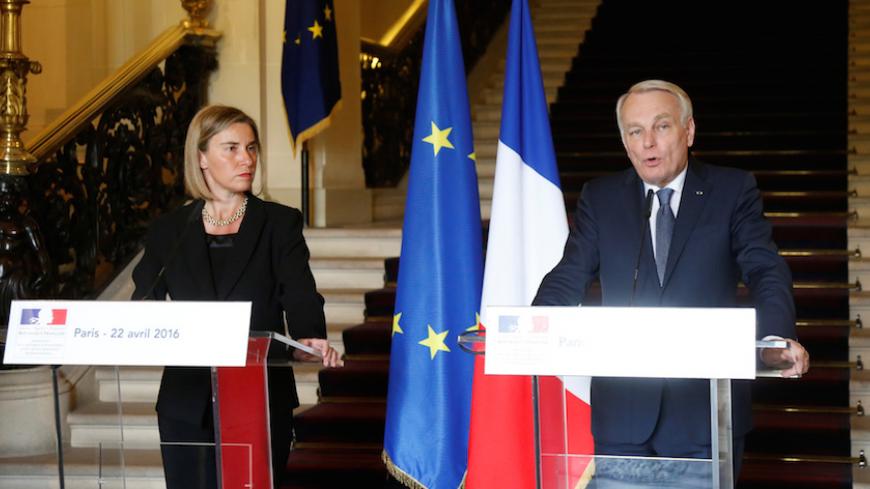 After much diplomatic activity by European Union headquarters and several European capitals, principally Paris, to revive a Middle East peace process, it seems today that the EU is about to give up on any chance to revive a two-state solution process in the foreseeable future. Europe is preoccupied with domestic challenges, first and foremost the refugees crisis, which is linked to Islamic State-inspired terror. European security, for the first time since the war in the Balkans, is now the main concern of Europeans in the aftermath of the terror attacks in Paris, Brussels, Nice and other places. These security threats challenge the pragmatic European democracies, sparking a rise in power of extreme right-wing parties. Also, following the "Brexit" vote, the cohesion of the EU is in question with the upcoming negotiations with the United Kingdom’s government of Prime Minister Theresa May.

There is therefore lesser interest in the Israeli-Palestinian issue. The diplomatic efforts that were made over the past few months by the EU were spearheaded by the dynamic EU High Representative for Foreign and Security Policy Federica Mogherini, together with the French Foreign Ministry. Yet the French Initiative and the Paris conference June 3 led nowhere.

A senior EU official close to Mogherini told Al-Monitor on condition of anonymity that Brussels is extremely concerned about possible significant violence erupting between the Palestinians and Israel, but that at this time there is not much the EU can do about it. “We must be realistic, the EU cannot impose a peace process. The European leadership is frustrated with all parties, and mainly with Israeli settlement policies. We will not say this publicly, but, at this point, we are giving up on launching a meaningful diplomatic effort,” the official said.

The official listed several reasons for this resignation. The first is the lack of enthusiasm among some prominent member states, primarily the United Kingdom and Germany, for the EU to be in the forefront of initiating a Middle Eastern peace process. May is preoccupied with the Brexit process and German Chancellor Angela Merkel is hesitant to publicly express her critical position of Israeli settlement policies.

The second reason is related to the US elections. Brussels had hopes for a more proactive position on a two-state solution by US President Barack Obama, even on the eve of the elections. But now the EU assesses that the Democratic Party leadership does not want to confront the American-Jewish community on a two-state solution proposal. Europe realizes that without US involvement, the Israeli side is unlikely to shift any of its positions.

Third, the French Foreign Ministry (Quai d’Orsay) is disappointed with the lukewarm Egyptian position toward the French initiative. Cairo under President Abdel Fattah al-Sisi seems less preoccupied with the Palestinian statehood issue, focusing mainly on the weakening of Hamas and the defeat of Islamist terrorists in the Sinai Peninsula. Palestinian President Mahmoud Abbas needs Egyptian backing for his pragmatic positions — backing that he is not receiving at the moment.

The same official said that the Palestinians have not shown much moderation on permanent status issues such as the refugee crisis. Brussels needs to see such moderation on the Palestinian side to convince Washington to move together on a realistic policy initiative. The EU is very concerned with the political weakness of Abbas, given the peace process vacuum and a beginning of a succession battle in Ramallah.

The last reason cited by the EU official was Israel's unwillingness to engage in a diplomatic process. EU leadership clearly sees Israel as the main culprit for the prevailing diplomatic stalemate. Jerusalem has not been receptive to any of the EU moves — be they in the context of the French initiative or the Quartet recommendations. Settlement expansion, de facto annexation policies in Area C and Defense Minister Avigdor Liberman’s hawkish position all make a viable process impossible in the view of Brussels.

A senior Israeli Foreign Ministry official reacting to these positions told Al-Monitor on condition of anonymity that the EU had never played a role in the Middle Eastern peace process as the position of most member states is tilted toward the Palestinians. The official said, “The EU initiatives this year only hardened Palestinian opposition to direct negotiations, as they create an illusion in Ramallah that a state can be realized without negotiations. If the EU becomes a more passive observer, we would welcome it.”

Indeed, the EU giving up on a realistic peace process in the foreseeable future would present a diplomatic victory for Prime Minister Benjamin Netanyahu. But it is a dangerous development as, together with the US transition, it could lead to even greater despair among the pragmatists in the Palestinian Authority. If the Israeli-Palestinian issue remains on the international diplomatic back burner, there will be only two options left: a process of a binational state in the making or a process of violence. This is the grim outlook for 2017.