EU has new plan for Israeli-Palestinian peace, but will it work?

The EU is contemplating a three-pronged plan that includes curbing settlement expansion though labeling goods, advancing a UN resolution and organizing a regional peace conference. 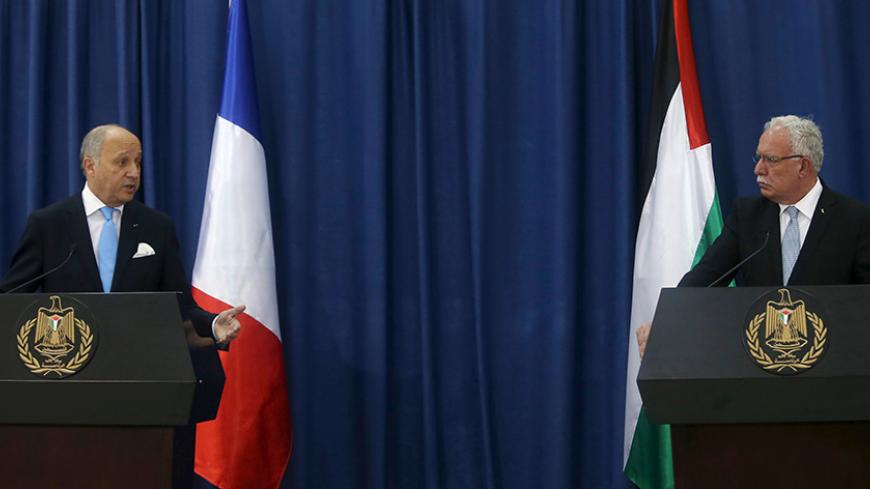 While the leading European Union foreign ministers are primarily preoccupied with the refugee crisis and the implementation of the Iran agreement, there is growing pressure from some key players to be more assertive in advancing a two-state solution for Israel and Palestine. These key players include High Representative of the Union for Foreign Affairs & Security Policy Federica Mogherini and the foreign ministers of France, Spain and Italy (Laurent Fabius, Jose Manuel Garcia-Margallo y Marfil and Paolo Gentiloni).

A senior foreign policy source in the EU headquarters in Brussels told Al-Monitor on the condition of anonymity that despite improving relations between the EU and the United States due to the Iran deal, there is a divide in policy outlook when it comes to the Israeli-Palestinian issue. It has been made clear to the EU leadership that President Barack Obama is not going to engage in a dynamic effort to revive peace talks. At most, the United States will be involved in efforts to prevent violence in and from the West Bank and Gaza.

The EU acts according to a different timeline and perceives an urgent need to strengthen the status of Palestinian President Mahmoud Abbas to ensure his place in the moderate camp. The Brussels source told Al-Monitor that the EU member states will act in three directions.

The first step will be curbing Israeli settlement expansion. Next month, all 28 EU member states will begin labeling goods imported from Israeli settlements. This move could hurt Israeli exports and for the first time make Israel a target of economic sanctions. This plan may be implemented more rigidly by some member states (France, United Kingdom) and less by others (Germany, Holland), but there is a broad consensus among the 28 EU foreign ministers about the need for such a policy.

The second path will be at the UN Security Council, spearheaded by France together with New Zealand. French Foreign Minister Fabius plans to table a resolution calling for a two-state solution based on the 1967 lines with a two- to three-year timeline of implementation. The French chief of diplomacy is still attempting to convince the United States not to cast a veto, but so far without success.

The third and new element relates to policy planning in Brussels and in Paris about a possible EU peace initiative. According to the senior Brussels source, Middle East policy analysts at the EU headquarters are elaborating on basic parameters for such an initiative to be discussed with EU capitals. Its purpose will be to create a framework upon which the regional parties, together with the United States, Russia and China would be invited to an international peace conference — a kind of Madrid II conference. This conference, which could take place in Brussels or in Paris, would launch bilateral and multilateral negotiations. These direct negotiations between the parties would focus on a two-state solution and on regional cooperation, including security matters. It would constitute a permanent secretariat for the monitoring of negotiations.

A senior policy analyst at the French Foreign Ministry confirmed to Al-Monitor on condition of anonymity that an initiative along these lines is being discussed internally in Paris and with other member states. Fabius is determined to bring about progress on the Palestinian track given the dangers that a political stalemate poses to regional stability. The convening of an international peace conference would be based on the fundamental EU positions of a Palestinian state, namely its borders (based on the 1967 lines), its capital in East Jerusalem, stringent security measures against terror directed at Israel, economic assistance and cooperation, an end to the conflict between the two nation states and regional normalization of relations. The wording of its terms would be coordinated with the US administration, with the hope of an American go-ahead, yet without direct US involvement at the earlier stages. The Paris Quai d'Orsay source told Al-Monitor that the Palestinians do not reject such ideas, but are skeptical of any initiative that is conditioned on Israeli acceptance.

As to Israel, Prime Minister Benjamin Netanyahu has made it publicly clear that he is ready to begin negotiations with Abbas, but without any preconditions or terms of reference. Therefore, it is hard to be hopeful about such policy initiatives with a main purpose of delaying a major regional crisis looming because of the diplomatic stalemate. Without active American involvement, no movement toward a peace process is likely, whatever good intentions the EU leaders may have.