As a first step to relaunch a two-state solution process, France will convene at the end of May a conference of stakeholders, without the Israelis or the Palestinians. 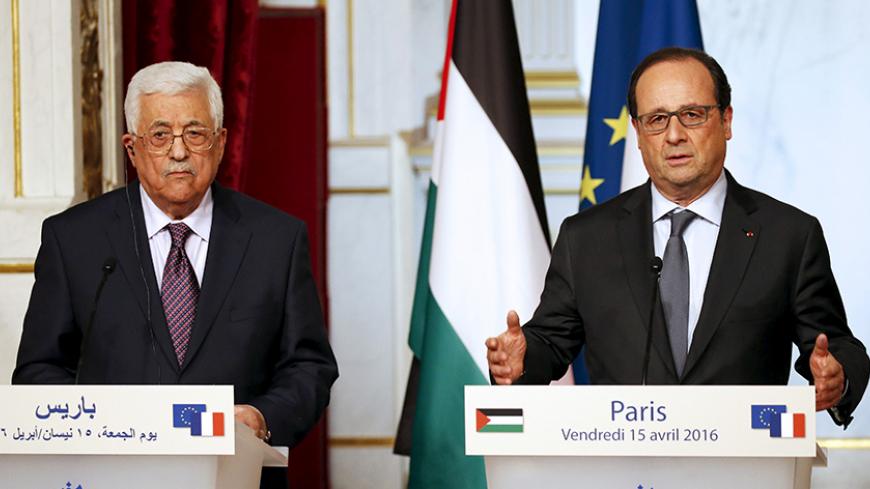 Palestinian President Mahmoud Abbas (L) and French President Francois Hollande make a joint statement after a meeting to discuss France's initiative for peace in the Middle East at the Elysee Palace in Paris, April 15, 2016. - REUTERS/Charles Platiau

The Paris conference on a two-state solution process, which will be convened May 30, is the first concrete step related to the Israeli-Palestinian peace process since the shuttle diplomacy of Secretary of State John Kerry in 2013-14. The French are inviting the Middle East Quartet representatives (United States, European Union, Russia and the United Nations), the Arab League and approximately 20 foreign ministers. Israel and Palestine are not invited, as the French want to prevent an Israeli no. The purpose is to convene a more operative international peace conference later in the summer in order to launch talks on a two-state solution between the parties themselves.

This is good news for Middle East peace hopefuls. A Washington conference would have been more useful, but probably out of the question in a US election year. France has decided to walk into the policy vacuum produced by US passivity and despair. This move reflects European concerns that, without a realistic prospect for a two-state solution process, the Israeli-Palestinian equation will be filled with growing violence, which compromises the position of moderate Palestinian President Mahmoud Abbas. All EU partners share this view — some with greater enthusiasm (such as EU High Representative for Foreign Affairs and Security Policy Federica Mogherini), some with less (such as German Chancellor Angela Merkel).

The French move comes in the aftermath of active shuttle diplomacy by Paris’ special envoy Pierre Vimont. French Foreign Minister Jean-Marc Ayrault will be visiting Jerusalem and Ramallah in mid-May, and he will continue holding talks with Kerry.

The US administration’s position is the missing link to a successful diplomatic effort. It is not clear yet what kind of policy risk President Barack Obama is ready to take, in light of the possibility of failure, or even a domestic risk given the US election year. The American representative in Paris will most probably not be Kerry himself, but rather a senior official or the US ambassador to France.

A Quai d’Orsay (French Foreign Ministry) official told Al-Monitor on condition of anonymity that French President Francois Hollande is determined to advance toward a two-state process. “A policy void is a prescription for violence or an armed intifada also directed against President Abbas. We see the Arab League as an important partner and favor the Arab Peace Initiative of 2002 as the basis of a two-state solution based on the 1967 lines with a shared capital in Jerusalem. We will insist on security measures for Israel,” said the source. He added that Ayrault will attempt to convince Israeli Prime Minister Benjamin Netanyahu that such an effort is in favor of Israeli security. Ayrault is well-coordinated with Mogherini and wants to integrate the upcoming Quartet report on a two-state solution process that lists obstacles and recommendations for its renewal into the French diplomatic move.

Above all, the sense in Paris is that of urgency and of preventing both Israeli settlement expansion and Palestinian sporadic terror to destroy a realistic hope for a two-state solution. In parallel, Washington naturally attributes importance to any potential regional progress. The French initiative comes at a time when the US administration is debating intensely how to leave a viable two-state solution policy platform to the next administration. According to a US diplomat in Tel Aviv talking to Al-Monitor on condition of anonymity, Washington is fully updated on the French diplomatic efforts. The administration, while not part of the initiative, has not asked Paris to refrain from convening the conference.

Given that in the past the United States has always taken the lead on such initiatives, the French move may signal a turning point in the nature of international diplomatic activity on the issue.

The importance of the conference is not only in injecting hope into the region, but also in attempting to reach a global consensus on the policy issues of a two-state solution, as well as drawing up a methodology for progress. The French are aspiring to formulate a common position in the same way that the international community and the P5+1 (the five permanent UN Security Council members and Germany) operated when developing the joint approach on the issues of Syrian chemical weapons and Iran’s nuclear ambitions. Conflict resolution today demands collective international diplomacy on the highest levels. The United States can and must be part of such a consensus — in the case of the French initiative and especially in regard to the Quartet position and the report that is being developed these days. For the French initiative to have a concrete impact on the future of Israeli-Palestinian negotiations, it should be based on detailed positions of the Quartet approved at the conference and combined with a realistic timeline for convening a conference with the parties, leading to negotiations on a two-state solution.