The Palestinian leadership considers the French initiative and international support of the Paris conference the last opportunity for diplomacy. 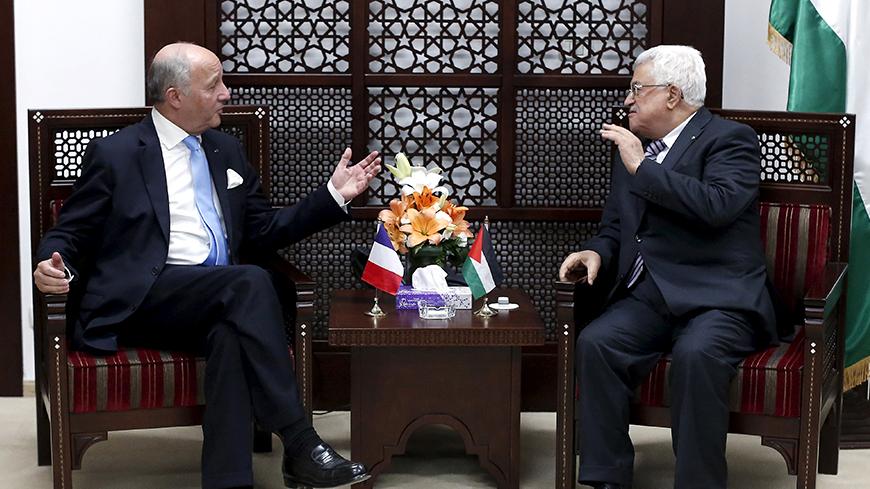 The most remarkable thing about the Paris Middle East conference that convenes on May 30 will surely be the absence of Israel and Palestine. It will be a two-state solution conference without the two states. Palestinian President Mahmoud Abbas would have loved to participate, but Prime Minister Benjamin Netanyahu is glad to stay at home surrounded by the yes men (and women) of his cabinet. The last thing on the Israeli prime minister’s mind at this point is any progress on a two-state solution. He swore before the last March 2015 Israeli elections that no Palestinian state will be established during his tenure and he intends to keep his promise to his loyal constituency.

At their Élysée meeting on April 15, Abbas told French President François Hollande that he fully supports the French initiative. According to a senior Palestinian Authority official who spoke to Al-Monitor on condition of anonymity, Abbas is closely coordinating with the Arab League and Egypt regarding the upcoming conference. The Palestinians are determined to achieve the creation of a new international platform for a two-state solution based on the 1967 lines with a reasonable timeline for the establishment of statehood.

The Paris conference may also mark a turning point for the Palestinians regarding the attitude of the Arab countries toward their cause. According to the senior Palestinian source, there has been much disappointment in Ramallah with other Arab governments, whose attention over these last few months has mostly been focused on the Iran deal and the fight against the Islamic State. Now, the Palestinian leadership believes that the French initiative could redirect the attention of Egypt and of the Gulf states back toward the Palestinian issue.

The Palestinian official told Al-Monitor that the leadership in Ramallah considers the French initiative and international support of the conference the last opportunity for diplomacy to stall an armed intifada. The official expressed concern that failure now could endanger the moderate policies of Abbas, risk Palestinian security cooperation with Israel and perhaps even threaten the survival of the Abbas regime. “We have come to a ‘now or never’ point. The Obama administration must decide to give a chance to diplomacy first at the Paris conference, and thereafter at the [UN] Security Council,” he argued. Indeed, it is the Palestinians' intention to ask France and Egypt to put on the table a Security Council resolution based on the outcomes of the Paris conference.

In Israel, reactions to the French proposal are diametrically opposed. A senior Foreign Ministry official involved in the preparations for French Foreign Minister Jean-Marc Ayrault's visit to Israel in mid-May told Al-Monitor on condition of anonymity that Netanyahu will suggest to the French a call for immediate and unconditional negotiations between Israel and the Palestinian Authority: “The prime minister views the French initiative very negatively, as a pre-determination by the international community of the outcome of negotiations," he noted. The Israeli official added that the embassy in Washington actively seeks pressure by both Republican and Democratic members of Congress to block any diplomatic move by President Barack Obama in support of the French initiative or at the Security Council regarding a two-state solution. The American Israel Public Affairs Committee and the Conference of Presidents of Major American Jewish Organizations are part of this lobbying effort.

With their initiative, the French face skepticism on the part of the international community, hesitation by the US administration, total rejection by the Israeli government and excessive Palestinian expectations for a breakthrough.

And yet Paris is doing what needs to be done. The conference initiative is motivated not by the chances of its success, but by the significant dangers of a policy vacuum. Hence, the Palestinians would be well advised to curb their enthusiasm. At best, the Paris conference may become a modest building block for a future international structure for Israeli-Palestinian conflict resolution; a type of P5+1 that will evolve after the US elections. It could become a basis for a two-state solution process. For such an outcome to evolve out of the conference, the Palestinian leadership must convince both the United States and the European Union that it is ready to compromise, with time, on key positions regarding the permanent status issues, such as the right of return for Palestinian refugees and stringent anti-terror security arrangements on the borders of a demilitarized Palestinian state.

As for the Israeli government, it should comprehend that the more rejectionist its positions are on a two-state solution, the more international pressure will be exerted on it. From the Israeli point of view, the Paris conference may be only the tip of the iceberg. Israel’s settlement expansion and its occupation policies stand in full contradiction to an evolving international policy consensus.