After Paris — a Moscow conference on Mideast peace?

Palestinians are now developing a follow-up strategy to the Paris II conference, and are hoping for a Moscow conference in the near future. 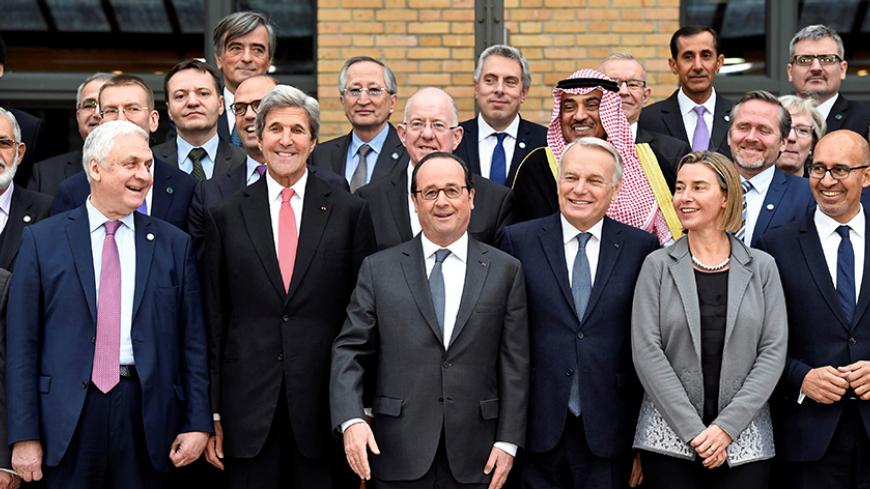 There is a real sense of satisfaction among the Palestinian leadership about the outcome of the Paris Middle East peace conference that took place Jan. 15. Nevertheless, in their usual manner, Palestinian representatives complained that the Obama administration prevented clearer resolutions on permanent status issues.

That said, a senior PLO official close to President Mahmoud Abbas, who spoke to Al-Monitor on condition of anonymity, said outgoing Secretary of State John Kerry will be missed, given his honest ambition to advance Palestinian statehood.

He claimed that the call to both parties — the Palestinian Authority (PA) and Israel — to negotiate directly is not taken seriously in Ramallah; neither are the economic and political incentives proposed by the conference participants, or the calls for confidence-building measures. The reason for this negative reaction lies with the Israeli annexation policies, preventing any possibility of a dialogue. Abbas believes that he was successful in convincing the international community that the Israeli government is the culprit behind the dangerous diplomatic stalemate.

The Palestinian leadership in the aftermath of the Paris conference has opted for a diplomatic follow-up strategy, for the weeks and months ahead.

This strategy includes preventing at all costs the moving of the US Embassy from Tel Aviv to Jerusalem. Ramallah has called on the Arab League and the Organization of Islamic Cooperation to warn Washington of severe consequences in case of such a move by the Trump administration, including the suspension of diplomatic relations with Israel by Egypt and Jordan.

Another element of this strategy is working to transform the Paris conference into a permanent international effort. Following the two conferences in Paris, and given the French elections in May, the Palestinian leadership is turning to Russian President Vladimir Putin to hold the next conference in Moscow later in 2017; PLO Secretary-General Saeb Erekat already met senior Russian officials in Moscow on Jan. 13. Such a conference in Moscow should continually deal with international permanent status positions and the role of various countries in contributing to it.

Also, following up on the Paris conference conclusions, United Nations Secretary-General Antonio Guterres and European Union headquarters will be encouraged to assist the PA in its nation-building process, both economically and on the civil society level.

Finally, the Palestinians would advance the idea of another UN Security Council resolution on terms of reference for permanent status based on the Arab Peace Initiative.

A senior Israeli Foreign Ministry official who spoke to Al-Monitor on condition of anonymity bluntly criticized the Paris conference as a Palestinian-French maneuver with the backing of the outgoing Obama administration designed to isolate Israel.

He said, “The result of the conference will only harden the Palestinian objections to unconditional direct negotiations. The outcome of the conference, like the French initiative or the speech of John Kerry, is a veiled attempt to predetermine permanent status in ways that the Israeli government will never accept.”

He added that Israel’s diplomatic efforts will focus now on developing a joint strategy with the incoming Trump administration leading up to a summit meeting between President Donald Trump and Prime Minister Benjamin Netanyahu. “Our aim is to place the onus for the stalemate in the peace process on the Palestinian side, instead of the settlement policy that was the case with the Obama administration,” he said.

The senior diplomat said informal talks have already begun with officials in Trump’s security and foreign affairs teams about a joint statement to be released right after the upcoming summit meeting in the Oval Office. Israel would like the new president and secretary of state to declare that any negotiations on a two-state solution should be bilateral, and that such talks could be launched only once the PA stops incitement to violence and recognizes in principle Israel as a Jewish state. Israel is therefore unimpressed and undeterred by the Paris conference outcome.

And so, in the aftermath of the Paris conference, two parallel and contradictory processes are taking place: a follow-up on the Paris II conference by the Palestinians who seek inter-Arab and Russian support, and a strengthening new Israeli-American connection, which aims to sideline the forces that brought about the Paris conferences.

As part of its follow-up strategy, the Palestinian leadership is also planning to hold a dialogue with the Trump administration, mainly on preventing a move of the US Embassy to Jerusalem. Yet the Palestinians' main focus is on convincing the Russian leadership to prevent such an American move, and for the Russians to take over from the French the efforts to create a platform for a two-state solution. One cannot exclude that in the near future, after the Paris conference and Trump’s inauguration, Russian President Vladimir Putin will become an essential player on the Israeli-Palestinian issue.