The United States, France and Russia could join forces to form a new Middle East axis that will promote the two-state process. 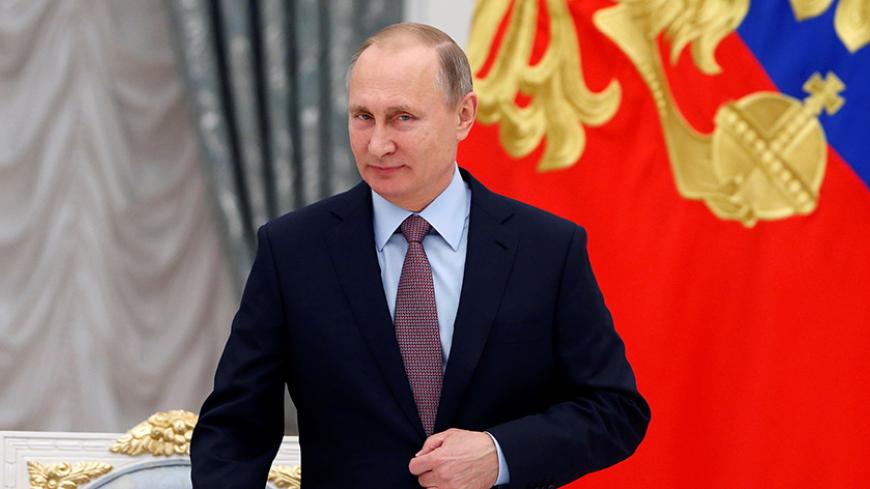 Russian President Vladimir Putin attends a meeting of the Presidential Council for Strategic Development and Priority Projects at the Kremlin in Moscow, Russia, Nov. 25, 2016. - REUTERS/Sergei Ilnitsky/Pool

In his Nov. 30 Fatah convention speech, Palestinian President Mahmoud Abbas expressed readiness to talk to the new Donald Trump administration about a two-state solution. But despite this readiness, the Palestinian leadership is looking for alternatives in the international community to advance Palestinian statehood in 2017. A senior PLO official close to Abbas told Al-Monitor on the condition of anonymity that the Palestinian leadership is reaching out to Russia for active intervention on a two-state solution based on the 1967 lines.

Abbas spoke about this in detail with Russian Prime Minister Dmitry Medvedev during Medvedev’s visit to Jericho on Nov. 11 and asked him to convey an urgent message in this regard to Russian President Vladimir Putin. The source explained that according to Palestinian analysis, Putin will probably be one of the only world leaders to whom Trump will listen.

The Palestinians are suggesting to Moscow to include a two-state solution based on the 1967 lines within a regional deal that could be brokered between Trump and Putin in the coming months. The Palestinians estimate that such a deal would include US-Russia cooperation in Syria in favor of President Bashar al-Assad’s rule in order to solidify the joint fight against the Islamic State and guarantee the basic parameters of the Iran nuclear agreement.

In this context, Ramallah is now asking Moscow for Palestinian statehood within a realistic timeline to be part of an eventual US-Russia deal. The Palestinian leadership believes that Russia’s positions on the Israeli-Palestinian issue are close to those of the Palestinians, and it also estimates that the Israeli leadership’s respect for Putin could be useful here.

Furthermore, the Palestinian leadership foresees a change in the nature of Middle East collective diplomacy in the course of 2017 — especially after the April/May 2017 French elections. If French Republican party candidate Francois Fillon wins the elections, a new Middle East axis of the United States, Russia and France could emerge.

A Russian diplomat in Tel Aviv told Al-Monitor on the condition of anonymity that Russia is indeed interested in playing an influential and helpful role in favor of a two-state solution. Moscow is planning to invite Prime Minister Benjamin Netanyahu and Abbas to a summit meeting with Putin in Moscow. This is one of the issues that will surely be dealt with in the Putin-Trump contacts once Trump takes office. Russia, according to this diplomat, supports Palestinian statehood on the 1967 lines, but also favors stringent security and anti-terror arrangements for Israel.

Putin enjoys a good relationship with both Netanyahu and Abbas. But according to the Palestinian source, Abbas will accept Putin’s invitation only on the basis of a commitment to launch an international peace conference leading to a two-state solution based on the 1967 lines with East Jerusalem as a capital. Such a conference, according to the Palestinian official, must refer to clear terms of reference on all permanent status issues on the basis of the 2002 Arab Peace Initiative. The Palestinians will demand a two- to three-year timeline for negotiations and implementation. The PLO official added that “the time for US monopoly on the Middle East peace process is over. These processes have failed because all American presidents automatically adopted entirely the Israeli bargaining positions — from the [1991] Madrid Conference to the John Kerry initiative. President Trump may adopt similar positions, but he is likely to coordinate US regional moves with the Russian leadership.”

An Israeli Ministry of Foreign Affairs official told Al-Monitor on the condition of anonymity that these Palestinian ideas were “complete nonstarters.” Netanyahu, he noted, is confident that he can coordinate with the new US president an American commitment to not support any one-sided international policy initiative — neither at the Security Council nor in any other international forum.

Clearly, the Palestinian leadership is now looking for ways to promote a new multilateral framework for conflict resolution in favor of Palestinian statehood. It is far too early to say whether a new US-Russia-France axis has a chance to produce diplomatic results, but in this new era of international unpredictability brought about by the US election, a change of that sort cannot be ruled out.