The disappointing Paris peace conference should convince Palestinians of the need to develop a strategy of their own and not to rely on the international community to end the Israeli occupation. 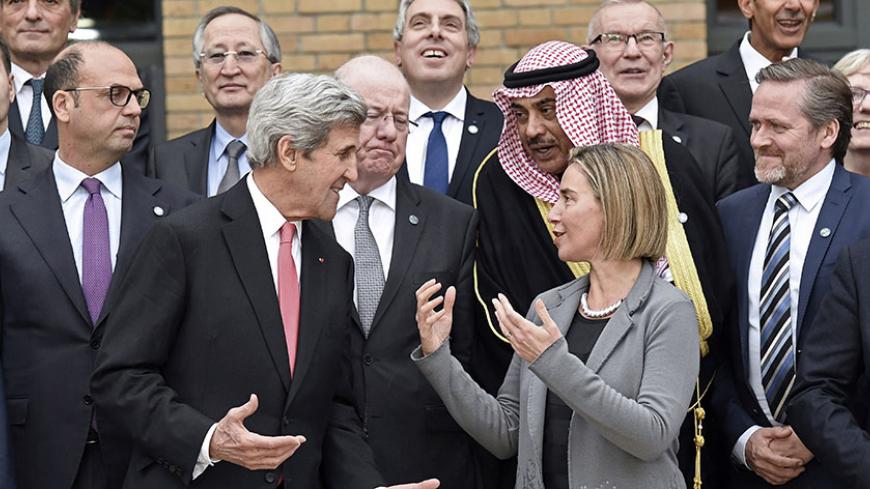 US Secretary of State John Kerry speaks with European Union Foreign Policy Chief Federica Mogherini as they take part in a picture during the Mideast peace conference in Paris, France, Jan. 15, 2017. - REUTERS/Bertrand Guay

When in January 2016 French Foreign Minister Laurent Fabius announced an international conference in Paris to address the Israeli-Palestinian conflict, Palestinians were hopeful. Fabius had warned that if Israel refused to go along with the plan, France would recognize the state of Palestine. The conference called by Paris was held on Jan. 15, 2016, and attended by 70 foreign ministers from relevant countries, with the exception of those from Israel (which refused to take part) and Palestine (which was not invited after Israel's rejection). Fabius did not stay in office long enough to follow through himself, and the peace conference he announced failed to reach a breakthrough or usher in French recognition of the state of Palestine. The conference’s joint declaration merely stressed support for a two-state solution and opposition to Israeli settlements.

Nabil Shaath, a senior Palestinian official and former chief negotiator, told Al-Monitor that the idea of the conference, the conveyor of the plan and the conference’s conditionality seemed like the perfect forum for the Palestinians. “We supported the French plan because it came from a leading European country, included a broad international presence and it cleverly circumvented the Americans, who usually obstruct such international efforts,” Shaath said.

He also said that the Palestinians had been hopeful that if Israel rejected the conference, France would recognize Palestine, and Paris' move would be followed by 10 other European countries recognizing Palestinian statehood. Israel indeed rejected the conference idea, insisting that only direct talks can produce peace, and as of yet, no other European country has followed the example Sweden set in 2014 and recognized Palestine, based on the 1967 borders, although some national parliaments, including France's, have called on their governments to do so.

Thus, in the end, the Paris conference results were limited, and the French promise to punish Israel for not attending never materialized. Shaath said that the writing was already on the wall in May 2016, when the French prime minister visited Israel. “When Manuel Valls visited the region, he made it clear to the Israelis that France would not recognize Palestine and would not support sanctions and boycotts [against Israel],” Shaath said. Even with these promises, the Israeli government still refused to attend the Paris conference, and as Shaath noted, “France couldn’t get the EU to support even a watered-down statement because of the hesitation of Germany and the United Kingdom.”

In a Jan. 23 article for the Watan website, Palestinian legislator Mustafa Barghouti discussed the negative attitude of conference attendees, writing, “Some of the conferees were in a rush to end the conference quickly in order to close this chapter that was forced on them and was angering the Israelis.” Barghouti, a respected Palestinian politician and activist who serves as general-secretary of the Palestinian National Initiative, also known as Mubadara, noted that the conference failed to accomplish one of the most important goals it set out to address: “The biggest weakness of the conference was the insistence that the Palestinians' state is dependent on the results of direct negotiations, [as] everyone knows that Israel is not interested in negotiations that would end its occupation,” he remarked.

Shaath believes that the United Kingdom abstained from voting for the final communique because of Brexit. “After the Brexit vote, Britain is moving away from the European consensus and desiring to get closer to the Donald Trump administration and its policies,” he asserted. Shaath added that despite Washington’s recent abstention in the vote on UN Security Council Resolution 2334, affirming the illegality of Israeli settlements, the Americans were not sold on the Paris conference. “[US Secretary of State] John Kerry had called [Israeli Prime Minister Benjamin] Netanyahu and promised him that he was going to Paris in order to ensure that there was no follow-up to the conference.”

On Jan. 15, the Israeli media reported on the call Kerry made to Netanyahu, in which he promised to water down the conference communique and that no additional actions would be taken at the United Nations before President Barack Obama left office on Jan. 20. Sure enough, the joint declaration did not outline further steps — although prior to Jan. 15, France had said that the conference would create follow-up committees — and the United Nations did nothing further.

The Paris conference was a big letdown for Palestinians. The conference of foreign ministers did, however, demonstrate that there is opposition to illegal Jewish settlement in the occupied territories and sent a message to Washington not to alter the status of Jerusalem.

For Palestinians, the failure of the conference to move the peace process along is yet another reminder that they need to stop pinning their hopes on the international community and develop a strategy of their own. As long as the Israelis pay no price for their actions (or inaction), they are unlikely to make substantive moves toward genuine peace. An end to the Israeli occupation will not happen unless Palestinians are solidly united and agree on an effective strategy that creates costs for the Israelis for their continued occupation and refusal to accept the basic need for peace.