Israel had hoped that the Paris conference initiative will fade away, the way the French initiative for a UN resolution on Palestinian statehood was sidelined. 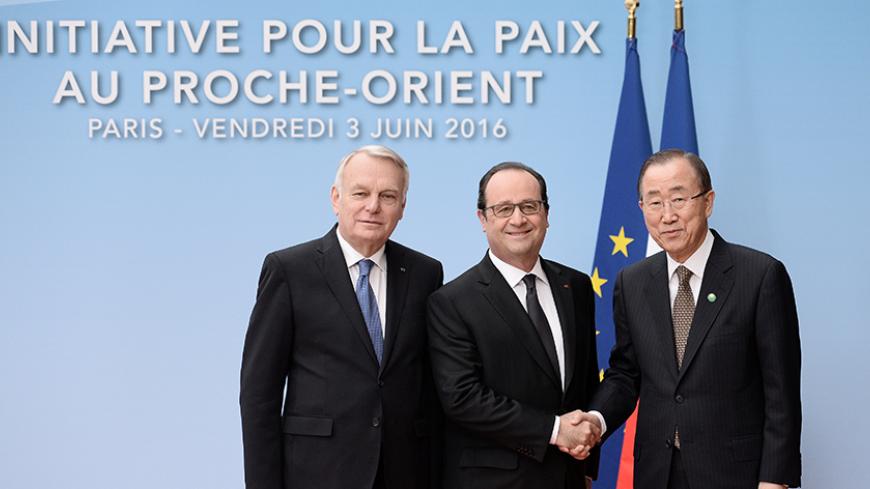 PARIS  — ''We feared that we might receive just lip service approval; that our partners would agree, but not really engage. But at the end of the day, the partners present here and also several others have shown enthusiasm and commitment to this initiative,'' a French diplomat told Al-Monitor today, while waiting for the final June 3 Paris conference communique to be published.

Indeed, “enthusiasm” was the word repeatedly mentioned today in the corridors of the French Foreign Affairs Ministry. After deliberating for many weeks over a 50-something page draft, French Foreign Minister Jean-Marc Ayrault presented a short, clear and concise communique sketching the framework (UN Resolutions 242 and 338, and the Arab Peace Initiative) and the timetable (an international conference for the two-state solution by the end of the year) agreed upon by the 29 participants.

The Israelis and the Palestinians were not present at the French Ministry's hall while French President Francois Hollande made his speech inaugurating the conference, yet Hollande's words were directed at both Jerusalem and Ramallah. With US Secretary of State John Kerry sitting to his one side and UN Secretary-General Ban Ki-moon on the other, Hollande specified that a void always fills up, that evidence to this effect can be seen in Iraq, Syria and Libya, and that the status quo only strengthens extremism. "The threats and priorities [in the Middle East] have changed. The changes make it even more urgent to find a solution to the conflict, and this regional upheaval creates new obligations for peace," Hollande said.

Trying to reassure Israel, Hollande also stressed that, ultimately, the two sides must be the ones to make the courageous decision of peace, and that France has no ulterior motive apart from advancing peace. In a specific message to Israelis, Hollande mentioned the speech by late French President Francois Mitterrand at the Knesset in 1982, warning against any unilateral steps that Israel could envisage. The French kept insisting throughout the conference about using the Arab Peace Initiative as a basis for a future arrangement — a basis that should benefit Israel greatly on the economic and regional cooperation fronts.

Yet Jerusalem is not reassured. Far from it. Since the beginning of the Paris initiative, the Palestinians were onboard. Israel for its part rejected the conference idea all along, a message that was relayed unequivocally to French envoy Ambassador Pierre Vimont on his numerous contacts with Israeli officials and later to Ayrault and French Prime Minister Manuel Valls, when each visited Israel recently.

Paris did not really expect that Israel would embrace the initiative, but a French diplomatic source indicated on condition of anonymity that both Israel and the Palestinians agreed that ''perhaps starting without them would actually be beneficial.'' Israel, he added, did not ask to be invited as an observer, and the French didn't offer. An Israeli diplomatic source feels differently, stating that the French as a habit translate every absence of a clear “no” into a “perhaps,” a “maybe” or a “yes,” ''which was probably the case this time around as well.''

In an attempt to counter the anticipated Israeli rejection, the French developed a pre-emptive strategy by inviting ''both sides'' — without inviting Israel and the Palestinians. They invited 28 countries and entities (the United Nations, European Union and the Arab League were the nonstate participants), including South Africa and Sweden, which advocate strong pro-Palestinian lines on the one side, and Canada and Italy, which are considered closer to the Israeli position on the other. Thus, they tried to get everyone on the wagon, committed, before there was actually a proposal to be committed to.

Israel was actually caught unprepared for the Paris initiative. The former French initiative — launched by former Foreign Minister Laurent Fabius for a UN resolution recognizing a Palestinian state and forcing a two-year deadline — was destined to fail. Even Paris came to realize that. But the current Paris conference seems to be a different story altogether. With the Americans engaged in presidential elections and following Kerry's unsuccessful mediation efforts in 2014, Ayrault recognized an international diplomatic void and charged forward. With only a year and a half before elections in France, this was his great chance, and he grabbed it.

Jerusalem thought the Paris conference would slowly fade away, much like the UN resolution idea, but Jerusalem was wrong. The fact that the United States was not really willing to engage in this French adventure did not deter France. Hollande changed the pre-scheduled date, just so that Kerry could participate, and managed to convince Ban to come. These two personalities offered the initiative an international stamp of approval, transforming it from ''just another French initiative'' to the real thing. A source at the French Foreign Ministry said that the Egyptian enthusiasm and willingness, alongside Palestinian support, encouraged the French in their efforts to move forward.

When Jerusalem understood that the conference was indeed going to happen and that the French had managed to get the representatives of the Security Council on their side, it was too late. Israeli Prime Minister Benjamin Netanyahu tried to belittle the conference, saying that the countries participating in Paris cannot force a solution — which must emerge through direct negotiations only. Gen. Dore Gold, director of the Foreign Affairs Ministry, summoned a hastily prepared press conference June 2, declaring that the initiative will fail ''similarly to the Sykes-Picot'' agreement — a secret agreement made during World War I between the British and French governments pertaining to the partition of the Ottoman Empire. According to Gold, that agreement “was at the apex of the era of colonialism in our area. Their effort failed as we see today in the deserts of Iraq and Syria.”

But now Jerusalem understands that it must cope with a process that has started rolling and won't be easily stopped. It must now position itself differently ahead of the practical part of the French initiative, which should begin before the end of June when the French will distribute the tasks to different working groups. The Quartet report on the obstacles ahead of a two-state solution and the main themes to be tackled should be published very soon and used as a main tool of work for the French initiative. Israel will not be able to keep ignoring such a broad international engagement.