How serious is the French proposal on Middle East peace?

It is still unclear whether the international community will support the French initiative to hold a July conference in an effort to restart progress toward a two-state solution. 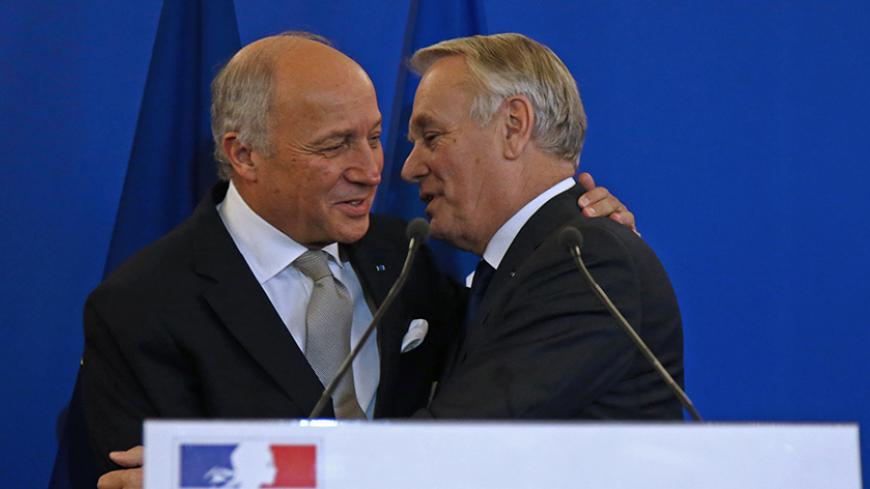 The ambitious French idea first suggested by Foreign Minister Laurent Fabius at the end of January of holding an international conference to kick-start the two-state solution process in Paris in July is alive and kicking. A senior Western diplomat in Jerusalem told Al-Monitor that the initiative to restart Israeli-Palestinian talks has been adopted by the new French Foreign Minister, Jean-Marc Ayrault.

The diplomat, who spoke on condition of anonymity, said that efforts in Paris, Tel Aviv and Ramallah as well as in other Arab capitals are in high gear to make the conference successful. Ayrault, who was chosen by President Francois Hollande on Feb. 11 to replace Fabius, moved quickly to assure all parties involved of the seriousness of the French effort.

The three-step approach — which France proposed at the end of January 2016 and includes consultations with Palestinians and Israelis, a spring preparatory meeting of the international working groups and a July conference in Paris — is definitely on track, the diplomat said.

A major stumbling block to the conference has been the possibility of Israel refusing to attend over the French desire to recognize a Palestinian state if the talks fail, according to the former minister. Speaking to an annual gathering of French diplomats Jan. 29 about what France would do if it faced a wall of Israeli rejection, Fabius said, “Well, … in this case, we need to face our responsibilities by recognizing the Palestinian state."

The senior Western diplomat noted that there is nothing to suggest that France's new foreign minister has backed away from that stance. “France’s goal right now seems to be bringing all parties to Paris and to reach that goal. The French want to be sure not to antagonize any party,” he said.

Given the ongoing efforts and demarches, however, the diplomat does not believe that the idea of the conference was to give “a fig leaf to a predetermined French plan to recognize Palestine.”

It is unclear how strongly the international community will support the French initiative. Washington appears to have washed its hands of the Palestinian conflict, although US Secretary of State John Kerry made a special effort to meet with Palestinian President Mahmoud Abbas on Feb. 21 during Kerry’s most recent visit to Amman. No details of that meeting have been made public and it is not clear whether the French conference idea was discussed.

On Jan. 31, Abbas expressed his support for the French initiative, while Hamas has rejected it Jan. 31, calling it “a waste of time.”

Camille Mansour, a board member of the Institute for Palestine Studies and former professor of international relations at the University of Paris, is skeptical. “I am not convinced that an international conference attempting to solve the Palestinian conflict can succeed while the US is busy in a presidential election campaign,” he told Al-Monitor by phone from Paris.

Mansour, a former adviser to the Palestinian negotiating team and a close observer of French politics, said that he did not notice much interest in France about the conference. “There are very few write-ups in the serious French newspapers, and this usually means that the initiative is not a serious one.”

While still skeptical, Mansour was intrigued by some discussions in Palestinian circles that France is doing the bidding of Washington and that the US administration is quietly supporting the French initiative, while both Paris and Washington might, in fact, recognize Palestine consecutively.

“There is an intriguing argument that talks about a last-minute recognition of Palestine by President [Barack] Obama in the period after a possible November victory of the Democrats and before stepping down in January, but I am not totally convinced that a [new] US president will have the courage to make that move and possibly hurt his own party,” Mansour said.

Regardless of the behind-the-scenes discussions, the United States and its European allies are celebrating the major success of the international effort that brought about the nuclear agreement with Iran and that appears to have moderated Iranian foreign policy, as reflected in the most recent Iranian elections on Feb. 26, when allies of Reformist President Hassan Rouhani were swept to victory.

Despite the obvious skepticism due to past failures, an international effort to replicate the Iranian agreement process and solve the intractable Israeli-Palestinian conflict might work if there is seriousness behind the French effort and if Washington is willing to spend political capital to make it work.