How Bibi was blindsided by French ultimatum on Palestinian state

Israel issued a jumbled response to the ultimatum by France to unilaterally recognize a Palestinian state, but it is a warning that should not be taken lightly. 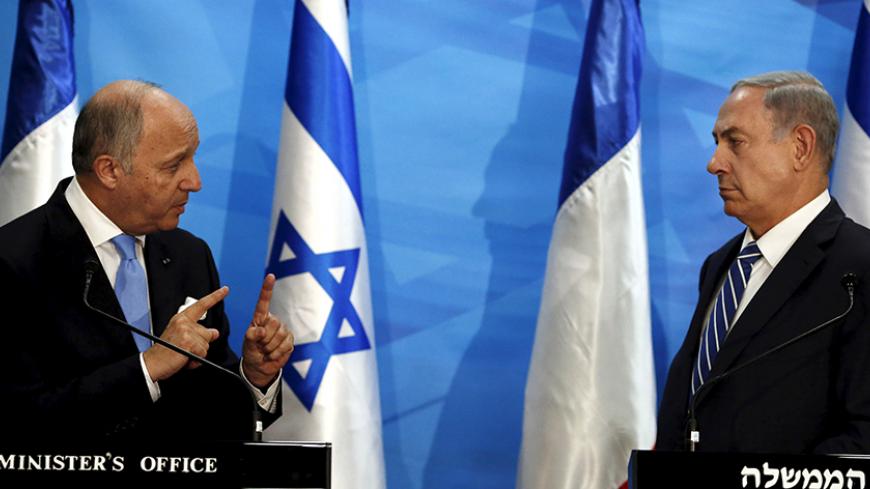 “The French initiative caught us unprepared. We didn’t expect them to surprise us like that,” admitted a member of Prime Minister Benjamin Netanyahu’s inner circle speaking on condition of anonymity in response to the diplomatic initiative announced by French Foreign Minister Laurent Fabius on Jan. 29. The initiative itself is quite problematic, at least as far as Israel is concerned.

Briefing French ambassadors a few weeks before leaving office, Fabius said that France will be taking steps over the next few weeks to convene an international conference with the participation of the United States, Europe and Arab states. The purpose would be to ensure that the two-state solution remains a viable and tenable option. As he put it, “Unfortunately, Israeli settlement construction continues. … We must not let the two-state solution unravel.”

This is not the first time that France has presented an initiative to advance a two-state solution in the past few years. What distinguishes this particular effort, however, is the ultimatum accompanying the proposal: If the conference fails, France will unilaterally recognize a Palestinian state. This means that the international pressure Israel has faced over the past few years, because of diplomatic stalemates stemming from Netanyahu governments, has risen to a whole new level.

France is a country friendly to Israel. It is also a permanent member of the UN Security Council, and in the nuclear negotiations with Iran, it took an even tougher stance than the Americans over the timing for lifting sanctions. The obstacles that the French put in the way were, among other things, a consequence of talks that Fabius had had with Netanyahu when the prime minister was still lobbying to block the agreement, which was ultimately reached last July.

When Fabius met with Netanyahu on June 21 during a visit to Israel, he expressed concern about the ongoing deadlock in the diplomatic process. At the time, Netanyahu told him that he was prepared to return to the negotiating table without preconditions and accused the Palestinians of incendiary rhetoric. It is quite possible that the prime minister believed that this would buy him more time, at least as far as France was concerned. Then Fabius popped up Jan. 29 with a new ultimatum, creating a whole new set of circumstances.

In response, Israeli diplomatic sources took aim at the French foreign minister, alleging that the conference Fabius is orchestrating and the ultimatum he put on the table are direct consequences of his desire to leave a mark in the history books, before he leaves office, and that the move itself makes no sense. Thus, in the end, it will vanish just as quickly as it appeared.

Even if these sources are correct, it should not be taken lightly that a country like France is issuing an explicit ultimatum over the Palestinian issue. France is not Sweden. It is a major European state, and its ultimatum culminating in unilateral support for a Palestinian state should be a warning sign for Israel.

Also, even if the reason behind the French ultimatum is Fabius' personal desire to go down in history, it still represents increased pressure on Israel by one of its closest friends. Unfortunately, as the train that is unilateral recognition of a Palestinian state barrels down the tracks, Netanyahu’s government continues to keep its blinders on, responding in a confused manner, without a systematic foreign policy approach.

Israel responded as follows to the surprise Fabius dropped on it: First came attacks on Fabius' motives from the inner circle of the prime minister, who also happens to be Israel's foreign minister. This was followed by reported sarcastic remarks by diplomatic sources. For example, “Will France be calling for an international conference with the Islamic State, too? It has, after all, been conducting terrorist attacks on French territory.” Another snide remark attributed to diplomatic sources in Jerusalem asserted, “Past experience teaches that this is just another one of many French initiatives that will never be implemented.”

Amid these jumbled responses, Zionist Camp and Knesset opposition leader Isaac Herzog was accused of coordinating the move with the French during a visit to Paris Jan. 22. At that time, he met with Fabius, as well as with President Francois Hollande. Of course, Herzog denies the charges.

Daniel Shek, a former Israeli ambassador to Paris who accompanied Herzog to meetings, said in an interview with the Israeli news site Walla that he left the meetings without any impression that the French were about to launch such an initiative. According to him, over the course of the talks, the French did say, however, that they were troubled by the absence of a diplomatic process between Israel and the Palestinians, and that consequently, they were considering a number of options. Nevertheless, he said, they did not sound like they were about to act immediately.

While Israel went on the defensive and took an aggressive stance against the initiative to relaunch negotiations, Palestinian President Mahmoud Abbas praised the French effort. In a speech in Addis Ababa Jan. 30, Abbas promised that the Palestinians would make contact with France and other countries to advance the initiative. By doing so, he managed to present himself, yet again, as the side interested in negotiations in contrast to Israel’s stubborn rejection.

In fact, Israel’s reaction to the ultimatum remained confused for some 48 hours. It took two whole days for Prime Minister and Foreign Minister Netanyahu to officially respond. As expected, he launched a bitter attack against the effort, using the photo op before the weekly Cabinet meeting Jan. 31 to say that the initiative actually offers the Palestinians incentive not to compromise. He added, “Our position is very clear: We are prepared to enter into direct negotiations without preconditions and without dictated conditions.”

Although Netanyahu’s response represented the death knell for the possibility of convening a regional conference, it will not be enough to stop even Israel’s closest friends from continuing in the general direction they have been going. Israel’s allies are losing patience with the diplomatic standstill of Netanyahu’s fourth government. They will not be satisfied by the prime minister’s platitudes about his desire for negotiations. While his previous two governments — which included parties from the center and the left — made attempts to restart negotiations, the current right-wing government isn’t even willing to give the impression that it is engaged in dialogue.

In this atmosphere, even if nothing comes of the French ultimatum, it is a step in a dangerous direction as far as Israel is concerned. It signals that even friendly states, like France, are no longer willing to simply keep waiting for Israel’s next move on the diplomatic front.