Egypt is contemplating its own initiative in order to restart Israeli-Palestinian negotiations on a two-state solution in coordination with the French Foreign Ministry’s initiative. 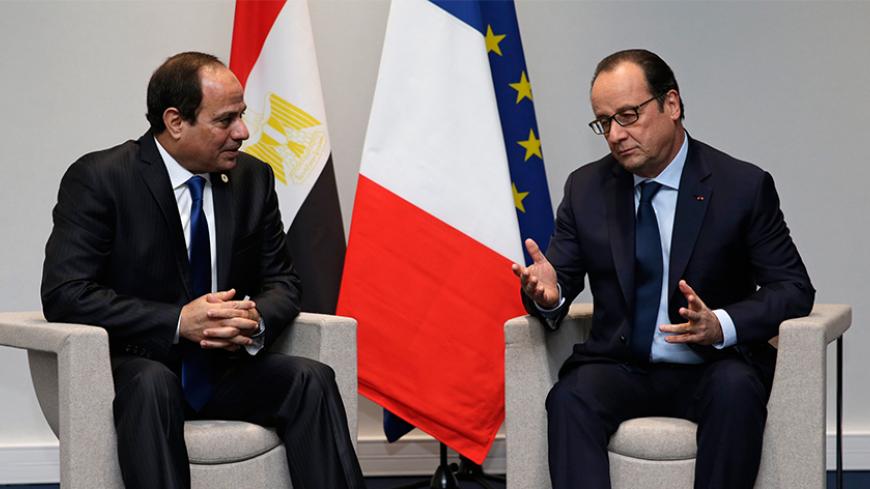 The pragmatic Arab countries are today mainly preoccupied with the rise in power and influence of Islamic fundamentalist movements, primarily the Islamic State (IS) and al-Qaeda. That focus has shifted the governments' attention away from the Palestinian issue. The only exception is Egypt and its leader, President Abdel Fattah al-Sisi.

In his Sept. 28 UN speech, Sisi said the establishment of a Palestinian state on the 1967 borders with Jerusalem as its capital “will effectively eliminate one of the most important factors contributing to the region's instability and one of the most dangerous pretexts used to justify extremism and terrorism.”

Sisi's position is in line with the traditional leading role of Egypt on the Palestinian cause. President Anwar Sadat made dealing with it a condition for the Egyptian-Israeli peace treaty in 1979. President Hosni Mubarak played a central role in backing PLO Chairman Yasser Arafat through the Oslo process and hosted most of the negotiations on the Interim Accords of 1995 on Egyptian territory (in Cairo and Taba). Today, Sisi is also preoccupied with Hamas becoming stronger at the expense of Fatah; this has to do with his anti-terror policy.

The official said the Egyptian president would decide if and when to make a public policy statement in that vein, depending on the situation on the ground. Egypt is extremely concerned about the possibility of an armed intifada that ultimately would strengthen the hand of Hamas.

According to the Egyptian official, Egyptian diplomats have been exploring the initiative with PA President Mahmoud Abbas, Israeli security officials, officials in the US National Security Council and, primarily, the French Foreign Ministry.

The main hurdle to such an initiative, the Egyptian official noted, is Israeli Prime Minister Benjamin Netanyahu’s settlement policies and the nature of his current coalition. Yet as broader strategic regional interests are at stake, Egypt would continue to explore the value of such an initiative.

It seems the international community is coming to the conclusion that the Palestinian issue must be dealt with, despite current Israeli and Palestinian policies, parallel with the fight against IS. While the US administration has taken a back seat on the issue, the French have decided to take the lead in attempting to break the deadlock. Like most EU countries, France is concerned with the fate of the PA due to the lack of a diplomatic horizon.

A senior French Foreign Ministry official told Al-Monitor on condition of anonymity that President Francois Hollande and Foreign Minister Laurent Fabius have decided to launch their initiative to convene an international conference on a two-state solution mostly out of concern for the political survival of Abbas. In the official's view, without a viable and credible peace process backed by the international community, there is a real danger of the PA's collapse and the outbreak of an armed intifada. France is coordinating the initiative with Egypt and the PA and has also notified in advance the Netanyahu government, US Secretary of State John Kerry and France's European partners.

The Paris official claims no one in the French government is optimistic about their initiative succeeding in full, primarily because of the Israeli settlement policy. Yet the decision to launch the effort was made because international efforts are crucial in the case of Abbas and for the hope of avoiding greater violence. Furthermore, the French interest is, at the very least, to establish this year a platform for future negotiations on a two-state solution on the basis of the 1967 lines. France’s skepticism about Netanyahu’s response to an international conference was the reason Fabius announced that, should the effort fail, France would recognize Palestine as a state. That, in the French view, would lead other EU governments to do the same.

The Egyptian and French policy positions are very timely and not merely for the sake of strengthening Abbas. A two-state solution process is a must in any stabilization and anti-fundamentalist strategy in the Middle East. This is not only part of the Palestinian interest in reaching statehood, but also an Israeli basic interest of preserving the state's Jewish and democratic identity. As for the United States, this process should become part of its anti-fundamentalist extremism strategy.