EU to push forward with two-state conference, with or without Washington

EU senior officials are planning a two-state conference to be held before the end of the year, with both a bilateral and a multilateral track. 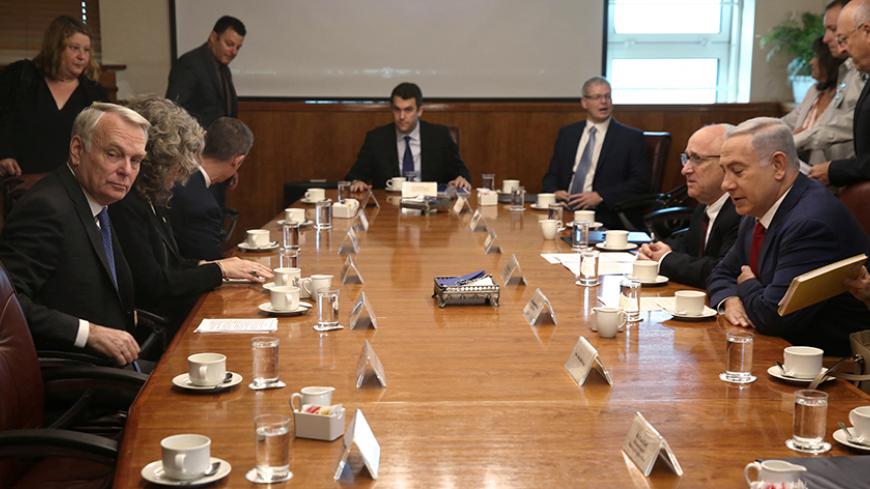 European capitals are busy with the organization of an international conference on the two-state solution, which would elaborate on the French Middle East Peace Initiative. Israel and the Palestinians were not invited to the preparative conference in Paris June 3. European leaders, including more Israel-leaning countries, such as Germany and the United Kingdom, agree that the next phase would include both. According to a senior European Union official who spoke to Al-Monitor on condition of anonymity, all EU foreign ministers decided to support the French initiative in order to challenge the parties and bolster the position of Palestinian President Mahmoud Abbas.

EU officials believe that not much can come out of such a conference without the United States playing an active role. Therefore, if the United States remains passive, the conference can be only of preliminary nature, to set a policy platform for future negotiations. And so if the conference eventually takes place before a new US president is sworn in (with a lame-duck administration in Washington) — with the United States effectively playing a passive role — Brussels will probably take the lead, to avoid a diplomatic vacuum.

The EU official told Al-Monitor, “Europe has decided to play a more independent role regarding the two-state solution process, especially given the transition in Washington and the uncertainty about the next president. Israeli-Palestinian conflict resolution is a key strategic interest of most European countries, as it affects the fight against fundamentalist terror and the security of the Mediterranean. Hence we would like to formulate the terms of reference and the structure for future negotiations.”

According to the source, EU headquarters' officials — under the guidance of High Representative for Foreign Affairs and Security Policy Federica Mogherini — are coordinating content and moderation of such a conference mainly vis-a-vis French Foreign Minister Jean-Marc Ayrault. UN Secretary General Ban Ki-moon is fully in the know.

The conference is planned to take place in Paris toward the end of the year, possibly after the US presidential election Nov. 8. The Quartet (United States, EU, United Nations and Russia) would be the one inviting the parties to the international peace conference, which would be based on the Quartet report published July 1. All participants of the Paris conference of June 3 will be invited, including the Arab League, in addition to Israel and the Palestinian Authority (PA). The terms of reference of the conference will be the Quartet report. The parties will not be asked to adopt the report, but to negotiate on its basis.

The structure of the conference is already taking shape: Quartet representatives at the level of foreign ministers and the UN secretary-general will chair it; the opening plenary session will include speeches by all parties. It will also delineate a structure of negotiations, according to the following guidelines: a plenary session for reporting about and monitoring the negotiations; a bilateral committee of Israel and the PA only, to negotiate on the basis of the Quartet report all permanent status issues; and a multilateral track with Israel, the PA, the Arab League, Egypt, Jordan and Quartet representatives.

Concerning the bilateral Israel-Palestinian committee, it will work on core issues, starting with borders between the two states and security measures, including anti-terror cooperation. The two parties will establish subcommittees of negotiations on the following issues: settlements, Jerusalem, refugees, water and other infrastructure issues, future bilateral relations between the two states and mutual recognition.

With these issues to be discussed bilaterally, the multilateral track will negotiate the normalization of relations between the Arab states and Israel based on the 2002 Arab Peace Initiative; the construction of economic regional cooperation in the fields of tourism, trade, the environment and water (resembling the multilateral negotiations started by the Madrid conference of 1992; and the launch of regional security cooperation, mainly in the fields of anti-terror and curbing the dissemination of nonconventional arms.

The EU seems determined to go ahead with such plans, despite US hesitance and Israeli opposition. Given the alternative of a policy vacuum in the region — which will most probably lead to a violent outburst between the Palestinians and Israel and to greater difficulties in assembling an Arab-West coalition against the Islamic State — it would be important for the United States and Israel to reconsider their positions on such a conference.

US President Barack Obama would not want to leave behind him a region plagued by an armed intifada.

As for Israel, even the right-wing Netanyahu government must comprehend that a viable peace process based on a global consensus is in Israel’s interest. It can always express its different position within the negotiations' framework. Israel’s identity, security, morality and position in the world stand only to gain from an internationally monitored two-state solution process.