Germany is deeply engaged in efforts to end the Israeli-Palestinian conflict, and its diplomats say that the Paris conference should be based on the Quartet report. 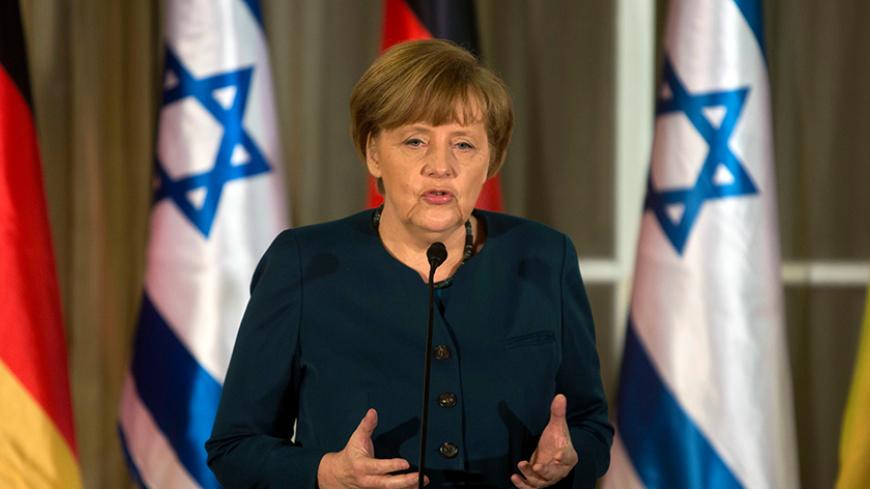 Intense deliberations are taking place between the members of the Quartet (United States, United Nations, European Union and Russia) to finalize a report on the obstacles to a two-state solution and the terms of reference for future negotiations involving Israel and the Palestinian Authority (PA).

There is broad agreement among Quartet representatives on the necessity of sharply denouncing the settlement expansion policy of the Benjamin Netanyahu government and the incitement to violence by official organs of the PA. There is, at the moment, less of a consensus on the two-state solution policy platform that is being prepared by the Quartet. The US administration is the key for reaching such a consensus.

For now, according to a US diplomat in Tel Aviv who spoke to Al-Monitor on condition of anonymity, there is broad agreement on three main points. First, Quartet members share the position that borders must be based on the 1967 lines with mutually agreed land swaps. Also, they all agree that the Arab Peace Initiative of 2002 should be mentioned in the policy platform as a basis for the two-state solution. This would anchor the principles and goals of an agreed-upon and just solution to the Palestinian refugee problem as well as normalization of relations between the Arab states and Israel. The third agreed-upon point is the need to emphasize in the report stringent security measures along the new borders and regional anti-terror cooperation.

There is still disagreement on the issues of East Jerusalem, on the definition of Israel as the homeland of the Jewish people and on the timeline for negotiations.

These efforts resemble the beginnings of the collective diplomacy efforts on Syria and Iran by the P5+1 (United States, Russia, China, Britain, France and Germany). Apparently, the Obama administration has yet to make up its mind if the Obama legacy on a two-state solution will include the Quartet. A Quartet-consensual move would offer the next US president not only a policy platform, but also a possible negotiation mechanism for the two-state solution.

Federica Mogherini, the influential EU High Representative for Foreign Affairs and Security Policy, is very much involved in these deliberations, having committed herself, according to her associates, to help bring about a two-state solution by the end of her term in 2019. She is coordinating with the foreign ministers of several EU member states, primarily with France, the United Kingdom and Germany. It is worth noting that Germany was part of the P5+1 but is not part of the Quartet. Even so, its voice on Middle Eastern issues — as was the case of Iran — is very much respected, both in Europe and the United States.

A senior German official dealing with Middle Eastern issues in the chancellor’s office in Berlin told Al-Monitor on condition of anonymity that Chancellor Angela Merkel is following very closely the deliberations of the Quartet and the preparations for the Paris conference. The official did not outright deny the April 29 report of Der Spiegel that the chancellor is highly frustrated with Netanyahu’s settlement policies and is contemplating not objecting to a UN Security Council resolution on a two-state solution. According to the source, Germany is preoccupied with the Israeli-Palestinian diplomatic stalemate, with its impact on the situation in Syria, namely Palestinian violence that could inspire Islamic State/Hezbollah violence, and the ripple effect on the refugee crisis in Germany itself.

The official believes that the Paris conference, which has been delayed until the summer, should be based on the Quartet report. The parties, he argued, should not be asked to adopt the report as is, but to adopt it as the basis for negotiations. He explained that in order to create an environment conducive to constructive negotiation, Germany is in favor of a freeze on settlement expansion, an enhancement of anti-terror cooperation between Israel and the PA, and an end to all anti-Israel incitement by the Palestinians. If negotiations are indeed seriously launched, then multilateral decisions, such as a Security Council resolution proposal for Palestinian statehood, will have to await their conclusions. But if Israel refuses to negotiate on the basis of the Quartet report, the next diplomatic move should be at the Security Council.

The framework of future negotiations should be, in the view of the senior German official, the Quartet. The Quartet members should closely monitor the negotiations and play a mediating role. Germany will not insist on participating, but will monitor the process, coordinate policy positions with the EU, United States and Russia, and continue its important security assistance to Israel and its economic assistance to Palestine.

In terms of the content of the Quartet report, the German diplomat said that the parameters for a two-state solution are quite clear and were well expressed in Secretary of State John Kerry’s policy framework proposals of April 2014. He concluded that German diplomacy will be guided by these principles; namely, an end to Israeli occupation and the establishment of a Palestinian state, Israel security as a paramount German interest and regional normalization of relations based on the Arab Peace Initiative and regional anti-terror cooperation.