Given US President-elect Donald Trump's past declarations regarding the two-state solution, the European Union is now exploring a more independent regional policy as a basis for international consensus. 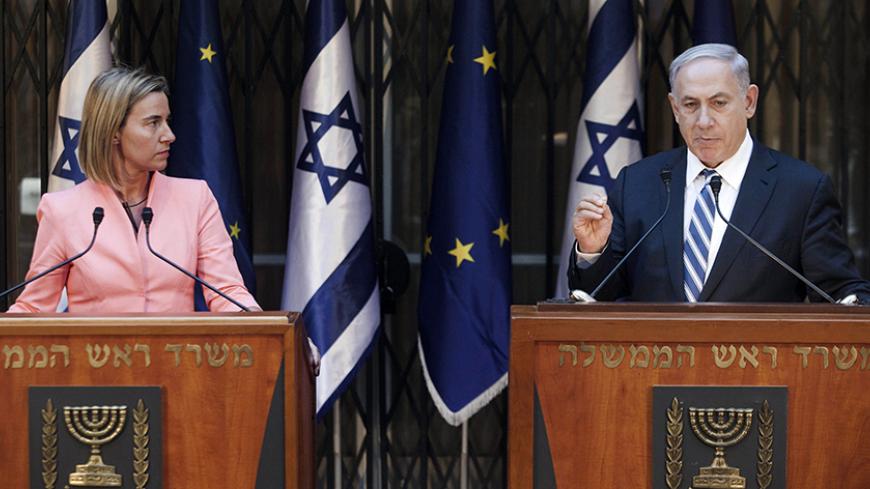 Given the serious questions concerning US President-elect Donald Trump’s future policies on the Israeli-Palestinian issue, the European Union is now exploring a more independent regional policy as a basis for international consensus.

European capitals were taken by surprise, if not shock, by the election of Trump as the next president of the United States. German Chancellor Angela Merkel gave her qualified blessing to the president-elect, saying, “Germany and America are bound by common values — democracy, freedom, as well as respect for the rule of law and the dignity of each and every person, regardless of their origin, skin color, creed, gender, sexual orientation or political views. It is based on these values that I wish to offer close cooperation, both with me personally and between our countries’ governments.”

The European states, as expressed by many of their leaders in the past months, are concerned about Trump’s lack of experience in foreign and security matters, by his pro-Russian stance and his various expressions against the EU, NATO and free trade deals. He is viewed in most EU capitals as an American nationalist and isolationist who intends to bolster the US military.

A senior official close to Federica Mogherini, the EU’s high representative for foreign affairs and security policy, told Al-Monitor on condition of anonymity that Brussels is concerned about the intentions of the Trump administration. Yet he said, “We intend to fully cooperate with the Trump administration on all burning issues on the international agenda: the Iran deal, Ukraine, Syria, Iraq, Turkey, the Israeli-Palestinian conflict, etc. The degree of cooperation depends on the new American president and his secretary of state.”

The official told Al-Monitor that policy planners in Brussels have been asked to contemplate various policy options in case the United States opts for a more isolationist policy. “This would be a negative development for the Atlantic relationship — and even for NATO coordination — and would forcefully lead the EU to a more independent foreign policy.”

According to the official, the next months until the inauguration and shortly after it would be spent on convincing President-elect Trump and his foreign policy team to adopt close relationships and coordination with EU member states. This will include meetings between the heads of EU member states and Trump himself, starting with a meeting with British Prime Minister Theresa May.

The assessment in Brussels is that the issue that demands the most independent EU position is the Israeli-Palestinian conflict resolution, given Trump’s evident desire to disengage from a two-state solution process.

Therefore, EU policy planners have been requested to focus on developing independent EU policy engagements on a two-state solution. Such engagements will express EU goals in this context.

An essential goal would be, for instance, preventing the outbreak of greater violence and an armed intifada given Palestine’s growing frustration on the lack of advancement for Palestinian statehood. Another evident goal would be curbing Israeli settlement expansion, which would make the current status quo irreversible. Also, the EU wants to strengthen the pragmatic Mahmoud Abbas regime, currently weakened by growing criticism of the political stalemate, even within the Fatah movement. And a last, comprehensive goal would be the renewal of a two-state solution process with the engagement of pragmatic Arab countries, primarily Egypt, Jordan and Saudi Arabia.

With these goals in mind, EU officials are working on four main concrete measures.

For the first measure, Brussels would like to implement the July 2016 Quartet (EU, United States, United Nations and Russia) report’s recommendation on the settlements, demanding an Israeli settlement freeze, as well as an end to Palestinian official incitement to violence.

A second measure would be the emphasis on coordinating a UN Security Council resolution declaring all Israeli settlements east of the Green Line as illegal and demanding an immediate freeze of settlement construction. France, Egypt, Jordan and the Palestinian Authority (PA) should spearhead these efforts.

The third measure includes convening at the beginning of 2017 a second Paris peace conference based on the concluding statement of the previous Paris conference that was held in June with an emphasis on the Arab Peace Initiative of 2002 as the basis for a two-state solution.

The fourth measure is drafting EU terms of reference on the permanent status issues. Such a document could serve as the basis for future negotiations. Naturally, any EU terms of reference would have to be developed and explored in the framework of the Quartet. But the EU has some ideas on what this should include:

For these measures to be implemented, the EU would need to leverage its economic clout in the region. And so, the EU will propose that, within a two-state solution, both Israel and Palestine will be offered the highest nonmember status, namely membership in the European Economic Area.

The EU will also use its economic clout to encourage the parties to advance toward a two-state solution, both by economic and scientific incentives and, possibly, by punitive measures.

The EU official told Al-Monitor that the main emphasis of EU policies on the issue, given the change in Washington, will be a more forceful attempt to curb Israeli settlement expansion. Brussels is very concerned that with the apparent nature of the next US administration, Israel will sense that it has a green light to expand settlement construction, especially in the Jerusalem area and in the Jordan Valley. The EU will attempt to prevent this through economic measures against Israeli companies active east of the Green Line and by labeling Israeli products manufactured in West Bank settlements.