Israelis and Palestinians are now redrawing the lines for a new diplomatic battle in the aftermath of Donald Trump’s election. 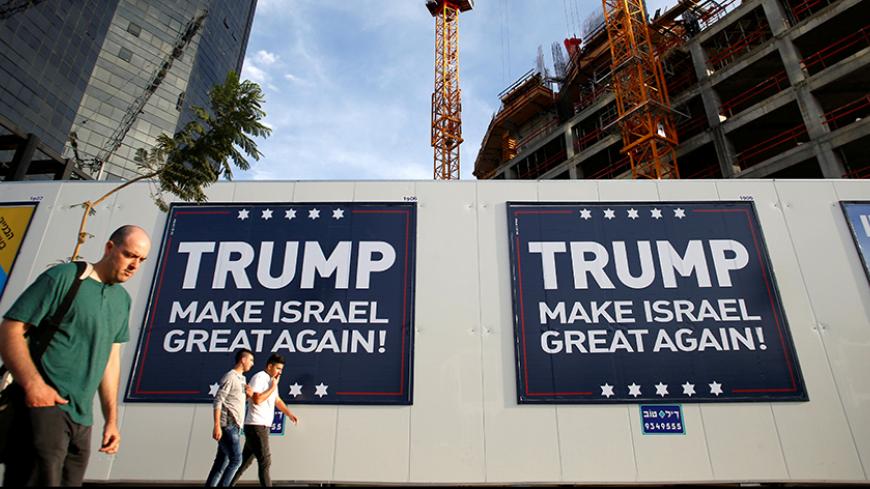 Shock and dismay prevailed among the leadership of the Palestinian Authority (PA) following Donald Trump’s election. During the US election campaign, most of the Palestinian official spokespeople claimed that Hillary Clinton and Donald Trump were equally bad news for Palestinian interests. Yet beyond these claims there was a clear preference for Secretary Clinton, out of belief that she could engage with the international community on a two-state solution process. Trump’s election victory shuttered any hope of such prospects.

A senior PLO official told Al-Monitor on condition of anonymity that Trump’s victory is a historic turning point for the Palestinian leadership. He said, “Donald Trump and his entourage have expressed views that endorse [Prime Minister] Benjamin Netanyahu and [Education Minister] Naftali Bennett’s annexation ideology. The only state a President Trump would be willing to approve would be a binational one. We will not engage in a diplomatic process with the Trump administration unless it recognizes Palestinian statehood on the 1967 lines.”

The senior official told Al-Monitor that the leadership is convening on an ongoing basis to explore a Palestinian national strategy adapted to this new situation. The premises for developing this strategy are numerous. The Palestinians believe that the United States under Trump will not lead a realistic international effort on a two-state solution. It may instead give a tacit green light to Israel to continue much of its settlement policies and the de facto annexation of Area C. The source explained that they foresee Russia becoming a more relevant player in the region, given the prospects of a good Trump-Vladimir Putin relationship. Also, with Brussels, Paris and Berlin increasingly concerned about a tacit agreement by Washington for Netanyahu to continue his settlement expansion policy, the role of the European Union in that respect may be enhanced. The source noted that initial positive rapport between Egyptian President Abdel Fattah al-Sisi and Trump could signal a significant role for Sisi on the Palestinian issue.

The senior Palestinian official believes that, in this situation, the Palestinian political equation may tilt more in favor of hard-line Hamas and that West Bank public opinion will grow more desperate and angry. A violent uprising cannot be ruled out in such a situation.

And so the Palestinian leadership will focus its statehood battle in three arenas: the Arab League, the UN Security Council and on the ground (vis-a-vis Israeli annexation policies).

Concerning the Arab League, the Palestinian leadership will, in coordination with Egypt, propose an all-Arab alliance (diplomatic and otherwise) for making the year 2017 the year that ends 50 years of occupation. Egypt will relay this message of Arab unity to the international community, including the new Trump administration. In Palestinian eyes, Egypt will again play its traditional role as the main backer of the Palestinian cause on the international scene, especially after the change of administration in Washington.

Egypt, most probably together with France, will advance a Security Council resolution defining all Israeli settlements east of the Green Line as illegal and demanding that Israel freeze all settlement building. In parallel, there will be a call to the parties to renew permanent status negotiations on the basis of the 1967 lines with East Jerusalem as the Palestinian capital. The Palestinians are sure that the Americans will veto such a proposal, but they also feel that such a resolution proposal could isolate the United States and Israel in the international arena.

On the ground, the PA will closely monitor all Israeli settlement construction, economic annexation measures and human rights violations in order to report them to the International Court of Justice in The Hague. In parallel, Palestinian security forces stand ready in case a popular uprising (intifada) erupts.

In general, the new strategy, as described to Al-Monitor by the senior PLO official, is to isolate Israel and the United States in the international community and to allow greater civil (nonviolent) protest in the West Bank during this 50th year of the occupation.

A senior Israeli Foreign Ministry official told Al-Monitor that this time the ministry is taking the Palestinian warning of an intifada more seriously than before. Their assessment is that growing Palestinian frustration is currently directed against President Mahmoud Abbas, and that a possible intifada in 2017 will be directed more against the Palestinian leadership than against Israel.

Israel, said the source, will counter the Palestinian diplomatic offensive by closely coordinating its moves vis-a-vis the Palestinian issue with the new Trump administration before and during the planned meeting between Netanyahu and Trump. Much as the Palestinians believe, the Netanyahu government is hoping to get a US green light for settlement expansion according to the natural growth of the population there and mainly within the settlement blocs. In opposition to the Palestinian diplomatic offensive, Israel will ask for a US commitment to veto any anti-Israel resolution at the Security Council and for the United States to block any Quartet (EU, United Nations, United States and Russia) initiative determining permanent status frameworks.

And so, both on the Palestinian and the Israeli sides, the lines have been redrawn for a new diplomatic battle in the aftermath of a Trump election.