Will Israel move from occupation to annexation? 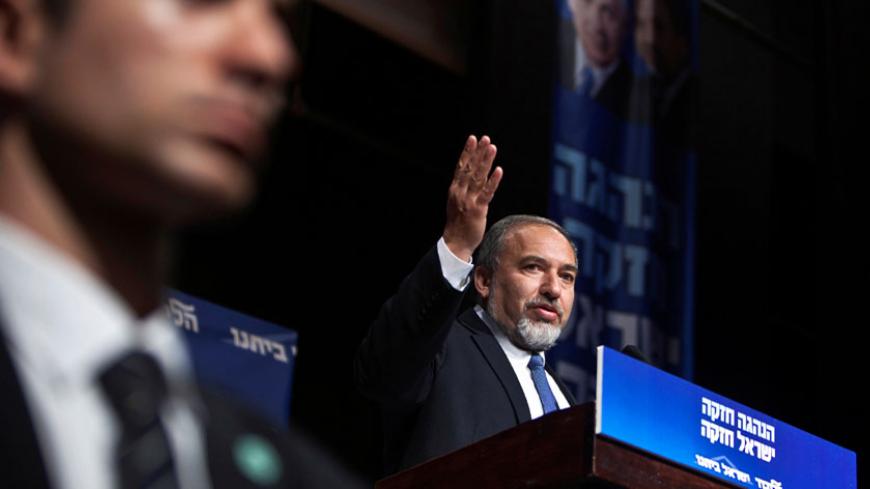 Israeli Prime Minister Benjamin Netanyahu’s surprising turn in appointing Avigdor Liberman, head of the right-wing Yisrael Beitenu party, as defense minister May 25 caught the international community off-guard. In the days before the appointment, intense deliberations took place about the upcoming Quartet report on obstacles in the way of a two-state solution and the Paris conference to relaunch a two-state process. The deliberations were based on the assumption that Netanyahu was on his way to enlarging his government with the moderate center-left Zionist Camp and Isaac Herzog as foreign minister in charge of peace negotiations.

A senior official at EU headquarters dealing with the Middle East peace process told Al-Monitor on condition of anonymity that there was a new, although brief, sense of optimism in European capitals that Netanyahu would, at the very least, engage in the beginning of a two-state solution process and restrain settlement expansion.

These intense international deliberations included exchanges over US Secretary of State John Kerry’s participation at the Paris conference, which has now been rescheduled for June 3.

The United States and France convinced Egyptian President Abdel Fattah al-Sisi to issue a statement May 17 calling on Israel and Palestine to engage in a two-state solution and regional peace process that would also lead to regional cooperation. The Palestinian leadership was encouraged by the French diplomatic move and the Egyptian position. The light at the end of the tunnel seemed to reappear.

The horizon darkened again when instead of Herzog’s appointment as foreign minister, Liberman was appointed defense minister.

Expressing European disappointment over the appointment, the EU official analyzed for Al-Monitor its ramifications in the eyes of Brussels. The way Europe sees it, Netanyahu has made a final decision to avoid at all costs a two-state solution. Liberman is an extreme hawk; he is greatly hostile to Palestinian President Mahmoud Abbas and has expressed interest to wipe out Hamas. Hence, the move is likely to weaken the pragmatic Palestinian leadership in Ramallah. EU leaders fear that an armed intifada is now more likely. Instead of a settlement freeze, a settlement expansion is probable as well as an Israeli strong fist policy vis-a-vis the Palestinians of the West Bank. Occupation will only deepen. Israel’s relations with Egypt, Jordan and Turkey could also suffer severely.

The source further argued that while outgoing Defense Minister Moshe Ya’alon was not considered in the EU to be a force advocating a peace process, his contribution to Israel’s democratic fiber was well-recognized — in particular, his support of the ethical stance demonstrated by Israel Defense Forces Chief of Staff Gadi Eizenkot and his deputy Yair Golan over the past few weeks. Liberman, known for his racist rhetoric and legislative attempts, would further cast doubt over Israel’s flawed democracy.

The EU official sounded extremely alarmed, yet determined to proceed with the preparation for the Quartet report and the Paris conference.

The Palestinian Authority (PA) is even more alarmed at the Liberman appointment and the Ya’alon resignation. A senior PLO official close to Abbas told Al-Monitor on condition of anonymity that Ramallah had warned the international community not to expect anything from Netanyahu: “From government to government, Israel moves more and more to the right. With Netanyahu, Liberman and [HaBayit HaYehudi chair Naftali] Bennett, we expect this to be an annexation government — be it settlement expansion in the Jerusalem and Ramallah areas and the Jordan Valley or land expropriations and economic activity in Area C.”

According to the official, the PA notified Egypt, the European Union and the United States that, without international activity to stop Israel’s annexation policies and guarantee Palestinian statehood, it will have to take measures to solidify its position within its people. These measures would include halting the security cooperation with Israel (with the exception of the passages on the Jordan River), asking Egypt and the Arab League for a UN Security Council resolution on Palestinian statehood on the 1967 lines with East Jerusalem as the capital, halting all civilian and economic cooperation with Israel, and enhancing unity and cooperation between Fatah and Hamas.

The official expressed skepticism about the possible outcomes of the Paris conference and believes that the diplomatic arena has to move to the Security Council.

The international community should be aware of this Palestinian desperation. In the eyes of the PA, the Liberman appointment is not “more of the same,” but a policy leap toward annexation policies.

The US administration should be attentive to these Palestinian alarm bells when it comes to deciding its policy positions relating to President Barack Obama’s Middle East policy legacy.