Israel's recent expropriation of West Bank land has greatly angered European leaders, putting them on a possible collision course with Washington at a time when they are coordinating coalition building against extremist Islamists in the region. 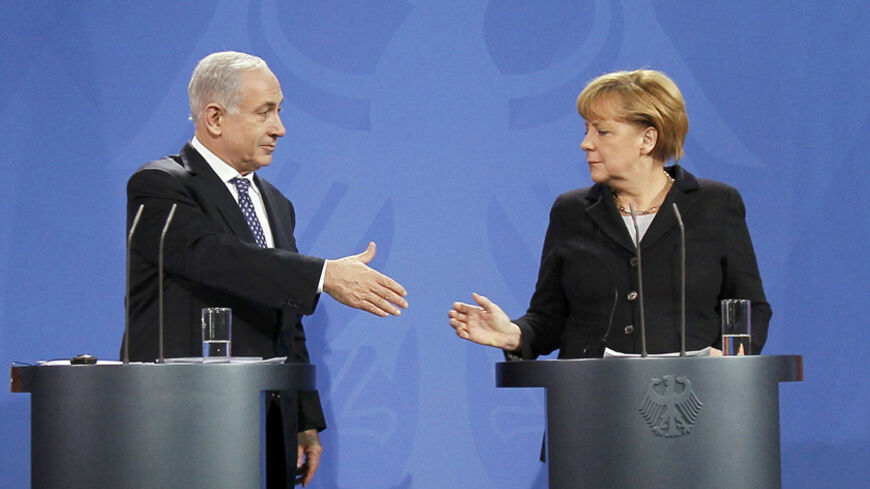 Israel has stabbed Palestinian President Mahmoud Abbas in the back, say sources in the Italian Foreign Ministry close to Foreign Minister Federica Mogherini, the European Union's next high representative for foreign affairs and security policy. They spoke of an unprecedented clash between Europe and Israel in the aftermath of the recent Gaza war. While Mogherini will attempt to present an impression of balance on the Israeli-Palestinian conflict, the mood in Rome, as in Brussels, is one of great anger toward Prime Minister Benjamin Netanyahu's government.

The European leadership was dismayed at the Israeli government’s Aug. 31 decision to expropriate some 1,000 acres of West Bank land between Jerusalem and the Etzion settlement bloc. The move is seen as a blow of strategic proportions to the prospects for a two-state solution, a quasi-annexation making the contiguity of a Palestinian state in the Jerusalem area impossible.

There is growing mistrust, to say the least, of Netanyahu in Berlin, Paris and London as well as Rome. The leading European states gave Israel backing for the operation in Gaza, for reasons of self-defense and to strengthen Abbas at the expense of Hamas. Israel’s move on settlement expansion immediately after the war is seen as harming European interests in the region. As a Brussels official told Al-Monitor, “Netanyahu is spitting in our faces.”

More gravely, the EU leadership views the land expropriation as a blatant policy transformation by Israel away from a realistic two-state solution and therefore stands to weaken the moderates, a genuine gift to Hamas. Friends of Israel in Berlin expressed to Al-Monitor how concerned German Chancellor Angela Merkel has become, and indicated that she has conveyed her position to Washington.

This development comes at a time when the United States and the EU are coordinating policies on combating radical Islamists. An important part of their strategy is to strengthen the coalition of pragmatists in the Arab world, including Egypt, Saudi Arabia, Palestine and Jordan. Abbas has an important role to play in this axis, because of the pro-Palestinian mood in the Arab streets.

Abbas is indeed disillusioned. He never had high hopes for Netanyahu, but even he was surprised by the scope of Israel's decision. The condemnations from Washington and Europe were of no consolation to him. According to officials in Abbas' inner circle, he has come to the conclusion that he is isolated and must now act unilaterally, which is the reason for the new Palestinian policy initiative that insists on a deadline for ending the occupation.

Abbas appears to his colleagues to be more forceful and more determined than ever to demand and achieve real progress toward statehood. Sept. 13 marked 21 years since Abbas signed the Oslo Accord at the White House, together with then-Foreign Minister Shimon Peres. The agreement established a deadline for the permanent status — five years after the agreement on Gaza and Jericho, that is, May 1999. They are running 15 years behind schedule, and Abbas does not want to “wait for Godot” forever.

Ramallah has already launched a full-fledged diplomatic campaign. Abbas has recently been coordinating it with Egyptian President Abdel Fattah al-Sisi and Arab League Secretary-General Nabil al-Arabi. Without a clear timeline for statehood, Abbas is threatening to not only join all United Nations special agencies, as well as the International Criminal Court, but also to dismantle the Palestinian Authority. In the words of an Abbas associate, “If the Israelis want the occupation, let them carry the full burden. The time of a deluxe occupation is over.”

The immediate goal of the Palestinian campaign is to isolate Israel and the United States from the rest of the international community. The case, as discussed between Abbas and many European capitals, is that Abbas has shown flexibility in favor of a two-state solution. He agreed to mutual land swaps, to international supervision of Palestinian demilitarization and to flexibility on the all-important right of return. In exchange, he did not see a single Israeli map on future borders, only more maps for settlement construction.

Abbas' threats are not new, but the United States and the EU are now taking them more seriously. There has been much communication on the issue between Washington, Brussels, London, Paris and the Netanyahu government. It is a tense dialogue of mutual distrust. Netanyahu, according to senior State Department officials, has implied to US Secretary of State John Kerry that he does not welcome a discussion on the renewal of the peace process at this time.

The European leadership has told Netanyahu’s people that they will find it difficult to stop the spread of the boycott of goods produced in the settlements or a slowdown of cooperation with Israeli banks and companies located beyond the Green Line.

At this moment of coalition building, the last thing the Barack Obama administration needs is to veto a UN Security Council resolution on the Palestinian issue in opposition to Washington's coalition partners. To prevent a greater international clash with Israel, senior State Department officials are looking into ways to renew Middle East peace talks at the beginning of 2015 on the basis of the previous formula — the release of prisoners and a partial settlement freeze. Yet, even with that minimalistic peace scenario, they do not see Netanyahu willing to be rescued.