Will Palestinians declare independence in June 2017?

After 50 years of occupation, Palestinians intend to declare the establishment of an independent state in June 2017. 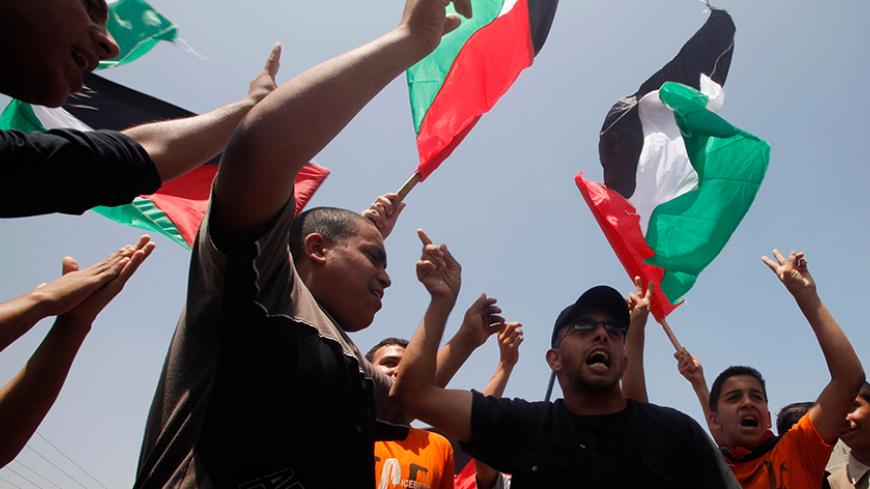 Palestinian protesters shout slogans during a protest marking the 44th anniversary of the 1967 war in which Israel captured East Jerusalem, the Gaza Strip, the West Bank and Golan Heights, near the Erez border crossing between the Gaza Strip and Israel, June 5, 2011. - REUTERS/Suhaib Salem

June 5, 2017, will mark 50 years since the Six Day War in which Israel conquered the West Bank and the Gaza Strip as well as the Sinai Peninsula and the Golan Heights. Israel considered it a war of defense, given repeated threats by Egyptian leadership at the time (then-President Gamal Abdel Nasser) to annihilate the country with the support of all Arab states. The Arab armies were defeated in six days. But what started as a rescue war, as a blessing for Israel, turned with time into a burden and a curse of controlling the lives of 2-3 million Palestinians. For the Palestinians, this date marks a second tragedy, after the very establishment of Israel in 1948.

Half a century of occupation saw the rise of a Palestinian national movement (PLO), a violent struggle and also peace efforts — all to no avail. Fifty years later, the West Bank is still under Israeli occupation, with a weak Palestinian Authority (PA) in charge of mostly civilian areas.

A bitter debate is currently raging within the leadership of the PA as to how to achieve the creation of an independent Palestinian state, thus ending Israeli occupation. The diplomatic route, which did provide hope during the Oslo process, seems to have reached a dead end. Palestinian President Mahmoud Abbas is still committed to a diplomatic solution by involving the international community and preventing violence, also via the security cooperation with Israel. But it appears that Abbas is more isolated now than ever before within the Palestinian leadership. Many other Palestinian leaders, even amid the Fatah movement, are inclined toward an armed intifada. Nevertheless, Abbas is (still) hinging his hopes on the Quartet (United States, European Union, United Nations and Russia) and on French initiatives for a negotiated two-state solution on the basis of the 1967 lines with the backing of the international community.

In the Ramallah government offices, one can detect today a sense of despair. Practically no one within the leadership really believes that, especially during an American election year, there will be any movement toward Palestinian statehood. A senior PLO official close to Abbas told Al-Monitor on condition of anonymity that time is running out. Alluding to the 50th anniversary of the Six Day War, he said that all PLO leaders are unanimous about this date constituting the absolute deadline for independence. And so, in informal deliberations on the subject, it was agreed that if no concrete and substantial progress is made soon toward ending Israeli occupation, the PLO leadership will declare on June 6, 2017, the establishment of an independent Palestinian state on the 1967 lines with East Jerusalem as its capital and will ask for UN recognition. The official said that the leadership will work until then to secure a UN majority, including at the Security Council, for such a scenario. Be that as it may, many PLO seniors are committed to declare statehood even without UN Security Council acceptance, and thereafter, they are ready to engage in an “intifada of independence.”

The current Palestinian despair is unprecedented and is a function of the unchallenged Israeli settlement expansion. Palestinians believe that with every day that goes by, reaching statehood becomes a greater challenge, given the ongoing increase in the number of Israelis living east of the Green Line. In addition, they are gravely disappointed with the Arab world. Palestinians feel that Arab regimes, motivated by self-preservation and a sense of survival, are focused on the fight against fundamentalism, without much attention to the Palestinian cause. The international community also seems to be letting the Palestinians down because of the focus on Syria, Iran and the immigration crises. They have no hope that US President Barack Obama, in his last year in office, will act in any concrete way, and they consider with great criticism and apprehension the American election campaigns. According to the senior official, Ramallah barely sees a difference between the Republicans and the Democrats. Donald Trump and the other candidates on the right seem as hostile to their cause as Israeli Prime Minister Benjamin Netanyahu. Hillary Clinton is viewed by the Palestinian leadership as someone who will endorse most of Israel’s positions while giving lip service to a two-state solution.

The Palestinians, who have always based their struggle and efforts on Arab and international support, feel extremely isolated. It is within this context that they have apparently decided to move on their own toward a unilateral declaration of statehood in June 2017 and to fight Israel for the fulfillment of their cause.

When asked about this intention, a close confidante of Netanyahu brushed it off as a veiled threat to the international community.

Talking to senior Palestinian officials, one comes away with a sense that a great determination to move alone, both diplomatically and with violence, is currently emerging — 50 years of occupation seems more than they can tolerate.