Is Israel already a binational state?

Palestinians believe that calling for a binational state will force the international community to engage in a realistic two-state solution in 2017 and force the Israeli public to see the necessity of Palestinian statehood. 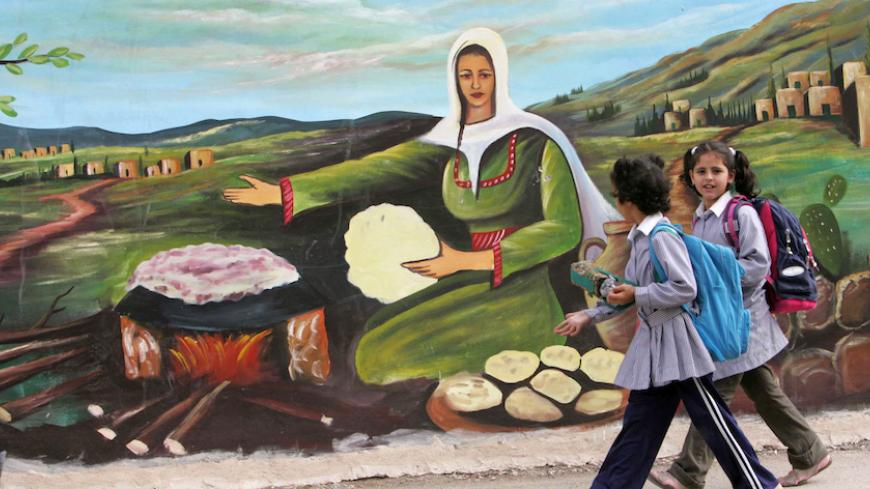 Palestinian schoolgirls walk past a mural painted on a wall in the West Bank city of Jenin, Nov. 7, 2007. - REUTERS/Mohamad Torokman

In the Palestinian Authority (PA), there is a sense of great desperation. People are following with disdain the US election campaigns and conventions. The Palestinian issue is not discussed, as all right-wing Israeli positions are adopted enthusiastically by both parties. There is also great anger at Egypt. Foreign Minister Sameh Shoukry’s visit to Israel July 10 was perceived as an Egyptian betrayal of the Palestinian cause. The European Union, mainly France, is perceived as better intentioned but too weak to act on its own. In this situation, 2017 promises to be a year of stalemate, with a US administration transition, undisturbed Israeli settlement and occupation policies, and great Palestinian desolation and anger.

The Palestinian leadership is thinking of a game changer for 2017. A senior PLO official who spoke to Al-Monitor on condition of anonymity said, “Obviously, the alternative to a two-state solution process is violence, an armed intifada and Hamas terror; yet we need to define a new political goal that is more realistic.” He told Al-Monitor that deliberations on this goal are taking place among the leadership of the PLO. An option that is being seriously discussed is a binational state: to demand from Israel and the international community equal civil, political and human rights for the Palestinians of the West Bank, while delaying the statehood issue. This, in his view, will leave the international community with no choice but to either act in favor of a two-state solution based on the 1967 lines or pressure Israel for equal rights for Palestinians in the given situation. It will force Israel to choose between being a binational state or an apartheid state.

The senior PLO official outlined a plan for the attainment of a binational state. The first step would be a Palestinian statement to the UN General Assembly that the Palestinian people have the right to self-determination in an independent state on the 1967 lines with East Jerusalem as its capital. Yet given the international and regional stalemate and Israel’s active annexation policies, the PA is demanding equal rights for Palestinian citizens in the West Bank within a binational state.

Such equal rights, according to the PLO official, would pertain to full political, civil and human rights. Most importantly, the Palestinians would have the right to be elected to the parliament of the binational state and have the same voting rights like Israelis in the bilateral state. The official told Al-Monitor, “Israelis must understand that the alternative to a two-state solution is a binational state in which Palestinians constitute half of the population.” The Palestinian move is both of strategic and tactical nature. Strategically, they believe that such a move will force the international community to engage in a realistic two-state solution in 2017, and tactically, it is aimed at Israeli public opinion in making the case for the preference of Palestinian statehood.

In the view of the Palestinian leadership, such a move would, at the very least, result in placing the Palestinian statehood issue on the international agenda, from which it seems to have evaporated because of the Islamic State threat and the US elections. The EU would feel induced to act more vigorously at the beginning of 2017 while a new US administration is taking over. The official said, “No one can underestimate the eventuality of a binational state because in reality it is already happening.”

A senior Israeli Foreign Ministry official dealing with policy analysis of the Palestinian issue told Al-Monitor on condition of anonymity that no one in official Jerusalem takes this Palestinian threat seriously. He said, “The Palestinians of the West Bank have their full rights within the Palestinian Authority. The lack of democracy there is not Israel’s fault. Our position is clear: only bilateral and unconditional negotiations on a two-state solution with recognition of Israel as a Jewish state.”

The Israeli position is wrong. It’s not a matter of democracy for Palestinians, but rather of freedom and self-determination. Furthermore, a binational state already exists from the river to the sea — its founder is the occupation and its founding fathers are the settlers.

The planned Palestinian move stands little chance. Yet with it they could make a better case to the world that the current situation is untenable.

Israel itself has every interest to avoid a binational state where, in not very long, Jews will be a minority.