How Palestinians plan to mark 50 years of occupation

For June 2017, Palestinian leadership is planning a major Palestinian and international political and public campaign on 50 years of the occupation. 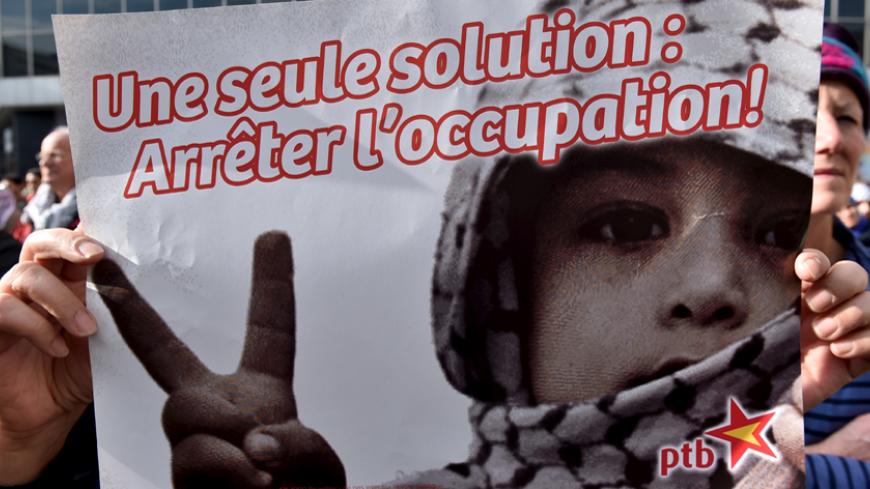 A protester holds a sign, which reads "Only one solution: Stop occupation," during a demonstration in solidarity with Palestinians, in Brussels, Oct. 18, 2015. A senior official in Brussels told Al-Monitor that there is a strong sense of urgency at the EU headquarters as well as in many EU capitals for a two-state solution. - REUTERS/Eric Vidal

June 5, 2017, will mark 50 years since the Six Day War — half a century of the Israeli occupation of the West Bank. The Palestinian public is very mindful and conscious of this date. Fifty years after the occupation, the leadership in Ramallah is well aware that time is running out on the patience of their people to give diplomacy a chance.

With this in mind, the Palestinian leadership is planning a major Palestinian and international political and public campaign on 50 years of the occupation. A senior PLO official in Ramallah told Al-Monitor on condition of anonymity that “50 years of military occupation spells to every single Palestinian that we, with whatever means we possess, have to end our humiliation and gain our independence. Strategically, June 2017 is an opportunity to place the Palestinian issue on the international agenda.”

According to the official, the Palestinian Authority (PA) and the PLO organs are planning a massive international campaign aimed at several goals.

One important objective of the campaign would be galvanizing Palestinian public opinion to a common struggle with the Fatah leadership that combines resistance and hope. The campaign would aspire to convince Israeli public opinion that the occupation and settlement expansion are untenable — that there is a price for these policies. Also, it will try to enlist the international community, mainly the members of the Middle East Quartet (United States, European Union, United Nations and Russia), to make 2017 the year of Palestinian independence.

The authors of the campaign hope to launch public campaigns on ending the occupation, also with the EU, to enlist the Arab League in a diplomatic campaign at the UN and to convince the next US administration of the urgency of a two-state solution.

The PLO official said that one cannot rule out a “50-year occupation intifada,” but that Palestinian President Mahmoud Abbas prefers to avoid it: “In 2017, the rules of the game will change. We have come to the end of our patience.”

The official stressed the importance of enlisting Israeli civil society actors who were already active on the anti-occupation front to joint anti-occupation manifestations during 2017.

According to the source, Palestinian representatives held talks on the issue with senior EU officials in Brussels as well as with representatives of the main EU countries in Ramallah and East Jerusalem. The EU is supportive of making 2017 a year of Israeli-Palestinian conflict resolution. European officials believe that European public opinion will be attentive to the message of “enough with the occupation.”

A senior official in Brussels close to EU High Representative for Foreign Affairs and Security Policy Federica Mogherini told Al-Monitor on condition of anonymity that there is a strong sense of urgency at the EU headquarters as well as in many EU capitals. The total deadlock in the peace process is dangerous to European interests in the region as it could lead to an outbreak of uncontrollable violence at a time where Europe is in need of partnerships with pragmatic Arab states in the fight against the Islamic State: “We are working in the context of the Quartet to reach a policy platform for a two-state solution before the end of Barack Obama’s presidency.”

Mogherini claimed that the most concerned EU partners are France and Germany, which are active also in preparing the Paris conference on May 30.

Regarding the 50-year anniversary of the occupation campaign, the EU official confirmed the coordination with the Palestinian leadership. Within the EU headquarters, policy planners are exploring several policy actions.

A possible route could be cooperation with the PA on holding special events at the European Parliament in Strasbourg and in several parliaments of member states. A second option is holding special seminars at European academic institutions on 50 years of occupation and on a two-state solution. Other policy actions could be cooperating in 2017 with the PA on Palestinian nation-building and the planning of modern accountable state institutions; continuing diplomatic activity in favor of a two-state solution following up on the Quartet’s upcoming report and the Paris conference; a possible French-sponsored UN Security Council resolution on the outlines of a two-state solution based on the 1967 lines; further boycotting of Israeli settlements and their goods; and coordinating with the next US administration on policies and events linked to June 2017.

Israel is aware of the plans. A senior Israeli Foreign Ministry official in charge of Israel’s public relations policies told Al-Monitor on condition of anonymity that Israel will launch its own campaign in 2017, blaming the Palestinians for the political stalemate, terror and incitement to violence: “We will emphasize 100 years of Arab terror.”

“Enough with the occupation” should be the Israeli slogan instead. Occupation is the biggest strategic danger to Israel’s identity, to its security and its international relations. It is turning Israel into a binational, immoral state, and it carries severe ramifications for Israel’s democracy.