Both Israeli Prime Minister Benjamin Netanyahu and Palestinian President Mahmoud Abbas seem to discuss the French initiative for an international conference, though Netanyahu, unchanged, is not really interested in advancing negotiations with the Palestinians. 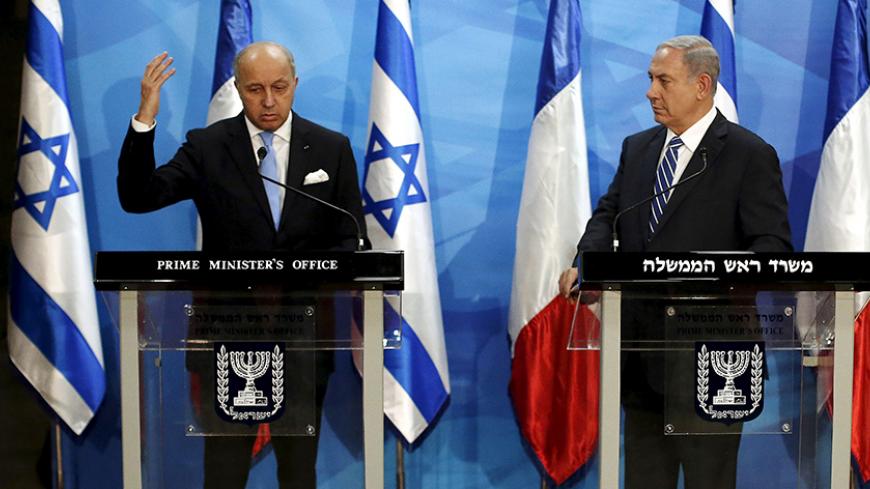 When outgoing French Foreign Minister Laurent Fabius announced the French initiative to convene an international peace conference on a two-state solution on Jan. 29, it was perceived both in Jerusalem and Ramallah merely as a declarative gesture in order to bolster the position of embattled Palestinian President Mahmoud Abbas.

But the French take their initiative more seriously. A French Foreign Ministry official told Al-Monitor on condition of anonymity that Paris is holding discreet talks with officials on the Israeli and Palestinian sides to explore whether a common basis for such an international conference could be established. According to the official, who is himself involved in those secret talks, there was no flat rejection by either of the parties on the principle of an international conference. Yet, the initial gap between the parties on the necessary foundations and terms of reference for such a conference is very significant — possibly insurmountable.

The initial Israeli reaction was that Prime Minister Benjamin Netanyahu would not discuss the eventuality of a peace conference unless France withdraws its ultimatum of recognizing Palestine as a state (in case the initiative is rejected). Furthermore, officials in the prime minister’s office made it clear to the French that negotiations would have to be bilateral and unconditional. An international gathering without setting pre-conditions for negotiation could launch direct negotiations, as did the Madrid Conference of 1991 in which Netanyahu participated as deputy foreign minister.

The Palestinian position, as expressed to the French, is that the conference has to be based on the Arab Peace Initiative of 2002, referring to the 1967 lines as future borders and to East Jerusalem as the Palestinian capital. Establishing the Arab initiative as the basis for a peace conference would also bring about the support of most of the Arab League member states for a Palestinian diplomatic move.

A senior official in the Israeli Foreign Ministry told Al-Monitor on condition of anonymity that Israel insists on unconditional bilateral negotiations. The official claimed that this is the unambiguous position of the prime minister, whose only interest in this context is to prevent French recognition of a Palestinian state. The Israeli Cabinet is unanimously backing Netanyahu in his rejection. Yet, the official noted that there were some dissenting voices within the Foreign Ministry and the defense establishment. He said that senior officials in the Israel Defense Forces are recommending a policy move toward a peace process in parallel to economic confidence-building measures as a way to prevent a much greater outbreak of violence.

Such positions were expressed at the Foreign Ministry’s Center for Political Research. Officials there have recommended a qualified, conditional acceptance of the French initiative, to prevent a diplomatic avalanche in the case that France indeed recognizes the state of Palestine. These officials recommended that Netanyahu, who is also the foreign minister, advance an Israeli terms of reference for such a conference that highlight Israel’s security interests.

Netanyahu’s stance and motivations regarding the French initiative are clear: any move toward negotiations within an international framework could destabilize his right-wing coalition. He also believes that President Barack Obama is, as of now, a “lame duck” president and that therefore Israel will be immune to any international pressure.

Abbas’ position is also clear: He strives to prevent an armed intifada that could also endanger his rule and is therefore looking for a diplomatic anchor that would strengthen him vis-a-vis the more radical voices in Fatah and Hamas.

These two positions are not reconcilable. Netanyahu would like to have the best of all worlds: keep the settlement expansion in order to maintain his right-wing coalition and base, count on Abbas’ security cooperation for the prevention of an armed intifada, reject peace initiatives — be they American or European — and at the same time maintain good relations with Israel’s best friends abroad. His experience shows that he generally gets away with these contradictory policies. Indeed, he fought Obama in Congress on the Iran deal, but is now in the process of securing a comprehensive US defense package and is not being subjected to US pressure on a two-state solution.

With the volatile situation inside the Palestinian Authority, Netanyahu might be forced to wake up and recognize a different reality. The aftermath of rejecting the international peace conference could bring about a violent deterioration in the situation emanating from the West Bank, as well as a diplomatic deterioration in terms of European recognition of the state of Palestine and international punitive measures on settlement expansion. In any case, the prime minister’s right-wing base will remain intact, which at the end of the day is his prime interest.