What the world is telling Palestinians, Israelis and Trump

European diplomats believe the international attendance at the second Paris conference reflects broad support for a two-state solution to the Israeli-Palestinian conflict. 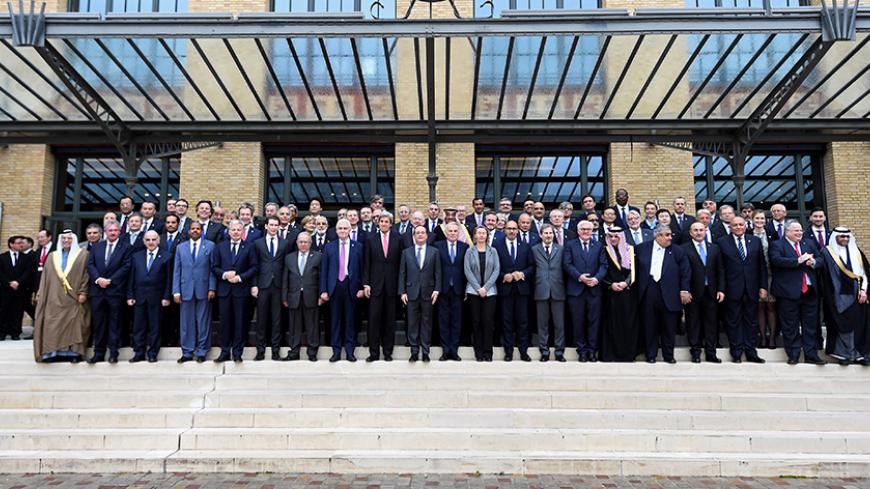 Foreign ministers and representatives from around 70 countries pose for a group picture during the Middle East peace conference in Paris, Jan. 15, 2017. - REUTERS/Bertrand Guay

PARIS — UN Security Council Resolution 2334, passed Dec. 23 affirming the illegality of Israeli settlements, shifted the international diplomatic agenda, focusing global attention once again on the Israeli-Palestinian conflict. The resolution was just the first in a series of steps concerning the conflict that captured the world's attention. One can also include the Dec. 28 speech by US Secretary of State John Kerry detailing parameters for advancing the two-state solution. These two events alone guaranteed that the world would pay attention to the Jan. 15 Paris conference for peace in the Middle East and its concluding joint declaration.

Focus on the conference continued after its conclusion, with the European Union (EU) Foreign Affairs Council meeting Jan. 16 to address its results. Although British intervention at the meeting blocked foreign ministers' adoption of the Paris conference's joint declaration, which states that the two-state solution is the only viable road to peace and security for Israelis and Palestinians, it will not diminish a European effort to advance the declaration's conclusions.

Contrary to the stance espoused by France and the rest of the international community, it seems that Israel and Britain shared the same perspective on the conference, and while the United States participated, it was not entirely behind the idea. It remains unclear whether the recent series of diplomatic actions will help advance or hinder a two-state process.

Many forces intervened publicly and behind the scenes in the three weeks of drama. Western diplomats estimate that after the first Paris conference, held June 3, France actually tried to play down the second Paris conference, judging that its timing was unfortunate. The world had been preoccupied with Syria, terror attacks and fighting the Islamic State. On top of that, everything seemed to have been on hold awaiting US President-elect Donald Trump’s inauguration. Resolution 2334 and Kerry's speech changed this dynamic.

“France has succeeded with its gamble, and I think that they themselves were surprised by the success,” a senior EU diplomat told Al-Monitor on condition of anonymity. “They positioned the conference at the center of global attention, they got 70 delegations from all over the world to participate, and they even managed to produce a text agreed [on] by all 70 representatives.”

Israel sees things differently. “This conference should have never taken place,” said Aliza Bin Noun, Israel’s ambassador to France. “We are all familiar with current circumstances and the upcoming changes in the US, so this whole episode is a thing of the past.”

Israeli diplomats had in recent weeks kept close tabs on discussions among conference participants as they attempted to formulate a joint declaration. “The final statement doesn’t include any details of the Kerry speech parameters,” said an Israeli senior diplomat who spoke on condition of anonymity. “It doesn’t include any follow-up committee. It doesn’t refer directly to the June 4, 1967, borders. We continue to oppose the conference and its conclusions, but as a reference paper, which we couldn’t block, it is a text we can live with.”

Israel was not the only one trying to change the joint declaration. Debate on it amid high-level officials of the participating countries lasted well into the night Jan. 14, on the eve of the conference. It was Kerry who tipped the balance, after talking with Israeli Prime Minister Benjamin Netanyahu on the morning of Jan. 15.

The Israeli source said, “It is true that Kerry and Netanyahu spoke just before the text was adopted and that the text was considerably mellowed down as a consequence, but there were other factors, too — mainly the Israelis' angry and very loud reaction [to] Resolution 2334, in which the French themselves were involved. The resolution did boost the whole conference idea, but at the same time it also put the French in an uncomfortable spot, depicting them as the ones who would push Israel to the edge, just before Trump takes office."

A top French diplomat speaking on condition of anonymity said last week that France had discussed the conference with Trump associates, “who listened to us,” indicating in diplomatic terms that little came of the meetings.

“Jared Kushner [Trump's son-in-law and senior adviser] met with senior British officials before the Paris conference and the European foreign ministers’ council meeting in Brussels,” said the EU source. “Obviously, these meetings influenced the decision by [Britain] at the council in Brussels to block the adoption of the Paris conference conclusions. We were not so surprised by the British attitude, as they didn’t send their foreign minister to the conference and made it clear that they did not support it. But blocking a text in this high European forum is a brutal move, very unlike the Brits. Obviously, they were trying to please their new friends.”

The source added that Hungary and Bulgaria also played a role in blocking adoption of the text, and asserted, “Israel [tried] to persuade several actors to oppose the conference. They do not realize that a solid, consistent position by the EU is eventually in the interest of Israel. Instead, they are trying to divide EU members.”

Another European diplomat told Al-Monitor, “Whatever reservations one might have about the concluding text, and even if the final draft was less provocative then preceding drafts, the fact is that the international community made its position clear vis-a-vis the new Trump administration, and that’s an achievement. One must look at the whole picture, not just the details. We have marked our line, stating that we will not let go of the two-state solution. It is not only us who need to confront Trump. The Trump administration, for its part, will also have to confront this reality endorsed by most of the world.”