Why Hamas and Israel both oppose French peace initiative 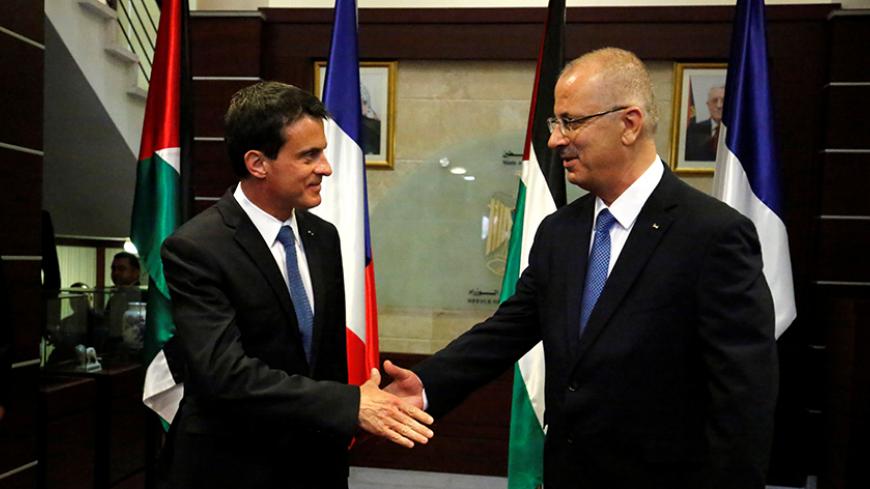 GAZA CITY, Gaza Strip — France is moving forward with plans for a June 3 international peace conference in Paris designed to revive the peace process between Israelis and Palestinians — despite outright rejection by Israel and Hamas.

France is bringing the United States and other countries to the table, but without the initial participation of Israel or the Palestinian Authority. The PA supports this approach, but Israeli Prime Minister Benjamin Netanyahu insists on bilateral negotiations, and Hamas rejects any talk of peace.

The French initiative includes five items: returning to the 1967 borders between Israel and a future Palestinian state; making Jerusalem the capital of the two states; determining a two-year margin for negotiations to reach a final agreement; having an international follow-up on the peace process while leaving the negotiations between Israel and the Palestinians; and having the negotiations sponsored by an international support group that would include representatives of Arab countries, the European Union and the UN Security Council member states.​

French Prime Minister Manuel Valls met with no success when he visited Israel and the Palestinian territories this week to discuss the initiative.

Speaking at the Israeli parliament May 23, Netanyahu said he told Valls he wanted to carry on with the peace process with the Palestinians on the basis of a demilitarized Palestinian state that recognizes Israel as a Jewish state and a national homeland for the Jewish people.

He added, "These are not conditions to start negotiations, but the end of a successful political path that incorporates direct bilateral negotiations between Palestinians and Israelis, without preconditions, and without international dictates."

Wassel Abu Youssef, a member of the PLO Executive Committee, told Al-Monitor, "The idea of the [French] conference is based on a meeting between the foreign ministers of 20 countries in addition to the European Union and the United Nations, but without the participation of Israelis and Palestinians. Should this conference be a success, it would usher in an international summit to be held in the second half of 2016 in the presence of the PA and Israeli leaders."

Abu Youssef pointed out that direct bilateral negotiations "have not yielded any tangible outcome since the PA's formation in 1993."

"This conference is of paramount importance for the Palestinians because it serves as an important international opportunity to emphasize the need to implement the resolutions of the UN Security Council and the General Assembly, which come to the advantage of Palestinians." Anything less, he said, would be "fruitless efforts."

"Meeting the Palestinian rights is our precondition to any initiative, mainly the withdrawal from the entire occupied Palestinian territories along the 1967 borders."

Commenting on Netanyahu's conditions for resuming negotiations, Abu Youssef said, "We will refuse to recognize the Jewishness of the State of Israel, and we insist on it. Should we accept this, it would put the Arab minority's fate in Israel at risk. This is why we believe Netanyahu's principles are a stumbling block in front of the French initiative."

Commenting on the steps that the PA might take in the event of the failure of the conference, Abu Youssef said, "Our option is clear, which is to continue our actions in the corridors of the international forums to establish a Palestinian state, put an end to the occupation and hold Israel accountable before the International Criminal Court for its crimes against Palestinians."

He also stressed the importance of the conference as it turns the page on the "biased" US sponsorship in the negotiations, saying this bias "has caused the failure of all previous international efforts to end the Palestinian-Israeli conflict."

Meanwhile, Hamas rejects any international efforts to resume peace talks that would place the PA and Israel back on the negotiation track.

"Any proposals to bring the two parties back to the negotiating table aim at slaying the Palestinian cause, giving the occupation forces more time to expand their settlements and to further confiscate Palestinian lands," Hamas leader Yahya Moussa told Al-Monitor.

"The international community cannot offer any solution to the Israeli-Palestinian conflict without the approval of Hamas, which won the Palestinian legislative elections in 2006."

Moussa stressed that Hamas' solution to end the conflict is based "on the Israeli withdrawal from the entire Palestinian territories occupied since 1948, the return of the Palestinian refugees who have been displaced from their home and lands since 1948 and the liberation of all Palestinian prisoners from Israeli jails." Hamas will always opt for the armed resistance until the "restoration of the Palestinian rights," he added.

Commenting on Hamas' rejection of the conference, Abu Youssef said, "The Palestinian people have nothing to lose from moving forward in this conference. Let us try the efforts to end the conflict and bring peace to the region that are not — for once — American-tinted. However, to ensure the success of such efforts, there must be a real international will to end the occupation."

Political analyst Talal Okal said he does not entertain any hopes of a successful conference.

"The Israeli government's insistence on continuing its settlement policy, the Judaization of Jerusalem and the ongoing confiscation of Palestinian land does not bode success of this conference," he told Al-Monitor.

"The international community does not exert any real pressure on Israel, as those exerted on Iran in the context of resolving the nuclear issue. Thus, Israel does not feel obliged to move forward toward peace with the Palestinians. On the contrary, it is setting further plans for settlements and expansions," Okal added.

Although US Secretary of State John Kerry has agreed to attend the conference, the US administration has yet to take a stance in favor of the French initiative.

In this context, Okal said, "The important thing is that the US does not oppose the initiative. I believe it did not reject it as Israel did because this would show the world its domination and intransigence in resolving the conflict in accordance to its unilateral vision only."

Political analyst Hassan Abdo shares the same pessimistic view on the conference. "I do not believe the French initiative will be a window to solving the conflict. Since the beginning of the Israeli-Palestinian conflict, not one state or international institution such as the UN or the Security Council has adopted any approach binding Israel to implement any international decisions in favor of the Palestinians," he told Al-Monitor.

"I believe the conference will end in mere visions and nonbinding recommendations to Israel," he added.

Abdo also ruled out a peace deal with Israel in the future as long as Netanyahu is in office. "Even if the PA agreed to all of Israel's demands — such as the recognition of the Jewishness of the state and the exchange of territories — Netanyahu will continue to demand further concessions," he said.

As France continues its preparations for the conference, Palestinians hold out hope that this might put an end to the Israeli occupation. But they believe that the real solution remains in exerting deterrent pressure on Israel to force it to act accordingly.