The Palestinian Authority announced its intention to sue Britain for the Balfour Declaration, which allowed for the establishment of the State of Israel. 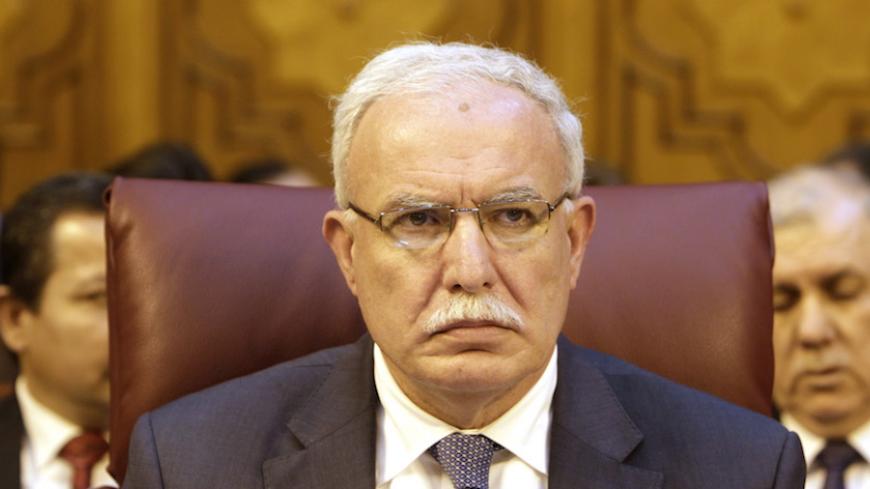 GAZA CITY, Gaza Strip — Palestinian Foreign Affairs Minister Riyad Malki gave a speech on behalf of President Mahmoud Abbas at the 27th Arab League Summit July 25 in the Mauritanian capital, Nouakchott. In his speech, he said that the Palestinian Authority (PA) intends to file a lawsuit against Britain in international courts for issuing the Balfour Declaration in 1917, which was used as a basis for the creation of Israel on Palestinian territories in 1948.

“We ask the secretariat-general of the Arab League to help us bring a case against the British government for issuing the Balfour Declaration, which resulted in the Palestinian Nakba [in 1948],” Malki said.

According to the Palestinian Central Bureau of Statistics, the Nakba occurred when the Israeli forces expelled over 800,000 Palestinians from their villages and towns, forcing them to move to the West Bank, the Gaza Strip and neighboring Arab countries such as Syria, Jordan and Lebanon. Israeli forces took over 774 Palestinian villages and cities, 531 of which they destroyed, and committed over 70 massacres, resulting in the death of over 15,000 Palestinians during the Nakba, according to the same source.

In a written press statement published July 27, Israeli Prime Minister Benjamin Netanyahu criticized the PA’s attempt to sue Britain and said that Israel will work to thwart the move. He further noted that such step indicates that the essence of the Israeli-Palestinian conflict lies in the Palestinian refusal to recognize the Jewish state, whatever its borders are.

Although Hamas did not make an official statement in this regard, Al-Monitor contacted Hamas leader Yahya Moussa who stressed that his movement welcomes any Palestinian action to sue Britain for issuing the Balfour Declaration. But at the same time, he said that Hamas doubts the PA’s seriousness in going through with its decision.

“We doubt the PA’s intention to sue Britain as the PA is yet to succeed in obtaining any Palestinian right through international courts and forums. So we believe it is only seeking to revive the settlement [peace] process with Israel,” Moussa said.

However, Wassel Abu Youssef, a member of the Executive Committee of the Palestine Liberation Organization (PLO), noted that Abbas is “dead serious” in his efforts to sue Britain for issuing the Balfour Declaration and setting the conditions in Palestine to establish the State of Israel during the British Mandate over Palestine from 1923 to 1948.

Abu Youssef told Al-Monitor, “The PA is now considering the mechanisms of bringing a case against Britain to the International Criminal Court, to compel it to rectify this crime.”

He explained that the British government has to recognize the Palestinian state, pressure Israel to withdraw from the Palestinian territories occupied in 1967 and put an end to the repercussions of the Balfour Declaration. He said that in the context of these repercussions, Palestinian refugees who were expelled from their homes during the 1948 Nakba are still living in countries such as Syria, Lebanon, Sweden and others, adding, “So we must ensure Palestinian rights, most notably the refugees’ right to return. We need to hold Israel accountable for the brutal massacres it committed, such as the massacre of Deir Yassin near Jerusalem that occurred on April 9, 1948, and killed more than 250 Palestinians, and the Kafr Kassem massacre that was committed on Oct. 29, 1956, killing about 50 unarmed Palestinians. We finally need to put an end to the Israeli occupation of the Palestinian lands occupied in 1967.”

Expert in international law Hanna Issa told Al-Monitor, “The British government is yet to offer an apology for the Balfour Declaration, which shows that it does not feel guilty about it. Not only that, Britain even contributed to helping Israeli leaders escape legal punishment for their crimes against the Palestinians. Following lawsuits by human rights organizations to the British courts over the past years, former Israeli Foreign Minister Tzipi Livni was subpoenaed by the British police June 30 during her visit to Britain, to investigate war crimes committed during the first Israeli war on Gaza (Operation Cast Lead) that lasted from Dec. 27, 2008, until Jan. 18, 2009. However, the British government intervened to protect Livni by granting her special immunity, as the government is allowed to grant immunity to whomever it chooses.”

Several human rights organizations have condemned the British government for granting special immunity to Livni. In a statement published on its website July 4, the Arab Organization for Human Rights in the UK considered this act as a “legal cover to protect Israelis.”

Commenting on the PA’s measures to sue Britain, Issa said, “I expect the PA to follow these successive steps; it should first resort to the [UN] Security Council to adopt a resolution condemning the Balfour Declaration — which will [most probably] be vetoed by Britain since it is a permanent member of the Security Council. [In this case], the PA should then address the UN General Assembly and demand it to consider the case in accordance with the Uniting for Peace resolution [No. 377] issued in 1950, which gives the UN [General Assembly] the right to intervene if the Security Council fails to exercise [its responsibility] should one member [Britain, in this case] use its veto. The resolution gives the UN the right to review the case and make recommendations to take collective measures aimed at maintaining peace and security, and these measures include the formation of a special court to look into the case.”

However, Walid al-Moudallal, a political science professor at the Islamic University of Gaza, questioned the seriousness of the PA’s intention to file a lawsuit against Britain, telling Al-Monitor, “It was no more than an attempt at political blackmail against Britain, and an attempt to divert attention from the PA’s political failure and inability to end the Israeli occupation ever since the PA was founded in 1993.”

He said, “Since 1948 and until this day, the PA never sought this, and that is why I believe it is an attempt to push Britain into taking political measures to pressure Israel to resume peace negotiations in order to put an end to settlements and withdraw from the Palestinian territories occupied in 1967.”

He added, “It would be better for the PA to first end all political and economic agreements with Israel, such as the Oslo Accord of 1993 and the Paris Protocol of 1994, in addition to halting security coordination as these agreements are in favor of Israel.”

Speaking about the possibility of Britain apologizing to the Palestinian people for issuing the Balfour Declaration, Moudallal said, “I do not think Britain will apologize, because that would imply that Britain will have to abide by a set of moral and financial responsibilities toward the Palestinian people, as happened with the 1952 Luxembourg Agreement when Germany had to pay reparations to the Jews because of the Holocaust.”

Political analyst Eyad Qara agreed with Moudallal and said that the PA’s intention to sue Britain was “not serious,” adding that this approach “does not hold any legal dimensions.”

Qara said in this regard, “The PA made this announcement because it feels hopeless that the international community is not interacting with all attempts to revive the peace process with the Israeli occupation — the last of which was the French Peace Initiative on May 19. This is because the international community is preoccupied with the conflict in Syria. Thus I believe the PA only aims to revive the settlement process [through this step].”

He added, “The PA is upset as the international resolutions that are in favor of the Palestinian cause are not being implemented, such as Resolution 194 issued by the UN in 1948, which acknowledged the Palestinian refugees’ right to return. The PA is seeking to push Britain into taking action to implement those resolutions.”