Palestinian activists are taking practical measures to prepare for the return of refugees, Jillian Kestler-D’amours writes. 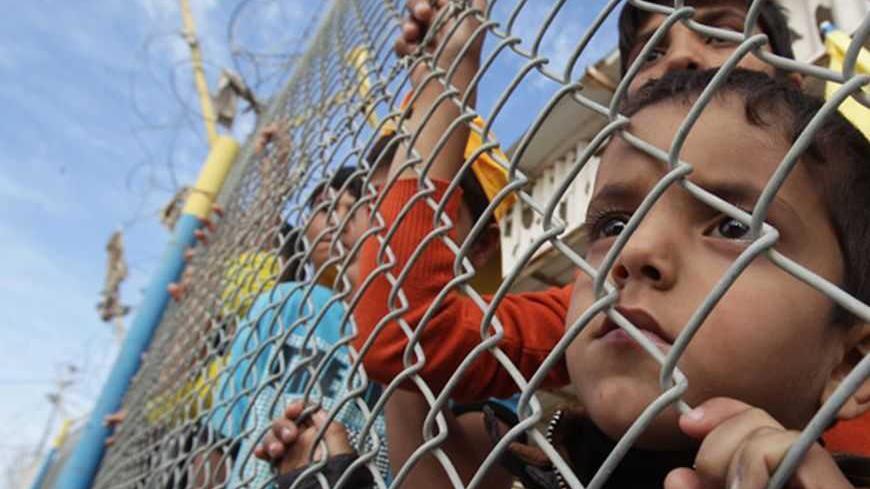 IQRIT, NORTHERN GALILEE — Standing on a rocky hilltop overlooking Lebanon, 23-year-old Haytham Sbait’s face lights up when asked what life would be like if he was able to live in his family’s ancestral village permanently.

“Simple,” the 23-year-old says, sipping tea from a paper cup as two brown donkeys graze in the short grass in front of him. “A small house, a horse, a donkey, the land. Simple.”

Sbait’s family is originally from the village of Iqrit. Located in the Galilee region, 25 kilometers north of Acre, Iqrit was depopulated shortly after the Israeli state was created in 1948.

After Israel blocked early attempts to return to the village, the Israeli Supreme Court ruled that residents had the right to go back to Iqrit in 1951. The Israeli army ignored the ruling, however, and destroyed the village shortly thereafter.

Only the local church and cemetery are what remain of the original Palestinian-Christian village.

A third-generation, internally-displaced Palestinian refugee, Sbait and almost two dozen other Palestinian youth moved back to Iqrit in August of last year. Living in two small rooms, built as extensions off the church, the young men sleep in the village in shifts — usually two or three nights per week, each – and maintain a constant presence in the village.

They say living in Iqrit today marks the culmination of decades of longing to return.

“It’s a dream. Since I was born, I was raised on the stories of Iqrit,” Sbait said. “I feel something: that I have to be here, to live here, to continue the struggle of my parents and my grandparents.”

The issue of Palestinian refugees is considered a final status issue, along with borders, security and control over Jerusalem. It has largely been left up to so-called “peace process” negotiations, which have been stalled for years, mostly as a result of unhindered Israeli settlement building.

While US President Barack Obama made no mention of Palestinian refugees during his recent visit to Israel, the issue remains at the heart of the Israeli-Palestinian conflict.

Before and shortly after the founding of the state of Israel in May 1948, approximately 750,000 Palestinians — or three-quarters of the Palestinian population — fled or were expelled from their homes, in what is known as the Palestinian Nakba (catastrophe).

At least 450 Palestinian villages were depopulated and destroyed to prevent the return of the refugees by Israeli forces. In 1949, the United Nations Relief and Works Agency (UNRWA) was established to provide services to Palestinian refugees.

UNRWA defines a Palestinian refugee as someone “whose normal place of residence was Palestine between June 1946 and May 1948, [and] who lost both their homes and means of livelihood as a result of the 1948 Arab-Israeli conflict.” The United Nations also considers refugees’ descendants to be refugees.

Today, there are over five million Palestinian refugees, representing three-quarters of the total Palestinian population worldwide.

In December 1948, the United Nations General Assembly passed Resolution 194, which stated that “refugees wishing to return to their homes and live at peace with their neighbors should be permitted to do so at the earliest practicable date, and that compensation should be paid for the property of those choosing not to return and for loss of or damage to property.”

For Israel, however, Palestinian refugee return is almost non-negotiable. It is viewed in apocalyptic terms as causing the destruction of the state, forever altering its demographic balance and Jewish majority.

“It doesn’t take a Harvard degree to realize that enacting this claim would cause Israel’s destruction. It perpetuates a situation that takes us back to a one-state solution,” said Israeli envoy to the UN, Ron Prosor, during a recent meeting aiming to limit the scope of how the United Nations defines who is a Palestinian refugee.

In 2011, Israeli Prime Minister Benjamin Netanyahu told Obama that the return of Palestinian refugees to Israel is “not going to happen.”

“This approach to talk about practical return is making the return on one side realistic, and on the other side helping to put this issue on the table,” said Umar Ighbarieh, director of the “planning return” project at Zochrot, a Tel Aviv-based group that aims to educate Israelis about the Palestinian Nakba.

The project looks at both the refugees’ collective and individual rights, and is based on international law and the basic assumption that Palestinian refugees have the right to return to their homeland.

Specifically, it involves re-imagining the rebuilding of destroyed Palestinian villages on a case-by-case basis, and speaking directly with refugees and refugee rights groups in the West Bank, Gaza Strip, Lebanon, Jordan, Syria and inside Israel.

“The big challenge today is to convince the people, of course the Israelis, that return is also good for them,” Ighbarieh said. “You [need to] prepare a plan in order to prepare the communities [and] the people — not only the land, not only the material, not only the cities and the houses — for a new era, for post-colonialism.”

Presenting Palestinian refugees and their descendants with a realistic view of what return will actually mean — how will tens of thousands of refugees and their families return to a village that was home to only 1,000 people in 1948, for instance? — is also an important consideration.

“Reality may be completely different after 65 years of displacement and occupation and Israeli development of those areas,” said Manar Makhoul, networking and advocacy officer at Badil, a Bethlehem-based resource center for Palestinian refugee rights, which has partnered with Zochrot on the planning return project.

“In these cases where you can’t return to that place — because you have an airport, or a road running through that field — there is a need to think of an alternative or a creative solution for this return.”

Refugees key to any solution

Palestinian Authority (PA) President Mahmoud Abbas enraged Palestinians in Nov. 2012 after he told an Israeli television channel that he had no right to return to Safed, a town in northern Israel that his family fled from in 1948.

“I want to see Safed. It's my right to see it, but not to live there,” Abbas reportedly said. “I am a refugee, but I am living in Ramallah. I believe that the West Bank and Gaza Strip is Palestine, and the other parts are Israel.”

In 2011, The Palestine Papers — leaked diplomatic cables detailing talks between Israeli and Palestinian negotiators — also revealed that the PA was ready to make huge concessions on the number of refugees that would be allowed to return.

Only 10,000 Palestinians would be let back (1,000 annually over 10 years), and refugees wouldn’t have voting rights in a peace agreement with Israel, the Papers revealed.

Palestinian negotiator Saeb Erekat, in a meeting with US diplomats in Oct. 2009, said, “Palestinians will need to know that five million refugees will not go back. The number will be agreed as one of the options. Also the number returning to their own state will depend on annual absorption capacity.”