Israeli Prime Minister Benjamin Netanyahu went to London for the centennial ceremony of the Balfour Declaration, sidelining the essence of the declaration and its vision of peace with the Palestinians. 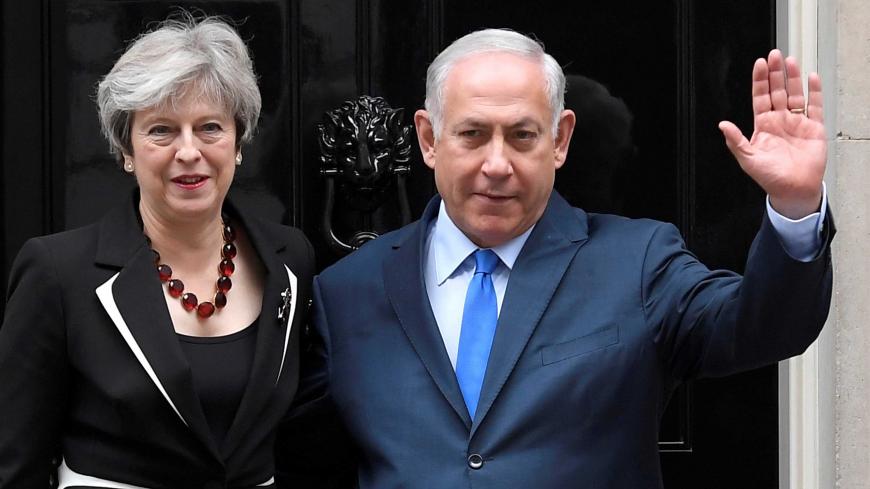 A few days ago, I went to see the play "Herzl Said" at the Gesher Theater in Tel Aviv, produced to mark the birth of the State of Israel 70 years ago. The play is based on the utopian novel “Altneuland” ("Old New Land" in German) written by the founder of Zionism, Theodor Herzl, some 120 years ago. In his book, Herzl envisioned Jews and Arabs coexisting and world leaders journeying to the country to learn about peace, tolerance, brotherhood and prosperity. Playwright Roi Chen brings Herzl back to life in 1949, shortly before his remains were brought from Austria, where he died in 1904, to be buried in the old new land (Israel). Herzl is disappointed by the religious nationalism he encounters in the Jewish state founded in 1948. He tries to convince the young Israelis he meets that if they wish, his vision of Jews and Arabs spending their vacations together on the shores of the Sea of Galilee and homosexuals being lovingly accepted by society would come true. As we know, political and social reality in Israel is turning his vision into a dream that comes true for few.

There’s no telling what Lord Arthur Balfour would have said to Prime Minister Benjamin Netanyahu were he sitting at his side during the Nov. 2 dinner thrown in honor of the Israeli leader by British Prime Minister Theresa May. The event marks the 100th anniversary of the Balfour Declaration that announced British support for the establishment of a "national home for the Jewish people" in Palestine. Judging by the op-ed penned this week by British Foreign Secretary Boris Johnson, who tried to imagine what his long-ago predecessor would have thought of the way things turned out, Balfour would not have taken part in the festivities. In the piece published in the Israeli newspaper Yedioth Ahronoth and the British Telegraph, Johnson noted that the man who 100 years ago sat under the same gilded ceiling stipulated in his declaration that “nothing shall be done which may prejudice the civil and religious rights of existing non-Jewish communities,” a caveat that “has not been fully realized.”

In his op-ed, Johnson draws a straight line between the 1917 Balfour Declaration to a document compiled by a committee headed by another fellow Briton, Lord Robert Peel, in 1937. (The Peel Commission was appointed by the British government to investigate unrest among Palestinian Arabs and Jews in Palestine.) Johnson described it as a “vision of two states for two people.” He then fast-forwards to June 4, 1967 — the Six-Day War — pointing to the border that delineated Israel from the Kingdom of Jordan as the course along which the “unfinished business of the Balfour Declaration” can be completed. That “unfinished business” has cost the lives of thousands of Jews and Arabs to date. The violent Arab rejection of United Nations Resolution 181 of Nov. 29, 1947, on the creation of a Jewish state alongside an Arab one wrought a catastrophe for the Palestinian people and gouged deep wounds in the relationship with their Jewish neighbors.

On Nov. 22, 1967, 50 years and 20 days after Balfour sent his famous letter to Lord Walter Rothschild, a leader of the British Jewish community, the UN Security Council tried its hand at completing the “unfinished business,” UN Security Council Resolution 242, that rules out the acquisition of territory by war and demands that Israel withdraw from territory it conquered to secure and recognizable borders, provided official recognition of Israel’s June 4, 1967, borders, which had until then only been recognized as a demarcation line. However, the Arab states’ refusal to recognize the State of Israel along with the growth of Palestinian terrorism, and Israel’s subsequent unilateral annexation of East Jerusalem and the settlement enterprise on which it embarked, once again took the wind out of the Balfour Declaration’s sails.

Ten years after that fateful war (1977), as always in November, Egyptian President Anwar Sadat made his historic entrance into the Knesset chamber and provided another opportunity to end the Israeli-Arab conflict. The December 1988 decision by the Palestinian National Council to recognize Resolution 242 and put an end to the armed struggle pushed the door open even wider, but successive Israeli governments preferred to open the door to additional settlements instead. The attempt to change Israel’s priorities, which began with the 1993 signing of the Oslo Accord with the Palestinians, ended with the assassination of Prime Minister Yitzhak Rabin two years later, on Nov. 4, 1995.

Twelve years on (2007), once again in November, the Annapolis Conference on Middle East peace convened by President George W. Bush pumped new blood into Balfour’s vision. In talks held in the wake of the international conference at the famed Naval Academy campus in Maryland, Prime Minister Ehud Olmert and Palestinian President Mahmoud Abbas succeeded in bridging significant gaps designed to enable realization of the two-state vision.

Netanyahu, who took over from Olmert, spares no effort in wiping out any vestige of the Palestinians in the legacy of the Balfour Declaration. He has turned it from a small cornerstone for peace between two peoples into a giant bone of contention. Things went as far as Abbas demanding last year that the Arab League support a lawsuit against Britain, claiming that the Balfour Declaration had been handed to the Jewish people at the expense of his own people.

The formula for ending the circle of violence begun with the Balfour Declaration has been in Israel’s court for 15 years. In March 2002, the Arab League summit decided to present Israel with a proposal recognizing its sovereignty over all the territory west of the 1967 line and to establish with it normal diplomatic relations. That same resolution (Arab Peace Initiative) adopted by the Arab leaders also stipulated that the solution of the Palestinian refugee problem would be based on UN Resolution 194, which Israel would also have to accept. In another historic move, Arab League representatives approved land swaps between Israel and the Palestinians in 2013. The Arab Peace Initiative, which has been ratified every year since 2002, doesn’t fall short in its contribution to the Zionist enterprise of the letter sent 100 years ago by the British foreign secretary to Jewish philanthropist Rothschild. Yet it has never been accorded the honor of a special Knesset plenary session, nor was it ever brought up for debate in the government.

Once the Balfour Declaration festivities are over, and after Netanyahu spends a weekend in London, he will return to his official residence on Jerusalem’s Balfour Street. On the street sign across from his house, the following sentence should be etched in bold letters: “His Majesty's government view with favor the establishment in Palestine of a national home for the Jewish people, and will use their best endeavors to facilitate the achievement of this object, it being clearly understood that nothing shall be done which may prejudice the civil and religious rights of existing non-Jewish communities in Palestine, or the rights and political status enjoyed by Jews in any other country.” After all, that is exactly what Herzl said. However, Herzl concluded his book with the words, “If you do not will it, a dream it is and a dream it will stay.’’