Prime Minister Benjamin Netanyahu plans on forming the next coalition with ultra-Orthodox parties that in essence do not recognize the Declaration of Independence and Israel’s founding values. 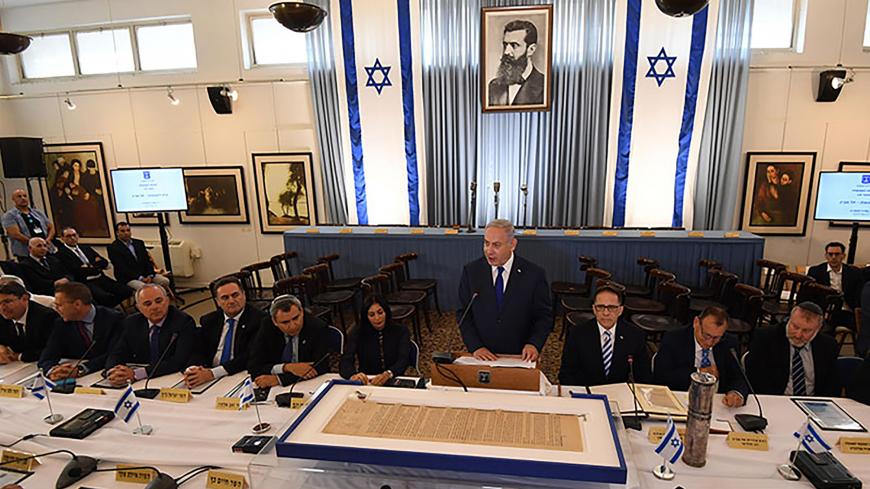 It is worth noting that a “leftist” education minister such as the late Yossi Sarid or Yuli Tamir did not write this text. It was adapted from remarks by Limor Livnat of the Likud Party who served as education minister from 2001 to 2006. What appeared obvious at the time is highly unlikely to have been approved by Israel’s previous Knesset, nor would it get through even an initial reading in Israel’s newly elected Knesset. The radical right-wing United Right party expected to be tasked with control of the Ministry of Education in Israel’s next government represents those who believe in Jewish supremacy (see, for example, the teachings of rabbis at the military preparatory academy Bnei David in the West Bank settlement of Eli) and educate a generation of nationalist religious zealots. One of the United Right’s leaders, Knesset member Bezalel Smotrich, advocates for the separation in hospitals of Jewish and Arab women who give birth.

What will a civics teacher answer a student who asks how the values of justice promised in the Declaration of Independence to all citizens — irrespective of religion, race and sex — square with a law stipulating “the right to exercise national self-determination in the State of Israel is unique to the Jewish people”? What will the teacher tell a student who asks how the promise of equality and the call to Israel’s Arabs to fulfill their role in state-building based on full and equal citizenship go hand-in-hand with a law stipulating “the State views the development of Jewish settlement as a national value and will act to encourage and promote its establishment and consolidation”?

These questions relate, of course, to the Nationality Law, anchoring the Jewish nature of the State of Israel, adopted in 2018 by the previous Knesset and received by the incoming Knesset as a fait accompli. The alienation of Israel’s 21% Arab minority that is inherent in the legislation gives off a stench of nationalism, if not outright racism, and contradicts the spirit of the Declaration of Independence. The clause on self-determination, while hurtful to the feelings of Israel’s non-Jewish citizens and undermining their affinity for the state, does not have practical meaning. On the other hand, the clause stipulating that the state will only develop Jewish settlement constitutes a direct blow to the property rights of millions of Palestinians and undermines their affinity for the land of their forefathers. The previous Knesset translated this clause into action when it legislated the so-called Regularization Law, which retroactively legalized all buildings erected in West Bank settlements in contravention of the law.

A report issued April 1 by Yesh Din, an Israeli human rights organization, foresees that 99% of the illegally built Israeli outposts will be legalized shortly and will be considered by the government as official, state-sanctioned settlements. That will apply to some 70 outposts in addition to 30 others already legalized and some 7,000 buildings put up without permits in settlements and outposts. This creeping annexation is based on eight laws — out of dozens of proposed bills awaiting the incoming Knesset — designed to impose Israeli law on occupied territory.

These moves contradict not only international law and resolutions adopted by the United Nations — the institution that paved the way for the establishment of the state — they also make a mockery of Israel’s founding legal document. The Declaration of Independence grants “the natural right of the Jewish people to be masters of their own fate, like all other nations, in their own sovereign state.” No enlightened state in the world is “sovereign” without recognized borders. What people believe it is their natural right to expropriate the lands and demolish the homes of another people living outside their sovereign state (the West Bank)?

The Declaration of Independence extols the visionary of the modern-day Jewish state, Theodor Herzl, who declared the right of the Jewish people to national revival in their land. Herzl also envisioned that clerics would seek to control institutions of the Jewish state. In his road map “The Jewish State,” Herzl wrote, “We shall therefore prevent any theocratic tendencies from coming to the fore on the part of our priesthood. We shall keep our priests within the confines of their temples in the same way as we shall keep our professional army within the confines of their barracks. Army and priesthood shall receive honors as high as their valuable functions deserve. But they must not interfere in the administration of the state which confers distinction on them, else they will conjure up difficulties without and within.”

Israel’s next government will depend more than ever on ultra-Orthodox clerics, among them eight members of Yahadut HaTorah and eight of the Shas Party, as well as an identical number of national religious lawmakers who will all serve in the newly sworn-in 21st Knesset. As Shuki Friedman, director of the Center for Religion, Nation and State at the Israel Democracy Institute notes, religion dictates all facets of life in Israel of 2019. It controls how we shall be schooled and how we will marry; whether we will have public transportation on the Sabbath (usually not) and how we will spend our day of rest; what level of Kosher certification we consume; and will we be stuck in endless traffic because road and rail works cannot be carried out on the Sabbath, only during the work week. For the ultra-Orthodox parties, Jewish law is above state law. They are against the drafting of young ultra-Orthodox to the army, they discriminate against women and they incite against the progressive Judaism stream. All that, in complete contrast to the commitment made by the founders of Israel (in the Declaration of Independence) on equal rights to all citizens; religion, race or gender making no difference.

The Declaration of Independence promises that the Jewish state — established as a solution for the homeless Jewish people — would “open the gates to all Jews.” The founders of the state called on the Jewish people in the Diaspora to immigrate to Israel and stand by its side “in the great struggle for the fulfillment of the dream of generations — the redemption of Israel.”

The gates of the homeland remain open to all Jews, but the world’s biggest and most important Jewish community — US Jewry — is gradually distancing itself from the Jewish state. On the 71st anniversary of the Declaration of Independence, Israel’s redemption is shaping up to be the fulfillment of a messianic vision in the spirit of colonialism, a democracy based on the tyranny of the majority and on an anti-liberal orthodoxy.