Growing numbers of Israelis demand the institutionalization of civil marriage in Israel, but even with a secular coalition in power this change is not in the offing. 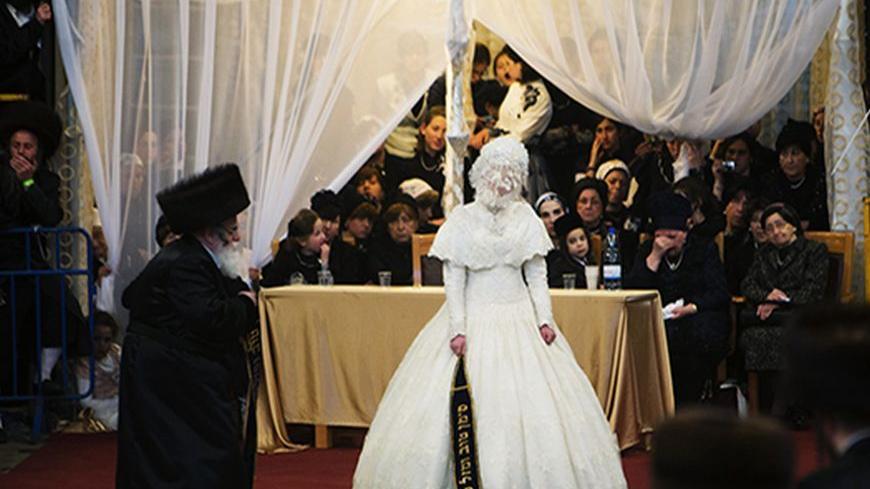 Ultra-Orthodox Jewish bride Hannah Batya Penet dances with her relative during a wedding ceremony in Jerusalem, May 22, 2013. - REUTERS/Ronen Zvulun

Once Esti and Ronnie decided to live together as a couple, they unanimously agreed to keep out of their relationship any governmental element — first and foremost the Chief Rabbinate of Israel. The Chief Rabbinate, acting as an arm of the state, has jurisdiction over many aspects of the lives of Jews in Israel, including their personal status and, inter alia, marriage and divorce issues.

A couple married within Israeli borders will not be recognized as such until it passes the whole process through the rabbinate according to Orthodox Jewish law. However, for many young Israelis this process is not that simple and it is even regarded as humiliating. A statement by a qualified witness that both would-be spouses are single has to be provided. The prospective bride must undergo the Jewish purification ritual of immersion in the mikve. And an embarrassing probe into the family history of the couple is held to verify that the two come from families known to be Jewish for at least four generations back. Couples who are not willing to go through this Via Dolorosa will not be considered qualified, or kosher, to marry under Jewish law.

Esti and Ronnie felt the growing pressure as the date set for their wedding approached. Esti was raised in an ultra-Orthodox family in Bnei Brak, an Orthodox city near Tel Aviv. At some point in her life, she left religion and joined the secular world. Her aversion to religion was so intense that she decided to marry her man of choice outside the Chief Rabbinate.

“What most annoys me is the way the state is forcing me to follow a certain course of action,” she told me this week, declining to disclose her family name. “It is as if the state were telling me: Either you marry my way or go and find yourself another arrangement. And I am asking: What about my own personal freedom? What about my free will and that of my partner? And why should I run my life according to the dictates of rabbis who are total strangers, as far as I am concerned, and who mean nothing to me? Ronnie and I have decided that we are not going to subordinate our relationship to religious dictates.”

The two held a private wedding ceremony in the presence of close family. Thus, in the eyes of the authorities, they are considered a common-law couple. This unique status deprives them of the benefits and rights granted by the state to couples married through the Chief Rabbinate.

Anyway, in spite of the numerous limitations, more and more Israelis are now getting married in a civil ceremony outside the state of Israel — a ceremony that is recognized as a valid marriage upon their return to Israel. They refuse to start their life together as a couple in the dark rooms of the religious councils. A visit to the offices of the Tel Aviv rabbinate illustrates the deep gap between the rabbis dealing with marriage registration and the young people who wish to get married. They seem to represent two alien worlds, far removed from each other. Except for the common Hebrew language, they have virtually nothing in common.

One may wonder how it could be that modern Israel has found itself caught in such a trap — unmatched in the Western world. The truth is that the institution of marriage in Israel was established even before the establishment of the state. It forms part of a series of understandings reached by the leaders of the Jewish pre-state community and the heads of the ultra-Orthodox community. Former Primer Minister David Ben-Gurion, who served at the time as chairman of the Jewish Agency Executive, sought to enlist in advance the support of all Jewish sectors for the establishment of the State of Israel.

To this end, Ben-Gurion met with the leaders of the ultra-Orthodox community on June 19, 1947. The United Nations Special Committee on Palestine was visiting Palestine at the time and gathering testimony on the notion of the division of Mandatory Palestine. The ultra-Orthodox Jewish community fiercely opposed the establishment of the state of Israel, considering it a challenge to religion and fearing that it would undermine the faith in God as the supreme power and ultimate authority for the Jewish people. The establishment of a secular state and governmental institutions threatened to upset the balance. For the first time, after 2,000 years of exile, the sovereignty of the state was about to prevail over the dominion of Jewish law.

At said meeting, Ben-Gurion suggested that the ultra-Orthodox join government institutions to preserve the Jewish nature of the state in the making. The ultra-Orthodox, for their part, came up with four key requirements: the Sabbath be declared the weekly day of rest; the Jewish dietary laws of kashrut be maintained in the kitchens of all governmental institutions; full autonomy be granted to all educational tracks, specifically, the ultra-Orthodox education system; and last but not least — the highly significant clause of personal status laws. Ben-Gurion acceded to the demand of the ultra-Orthodox that the authority in matters of marriage and divorce be invested in the hands of the Chief Rabbinate of Israel.

An agreement to that effect was indeed signed, which became known in time as “the status quo letter." Nothing has changed since, and all attempts to institutionalize civil marriage have failed in the face of the firm and determined opposition presented by the ultra-Orthodox parties.

The ultra-Orthodox are convinced that any concession, even if only minimal, on the issue of marriage could bring down the status quo altogether, and lead to the elimination of the Jewish identity of the state of Israel. “If civil marriage is made legitimate, then within one generation, and certainly within a few generations, we are bound to become two peoples or even more, as those whose parents were married according to Jewish law would be barred from marrying those whose parents were not married according to the Jewish law,” former director-general of the rabbinical court system, Rabbi Eli Ben-Dahan, pointed out in an article published by the Israel Democracy Institute two years ago.

The recent parliamentary elections held last January have strengthened the public demand for a change in the marriage law. Yesh Atid leader Yair Lapid assured his voters that the issue of civil marriage was at the top of his agenda. As a matter of fact, he himself organized and managed such ceremonies before being elected to the Knesset. However, today, almost a year following the elections, there seems to be no sign of change and no indication that the paper signed in 1947 may be amended — this notwithstanding the present composition of the Knesset, the most secular in decades in the history of the Israeli parliament.

“I am not expecting a revolution in the marriage arrangements in Israel,” said Esti, who is about to finish law school. “As long as the rabbis and the ultra-Orthodox world believe that this is the way to preserve the existence of the Jewish people, I am sorry to say, but I don’t see any chance of a change in the offing.”