Living in a state which offers no civil marriage, most young Israelis opt for the religious ceremony, mainly because families cherish tradition more than the rabbis who officiate. 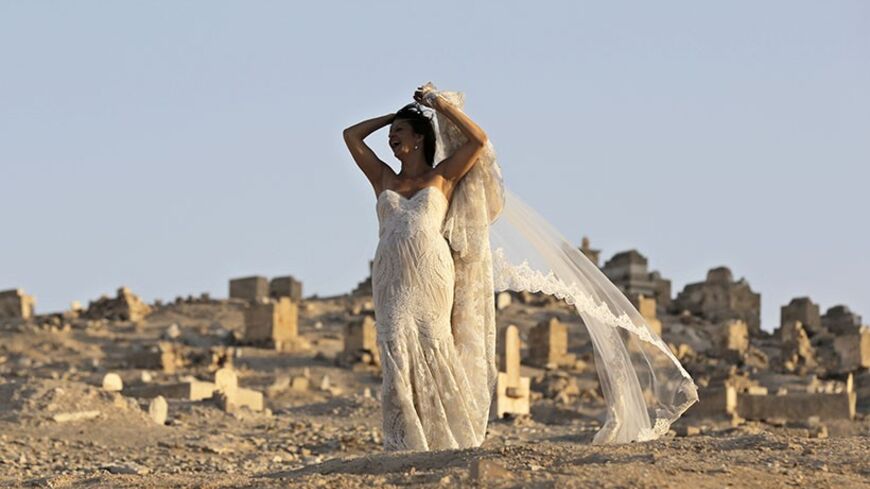 "You are hereby consecrated to me with this [ring], according to the law of Moses and Israel.” (from the Jewish wedding ceremony)

When they reach their big day as bride and groom, most Jewish Israelis still marry under a rabbi, under proper Jewish law. While Israeli law does not allow civil marriages, Israel’s Central Bureau of Statistics (CBS) shows that only 1,128 Jewish couples took the trouble to go abroad in 2011 to marry in a civil ceremony. By contrast, 38,936 Jewish couples married that same year in the rabbinate.

In a social survey taken by the CBS in 2009, only 72.3% of 20- to 24-year-olds stated that it was very important to them that within their family, the marriage ceremony be conducted by a rabbi, and only 38.5% of secular Jews declared this. Nevertheless, as aforesaid, most Israelis exhibit conservatism: While they do not observe the Sabbath or keep kosher or observe the commandments or fast on Yom Kippur — when they get married, they decide to stick to tradition and enact the Jewish hupa ceremony as prescribed by Jewish law.

“I grew up in a totally secular household,” says Tal (full name withheld), a 27-year-old man who lives in the center of Israel and is in a long-term relationship. “But I will marry in a religious framework. I am not a big rebel type, I won’t seek a civil process and go against religion. That is what is accepted, that is what everyone does and that is what I will do.”

“Two days ago, I met with youths from the Russian immigration,” says Mickey Gitzin, executive director of the Be Free Israel movement, which promotes civil marriage in Israel. “They say that it seems crazy to them, that a person who eats bread on Passover or barbecues on Yom Kippur will bring in a rabbi on his wedding day. Nevertheless, it seems natural to all the Israelis that a rabbi should marry them, because ‘that’s what will make me really married.’ Only an insignificant number of couples marry outside the rabbinate. The Israeli concept of a family involves a wedding, period. That goes beyond the usual categories of liberals and conservatives. The idea of having children without a wedding is very marginal; it is viewed like not going to the army.”

The reasons for this perception are complex. First of all, the religious method is so entrenched in the Israeli existence that few young Israelis even investigate other options, such as civil marriages abroad or common-law relationships (cohabitation).

Despite that several Knesset members promote civil marriage, the choice of civil marriage is still perceived as extreme, or “rebellious” in Tal’s words.

Gitzin explains, “Legally, there is no real difference in Israel between common-law unions without the stamp of the rabbinate, and weddings in the rabbinate. But many young people are not aware of this and think that if they don’t register in the Ministry of the Interior as a married couple, something that requires a religious wedding in Israel, they will not receive the benefits they deserve.”

Gitzin, who regularly organizes meetings on the subject with groups of young people ages 20-and-over from all across the country, adds that even those who are aware of other options and know that their rights won’t be affected, prefer to marry in the rabbinate. “It [marriage] is making a social statement,” he said, “and if your statement is not accepted by society, then it’s not worth a thing. So on one hand the youths view the rabbinate as one of the most corrupt apparatuses in the country, but on the other hand everyone goes through it. Therefore, our struggle to promote civil marriage is viewed as marginal, most of us simply go with the flow. Civil marriage is perceived as something needed by Russians or LGBT (lesbian, gay, bisexual and transgender).”

Inbar, 29, from the city of Holon got married in a Jewish wedding, even though she was closely familiar with other options. “The main reason is because of my family. They respect tradition and it was important to them that I marry in the rabbinate,” she explains. “Also, there is much pressure before the wedding and so much to organize, that it’s very convenient that someone else is in charge of organizing the ceremony itself for you. It’s an easy way out instead of starting to think about an alternative ceremony that you have to invent and create. But a month after the wedding I already started to regret that I chose the easy road, instead of fighting for what I believe in. I gave in to convention, and instead of undergoing a ceremony that fits my belief-system, I did what my family wanted.”

Israeli conservatism with regard to the wedding ceremony, whether because of convenience or taking into account a family’s values, ostensibly casts doubt on the very need for civil marriage in Israel. Gitzin does not agree with this conclusion. “A tremendous percentage of the complaints we receive, are connected to weddings. The young people want change,” he said.

While the attitude of secular conservatism with regard to the institution of marriage has not changed substantively since the establishment of the state in 1948, a big change has taken place with regard to the age of marriage. According to the CBT data published in 2013, the median ages for Jewish female and male singles in 1960 was 21.7 and 25.7 respectively, while by 2011 it had climbed to 26.3 for women and 28.4 for men.

The rise in the age of marriage also applies so it seems to the national-religious society. Ari Engelberg of the Hebrew University’s sociology department wrote his doctoral dissertation on “Religious Zionism and the ‘problem’ of extended bachelorhood.” Engelberg maintains that recent years have seen the development of the extended bachelorhood model among young single men and women of the national-religious sector.

“The religious youth look around and see the ultra-Orthodox getting married at a young age, and their worldview aspires to that,” he explains. “But they also look at the other side and see how the secular society sanctifies dating and falling in love, not just getting married for the sake of being a couple, and they aspire for that too.”

Engelberg argues that there is a significant rise in the age of marriage within religious society as well. He says that this testifies to a dramatic change in this sector. One reason amongst others is that premarital relations are not accepted in religious, as opposed to secular, society.

“It is truly a socially sensitive issue,” said Engelberg. “Therefore, many single religious bachelors undergo a crisis at the age of 30, leading to an interesting phenomenon that worries the religious society a great deal. The longer the single period last, the more that single males move toward the secular culture. The import of this is that being single in the young religious society is very serious matter, becoming an element which weakens religious discipline.”

Engelberg, who has interviewed numerous religious male and female singles, said they change their worldview significantly due to their single status. “Young religious women feel pressured to marry around age 20-21. When it doesn’t happen, ostensibly they have ‘failed,’ but then they head for other horizons such as the university, a move to another city. Members of the secular society talk about getting married in their late 20s, and [religious women] are influenced by that. It reduces their stress.”