Tzohar rabbis offer an alternative to restaurants and hotels that want a kosher certification but are fed up with the Chief Rabbinate. 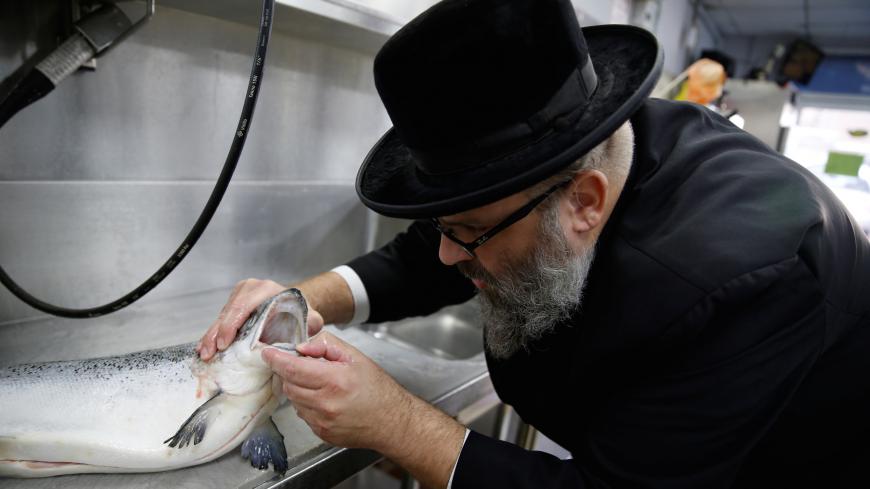 Kosher inspector Aaron Wulkan examines a fish in the kitchen of a catering business to check that it is kosher, ensuring that the food is stored and prepared according to Jewish regulations and customs, Bat Yam, Israel, Oct. 31, 2016. - REUTERS/Baz Ratner

The Tzohar Rabbinical Organization announced Feb. 26 the launch of an independent kosher food certification system for restaurants and hotels. The group stated that it did not intend to replace the Chief Rabbinate’s kosher oversight body or to compete with it, but to improve religious services to restaurateurs and also to clients.

This move generated angry reactions by the Chief Rabbinate, but it was rather surprising to see that the most vocal opposition to Tzohar’s new kosher (kashrut) certification initiative came from its own camp. On March 6, a group of rabbis long associated with Tzohar signed a petition opposing the initiative and calling for a boycott. In a conversation with Al-Monitor, Rabbi Rafi Feuerstein, a leader of Tzohar, said that those rabbis opposed to the initiative identify with the ultra-Orthodox nationalist sector. In other words, their positions concerning religious law are closer to those of the ultra-Orthodox.

Tzohar was founded by religious nationalist rabbis after the assassination of Prime Minister Yitzhak Rabin in 1995 by a far-right religious person, as a result of the rift that emerged in Israeli society at the time. One of the group’s main objectives was to make religious services in Israel more accessible and friendly to the wider public, in contrast to existing religious institutions, particularly the Chief Rabbinate.

It was this loophole opened by the Supreme Court that the Tzohar rabbis used. They were already experienced in breaking the Chief Rabbinate’s monopoly in other areas, particularly marriage. Over the last few years, Tzohar increased the number of religious services it provides as an alternative to the Chief Rabbinate. This includes the option of having rabbis from Tzohar perform weddings. (The Israeli Rabbinate recognizes these marriages as legitimate after the ceremony is completed.)

According to Feuerstein, ever since the group began to marry couples in Israel, there has been a growing demand for rabbis affiliated with the movement to perform weddings instead of the Rabbinate. This is because of their friendly approach and the assistance they provide in registering the marriage with the Chief Rabbinate and the Ministry of the Interior. Figures provided by the group show that in 2017, some 5,000 couples were married by Tzohar rabbis. This accounts for 20% of all Jewish couples married in Israel.

Kashrut is another issue that impacts the lives of all Israelis. Most restaurants and businesses dealing with food must have kashrut certification in order to serve the religious public. Similarly, most of the public described as “traditional” prefers to purchase food at stores with kashrut certification. The Chief Rabbinate’s monopoly on kashrut has resulted in such extensive corruption that the State Comptroller investigated the matter. The result of his investigation was a particularly scathing report on the issue in May 2017.

In announcing the new kashrut initiative, Tzohar released a set and uniform price list for food stands and restaurants. This contrasts sharply with prices that change from one city to the next under Rabbinate supervision. Tzohar also rejected the need for businesses to employ kashrut supervisors directly. According to Feuerstein, in the two weeks since the initiative was first announced, over 40 restaurants and businesses with no kashrut supervision approached Tzohar, asking to join the new initiative. “This was exactly what we intended. We wanted to increase kashrut in Israel and silence the claims of rabbis opposed to the initiative,” he said.

The American fast food chain McDonald’s operates 185 restaurants in Israel, over 50 of which are kosher. Restaurateurs estimate that the chain spends about 1.5 million shekels ($435,000) a year just to obtain kashrut certification. This is an onerous financial burden, particularly for restaurants that are not part of big chains. They must also employ kashrut supervisors, whose salaries are added to each restaurant’s expenditures. Frequently, the restauranteurs are also expected to purchase food from more expensive suppliers, at the demand of the kashrut supervisor. They do all this to obtain a kashrut certificate, since no religious or traditional customers will walk in if they don’t have one.

Tzohar’s initiative is expected to cut these costs significantly. So, for instance, each kosher McDonald’s branch that switches to Tzohar supervision will pay just 20,000 shekels ($5,800) per year. This comes to 1 million shekels ($290,000) for all the kosher branches, a savings of half a million shekels per year for the McDonald’s chain.

Shai Berman, the general manager of the Restaurants and Bars Association, told Al-Monitor that this is an important step forward for the Israeli economy. “This alternative will result in a drop in kashrut costs and also in food costs,” he said. “We have reached the end of an era in which we were afraid of a single body that imposed its authority on us and forced us to dance to its own tune.”

The situation in hotels is even more problematic, since their kashrut supervisors expect to receive full room and board for themselves and their families on Sabbaths and holidays. This occurs regularly, even if the hotel is booked to capacity. The cost can soar to hundreds of thousands of shekels per year. As a result, the general manager of the Israel Hotels Association called on hotel managers across Israel to switch to Tzohar supervision. “Tzohar’s kashrut is just as good. It maintains the same quality, and it is a lot cheaper than the cost of regular kashrut certification from the Chief Rabbinate,” he wrote them. The Chief Rabbinate responded with a letter warning hotel managers that they will take legal action against any hotel that makes the switch.

According to Feuerstein, criticism of Tzohar’s kashrut initiative is to be expected and is relatively minor. Many rabbis affiliated with the religious-Zionist sector do not oppose the initiative. So, for instance, Rabbi Eliezer Melamed, who has a reputation for his stringent rulings, believes that the rabbis of Tzohar may establish a kashrut organization for the sake of all Jews, so as to cause more Jews to observe the laws of kashrut.

Ultimately, the struggle extends far beyond issues of kashrut. With all the various services it provides, Tzohar meets the needs of those Israelis who have not turned their back on religion and tradition, but who want their religious services to be accessible and friendly. The Chief Rabbinate is now fighting to maintain its status, even though its very conservatism, dictated by the ultra-Orthodox groups that control it, are alienating the general public.