New Religious Affairs Minister Matan Kahana is not afraid of the ultra-Orthodox parties; he advances an unprecedented reform on kosher certification. 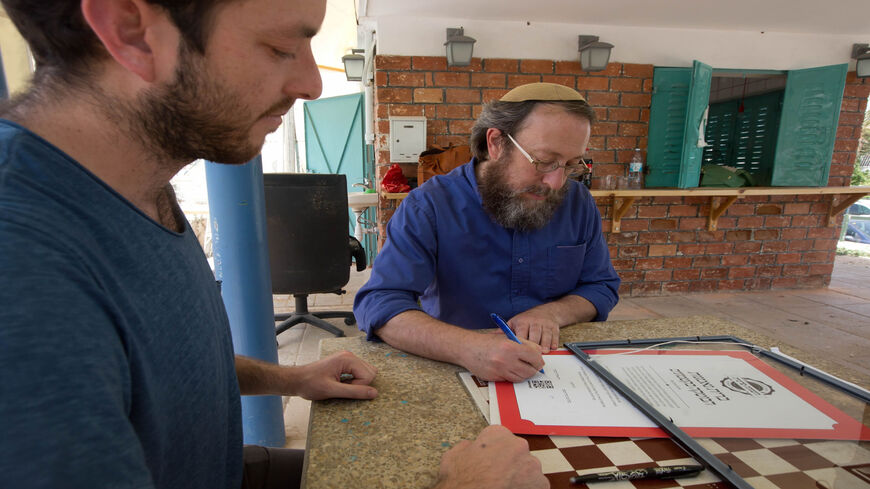 Rabi Aaron Leibowitz (C), the founder of Hashgach Pratit — Hebrew for private supervision — which checks if restaurants abide by kosher practices, signs a certificate for the new bar Eitan Steinberg in the center of Jerusalem, June 8, 2016. - Menahem Kahana/AFP via Getty Images

Israel’s new government is often called “the government of change.” Admittedly, the ideological differences between its members have resulted in slow, often plodding change. On the other hand, when it comes to matters of religion and state, the changes being introduced could run deep. The main reason for this is the absence of any ultra-Orthodox parties in the coalition. These parties have a long track record of interfering with any reforms or changes on issues like conversion, opening the economy on the Sabbath, and so on. Finance Minister Avigdor Liberman has, in fact, taken steps to incorporate ultra-Orthodox men in the workforce.

The new Minister of Religious Affairs Matan Kahana, a former fighter pilot, is a religious man and a member of Prime Minister Naftali Bennett’s Yamina party, which tries to give voice to the moderate wing of the religious Zionist movement. One month after assuming office, Kahana introduced a reform to rules concerning kosher certification services for businesses, which had been dominated exclusively by the Chief Rabbinate until now.

The problem is that the Chief Rabbinate’s monopoly over kosher certification has tarnished the kosher certification process, opening it up to inefficiency, a bloated bureaucracy and even claims over corruption. As such, it has been criticized repeatedly by the State Comptroller. Perhaps the worst case of this was the State Comptroller’s Report of 2017, which called for a thorough investigation of the system.

The plan proposed by Kahana is a response to this criticism, and in particular, a reaction to a 2017 Supreme Court ruling that the economic interdependence of kosher supervisors and their clients supervision must be severed. The ruling was based on the finding that restaurants and businesses paying kosher supervisors opened the way in some cases to extortion and corruption. Kahana’s plan would open the kosher certification market to competition. Private groups offering certification would then be required to meet the religious criteria established by the Chief Rabbinate in order to grant their certification.

Private kosher certification firms would be responsible for the hiring and supervision of kosher supervisors. They would then publicize which of several religious standards they meet, though all such standards must be acceptable to the Chief Rabbinate. The Chief Rabbinate would then create a supreme supervisory board to oversee private kosher certifiers and ensure that they meet the halachic standards they chose.

As implied above, kosher certifiers would also be able to choose a less stringent standard than that adopted today by the Chief Rabbinate, as long as they receive the approval of three local rabbis. This is intended to deal with certain issues where the Rabbinate is particularly strict, such as restaurants whose food is kosher but that are open on the Sabbath. As of now, such restaurants do not receive certification from the Chief Rabbinate. Under the new arrangement, they can receive an official kosher certificate that is slightly different from the normal certificate displayed by restaurants.

The bottom line is that instead of being the operator of a system of kosher supervision and certification, the Chief Rabbinate would become a regulating body that oversees private organizations handling kosher certification. It is, in effect, an attempt to private these services.

There are already several groups in Israel that offer kosher certification. One of the most popular is affiliated with the Tzohar rabbinical organization. They created a more lenient certification system, which is popular among restaurant owners.

The country’s ultra-Orthodox parties added their voice to this protest. Knesset member Moshe Gafni told a meeting of the ultra-Orthodox Yahadut HaTorah faction, “Liberman and Kahana want to make Israel like any other country in the world. They want to erase any spark of Judaism and prevent Jewish citizens from eating kosher food.”

Knesset member Yakov Litzman added, “The campaign of destruction being waged by Liberman, Bennett, Lapid and Sa’ar against the traditions of Israel, the world of the Torah and against Judaism itself continues full steam ahead. The ‘kosher certification revolution’ is a mortal blow to millions of ultra-Orthodox, religious and traditional citizens who want to eat kosher food in accordance with Jewish law.”

Kahana responded during a July 21 Knesset debate, saying, “What are you so afraid of? Anyone with eyes in his head can see that our kosher certification system is sick, very sick, and that it needs to be reorganized. My plan would fix it by opening it up to competition, while remaining subject to regulation by the Chief Rabbinate, and under the Chief Rabbinate’s supervision, just like it is overseas. As a result of this plan, people — more people — will eat kosher food, and the certification will be more kosher.”

Kahana received the support of human rights organizations, focusing on issues of religion and state. CEO of Israel Hofsheet (Be Free Israel) Uri Keidar said, “We welcome any move that would reduce the presence of the Chief Rabbinate in the lives of people in general and business owners in particular. Israelis have been fed up with the Chief Rabbinate for a very long time. It is good to see the government siding with the public. Hopefully, we will see the same thing happening in issues revolving around marriage and conversion.”

That is exactly what concerns the ultra-Orthodox parties. They are worried that this government will not stop with kosher certification and begin interfering with other issues concerning religion and state. Back in 2013-15, when they were not part of the coalition, the government introduced serious reforms, including the reduction of budget allocations to ultra-Orthodox yeshiva students. These cuts were eventually repealed, when that government fell. But Bennett is a religious moderate, whose coalition partners include Yesh Atid leader and Foreign Minister Yair Lapid, who was originally behind those reforms, and Liberman and the left-wing Meretz party, both of whom ran on a platform opposing religious coercion. This new “government of change” can be expected to continue introducing reforms as long as the ultra-Orthodox parties are not of power.