Why Israel must end chief rabbi’s monopoly on Judaism

The State of Israel must put a stop to the monopoly held by the Chief Rabbi on deciding who is Jewish, who can marry who and who can immigrate to the country. 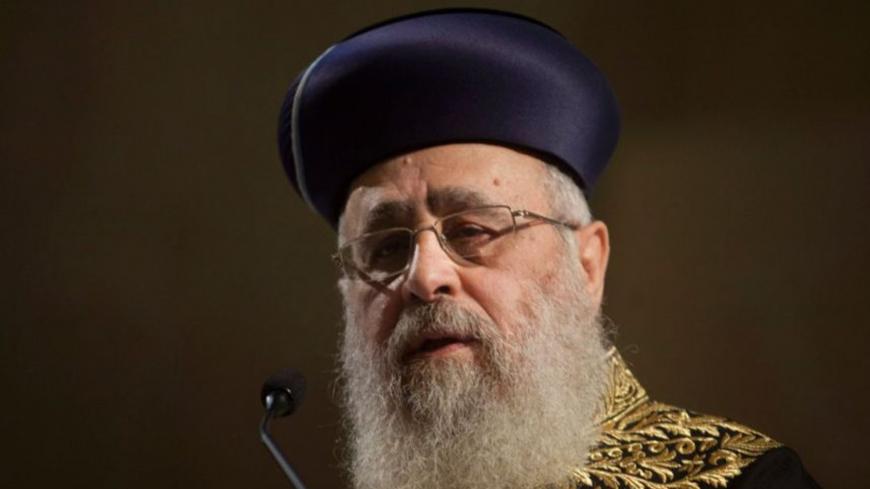 Sephardic Chief Rabbi Yitzhak Yosef, who has caused upset with his comments about immigrants from the former Soviet Union. Posted March 28, 2016.

Israel has been in an uproar for several days now, after remarks made by Sephardic Chief Rabbi Yitzhak Yosef at a meeting with rabbis about to be sent as emissaries to the Diaspora. While his comments were made off the record, one of the rabbis who was in attendance was so startled by them that he decided to report the remarks to the media on Jan. 7.

As was the custom with his late father, Rabbi Ovadia Yosef, Yitzhak Yosef also addressed his audience as if he was some ultra-Orthodox Archie Bunker, speaking his mind at his family’s Sabbath table. His main message was his “discovery” of a conspiracy through which the secular establishment brought masses of immigrants from the former Soviet Union to Israel, so that their votes would cancel out the votes of the religious community. As he said in his own rambling language, “There are many, many non-Jews here, some of them communists, hostile to religion, haters of religion. They are not Jews at all, gentiles. Then they vote for parties that incite against the ultra-Orthodox and against religion.” He added that some of these immigrants, “go to church every Sunday. They go to the monastery.”

Yosef spoke angrily about the “Grandchild Clause” of the Law of Return, which allows people, who are non-Jews according to strict Jewish law, to immigrate to Israel and gain citizenship. This amendment was added to the Law of Return in 1970 following a Supreme Court ruling, which determined that since the Law of Return does not define who is to be considered a Jew, the children of women who are not Jewish (born to a Jewish father) can also be recognized as Jews. (In contrast, traditional Jewish law determines one’s status as a Jew on the basis of matrilineal descent.) The National Religious Party reacted quickly and was able to amend the Law of Return to read that a Jew is “anyone who was born to a Jewish mother or converted,” but as a compromise with the secular parties, it also determined that the law would include the “child or grandchild of a Jew and the spouse of the child or grandchild of a Jew.” This was done so as not to tear apart intermarried families. The chief rabbi considers this compromise to be “the mother of all sin,” because it has been used to grant Israeli citizenship to people who are not Jews according to his own exacting definition.

Yosef also warned his audience not to get involved with conversions overseas, telling them that even conversions conducted by the very system he heads “are sometimes done by people who are not religious themselves, so that their conversions are not valid.” He wasn’t too complimentary of the Supreme Court either, speaking clearly and succinctly, when he said, “Who is the Supreme Court? For the most part, the Supreme Court is opposed to religion!”

As a state employee, a rabbi is not allowed to address political issues. Nevertheless, Yosef still considers himself to be the Hacham Bashi — the title used for the leader of the Jewish community in the Ottoman period — and can therefore say whatever he wants. Only God knows what his flock of followers really think as they pay rapt attention to his outrageous talks.

Inevitably, as soon as the chief rabbi’s remarks were made public, politicians began to condemn them and even make demands of the chief rabbi himself. Some insisted that he apologizes; others demanded that he steps down. A few even called for the rabbi to be investigated for incitement. Prime Minister Benjamin Netanyahu spoke proudly of the contributions of Jews from the former Soviet Union to Israeli society, while immigrants gave interviews about the problems that they faced in their own absorption process because their status was challenged. Inevitably, they also condemned the chief rabbi’s remarks. In contrast, he was defended by former convict and current Interior Minister Aryeh Deri. He claimed that the later Prime Minister Yitzhak Rabin admitted to him that the reason behind the mass immigration of Jews from the former Soviet Union was to counterbalance the ultra-Orthodox vote for the Knesset.

It looks like Yosef was startled by all the commotion surrounding him, so he made a few brief remarks about the importance of Jews immigrating to Israel. Nevertheless, these remarks were nothing like an apologize. He certainly didn’t take back his earlier comments.

The problem is that none of these politicians’ demands will have any real significance. Nothing would change, even if the chief rabbi complied, in whole or in part. Having seen what he said when his guard was down, we can certainly determine that this is really what he thinks. It reflects his opinion about the legal system, and it reflects what he thinks about conversions conducted under his oversight. Most of all, it reflects what he really feels about the hundreds of thousands of people from immigrant families, who arrived in Israel and do not feel like they need a rabbi to convert them from being heretical Christians into heretical Jews. Nor do they want to deceive the people converting them by promising to keep the commandments and send their children to religious schools.

The solution for anyone who got chills from the recorded and videotaped comments of the chief rabbi is to put an end to the existing system, which has been in place since the earliest days of the British Mandate. Anyone who considers Yosef and his colleagues as their leaders and is willing to accept their rulings should do so, while letting everyone else live their lives without any involvement of religion whatsoever.

In many ways, the British continued the system put in place during the Ottoman Empire. The Ottomans interacted with the religious communities under their rule, respected anyone who headed them and engaged them in dialogue about affairs relevant to their respective communities. At the head of the tiny Jewish community in the Land of Israel was the Hacham Bashi. He was both a chief rabbi of sorts and a political leader. The original intention of the British was to keep the institution in place during Mandate rule. Upon consulting with the leaders of the Jewish settlement in Palestine at the time, it was decided — after debating many other options — to elect two chief rabbis, one Ashkenazi and the other Sephardic. Furthermore, it was decided that the electing body would also include secular Jews. The idea was that these two officials would have a monopoly over the religious affairs of the Jews in the country, but that this would only be a temporary arrangement. The original intention was that this working agreement would be replaced with a permanent arrangement at some later date. Next year will mark the 100th anniversary of the temporary agreement.

These recent comments by the Sephardic chief rabbi and the approaching centennial of the arrangement that led to the creation of the Chief Rabbinate should be grounds enough to end Israelis’ dependency on the Chief Rabbinate for all matters relating to who is a Jew, as well as marriage and divorce.

As far as I am concerned, Yosef can continue to spout his nonsense as long as I am not dependent on him. As in any other democracy everywhere else in the world, the state should be responsible for the personal status of individuals, based on its own decisions. It is the government that should decide who can join our community, who can become an Israeli citizen, and it should enable everyone the right of marriage and divorce. If it decides to grant its approval to marriages and divorces conducted by the Chief Rabbinate or parallel Muslim and Christian institutions, that would be fine too, as long as they are not granted a monopoly. Yosef would continue to decide who is a Jew, based on his own criteria. He can determine who is a "mamzer" — a bastard by religious definition, who may not marry into the Jewish community — and which women are married. He can even take a salary from the state. What he should not be allowed to do, however, is to demand that the rest of the country follow his rulings. If this change is made, that would be enough for me.