In maligning immigrants from the former Soviet Union, Chief Rabbi Yitzhak Yosef ignores that contrary to his ultra-Orthodox congregants, they contribute to Israel's economy and risk their lives serving in the military. 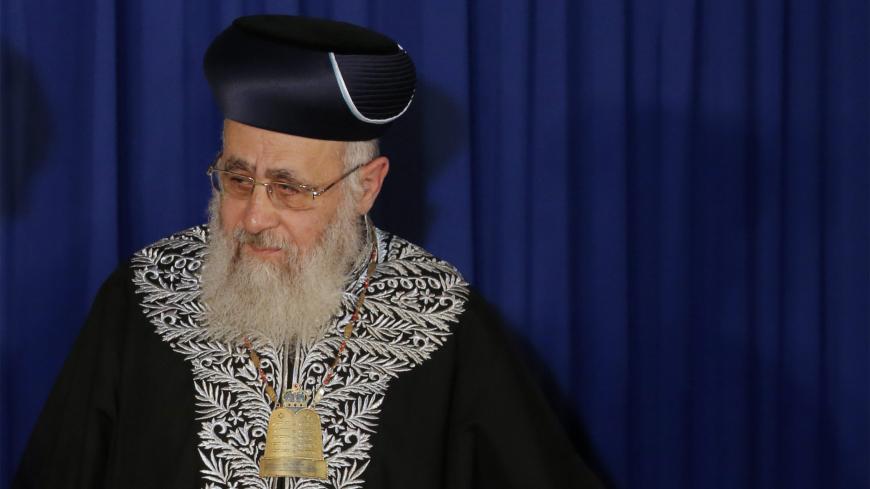 Israel’s political arena has been turned in recent months into a slaughterhouse of democracy’s most sacred cows. Prime Minister Benjamin Netanyahu is busy eroding the foundations of the legal system and the media. Education Minister Rabbi Rafi Peretz is engaged in slinging poison arrows into the hearts of gay youths. Yisrael Beitenu Chair Avigdor Liberman is spewing hatred against elected Arab officials, who represent 20% of the country’s citizens. The most recent addition to this frenzied political slaughter, kosher, of course, is an official religious cleric.

In a recently exposed rant, Yitzhak Yosef, Israel’s chief Sephardic rabbi, purported to be the embodiment of apolitical brotherhood and peace, turned an entire community of Israeli citizens into enemies of the Jewish people. “They were brought here to provide a counter-weight to the ultra-Orthodox,” the senior rabbi said of immigrants from the former Soviet Union. “Then they vote for parties that incite against the ultra-Orthodox and religion.” Some, heaven help us, even attend church every Sunday, complained the leading religious authority.

Yosef, a civil servant whose salary is paid by Israeli taxpayers, has expressed similar and worse drivel in the past, as have other rabbis, but the timing made front-page headlines on Jan. 7 and forced politicians and pundits to respond.

The insult hurled by the rabbi at a sizeable constituency — hundreds of thousands of people who were deemed eligible for immigration to Israel under the Law of Return but whom the Orthodox establishment does not recognize as Jews — elicited a half-hearted condemnation by Netanyahu. After all, the Likud party’s candidate for prime minister cannot afford to alienate his “natural partners” in the ultra-Orthodox parties at this critical time, less than two months before elections. All he mustered was a generalized statement that didn't even identify the culprit. “This is an outrageous statement,” Netanyahu tweeted. “The immigration of people from the former Soviet Union is a blessing to the State of Israel and the Jewish people.” A fitting addition to the last sentence would go something like “unlike our brothers, graduates of ultra-Orthodox yeshivas, who evade the draft and contribute nothing to the national economy or the honor of the Jewish people.”

Nonetheless, without intending to, Rabbi Yosef raised the issue of the 2018 Nationality Law, of which Netanyahu was a leading proponent. According to that controversial law, the State of Israel does not belong to those “non-Jews” to whose defense Netanyahu came. Although a “blessing” for the state, they are nonetheless not part of the state, which the law enshrines as belonging exclusively to the Jewish people.

In the 18th century, the American colonies fighting for independence from their British rulers laid down the principle of “no taxation without representation,” alternatively, “taxation without representation is tyranny.” Today, Israel’s chief rabbi and his political emissaries enjoy Knesset representation without paying the dearest tax of all — life itself. They do not serve in the Israel Defense Forces (IDF), and thus do not endanger their lives for the sake of the country. While using study of the Torah as an excuse to avoid military service, they have the gall to question the rights of the men and women from the former Soviet Union, the so-called non-Jews, who serve in the military and risk their lives for the sake of others, including those safely ensconced in yeshivas.

Responding to the September 2017 Supreme Court ruling striking down the exemption of ultra-Orthodox Israelis from mandatory military service, Aryeh Deri, chair of the ultra-Orthodox Sephardic Shas, said, “Torah studies kept us together for generations in the face of persecution and edicts.” Deri announced that the top court’s ruling notwithstanding, yeshiva students would continue to dedicate themselves to religious study and “defend the denizens of the land” with the God-given rights they earn as a result. He was right. Between 2015 and 2018, the number of yeshiva students rose 27%, probably due to increased state stipends paid to yeshiva students. In 2018, Shas spiritual leader Rabbi Shalom Cohen scorned plans to cut the budgets of yeshivas whose students refused to enlist. “What, do we live according to budgets from these goyim?” he complained. Indeed, in the eyes of those rabbis, all of us heathens who violate the sanctity of the Sabbath and so-called family purity laws are not considered Jews.

Whereas some 5,000 “non-Jews” serve at any given time in the IDF, according to a January 2018 report in Yisrael Hayom, no more than 1,300 ultra-Orthodox men agreed to serve in 2017. At a July 2015 Knesset debate, Merav Michaeli (Labor) had said the percentage of immigrants from the former Soviet Union, both those born there or whose parents were, accounted for 20% of IDF troops. These “non-Jews” are not, however, entitled to burial alongside their “Jewish” brothers in arms. Michaeli proposed legislation at the time annulling the regulations mandating a distance of some six and a half feet between the grave of a Jewish soldier and that of a non-Jewish soldier. Michaeli’s proposal was rejected by a majority of government coalition members.

Liberman, of course, did not miss the golden opportunity provided by the chief rabbi to storm the citadels of the ultra-Orthodox. The leader of the party that advocates the transfer of Israeli Arab citizens to Arab lands accused the chief rabbi (rightly so) of racism. The politician who specializes in incitement against a significant part of Israeli society complained about the “fatal blow to the delicate fabric of Israeli society.” Talk about the pot calling the kettle black.