Rabbi Ovadia Yosef, who died on Oct. 7, led a social revolution for equality and integration that is yet to achieve its goals. 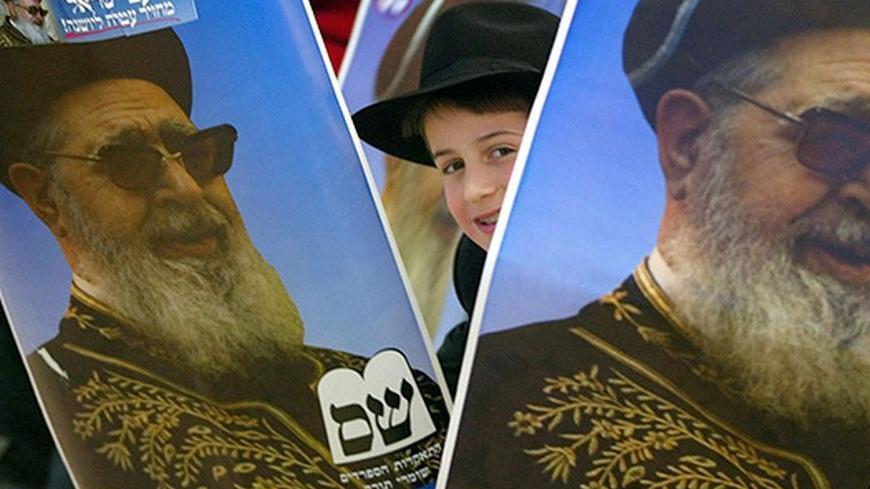 On the evening of Oct. 7, more than 800,000 people accompanied Rabbi Ovadia Yosef on his final journey. Jerusalem took on the somber hue of black, the color of the suits worn by the ultra-Orthodox Jewish masses who inundated the city and cut it off from the outside world.

A little more than 6 million Jews (out of 8 million residents) live in Israel today. This means that more than a tenth of them were in Jerusalem for the funeral procession. If one translates this into American dimensions, the number is equivalent to 40 million human beings. The television stations broadcast live footage around the clock, from the time of the rabbi’s passing in the afternoon until after midnight, the hour when his body reached its final resting place.

The distance of the funeral procession — from the Porat Yosef Yeshiva, where the rabbi studied in his youth, to the cemetery — was less than 2 kilometers [1.2 miles], but required more than four difficult hours to travel. Hordes of people thronged the vehicle transporting the body and then afterwards crowded the litter bearing the remains, trying to touch the revered personage one last time. People crowded onto rooftops, on car hoods, on cranes and on treetops to catch a glimpse of the man they viewed as their biological, spiritual and physical father for the last time. It was the largest event in modern Israel. The question is, does it symbolize a change in the face of modern Israel or its denotation.

The spectacle reminded me of the funeral of King Hassan II in Morocco in 1999. Millions of Moroccans, simple folk as well as the rich, crowded the length of the funeral procession in Rabat, the capital. At a certain point, people burst through the police barricades and flooded the city in deep, authentic grief accompanied by howling cries, tears and other heart-breaking expressions of sorrow.

Rabbi Ovadia Yosef was not a king in the secular meaning of the word, but for millions of Israelis, he was much more than a king. He was God’s messenger, the Lord’s emissary on Earth. He was a prophet, a leader, a father, a guide, an arbiter of Jewish law and the most outstanding Jewish religious figure of his generation. He lifted the pride and self-respect of Israelis from Mizrahi [Oriental] extraction who had been humiliated and oppressed by the Ashkenazi [Eastern European] Israeli establishment in the early years of the state. If we try to compare him to similar leaders in the world, Rabbi Ovadia is a kind of combination of Martin Luther King Jr., Pope Francis, Muhammad Ali and the Messiah.

The Israel of 2013 is split into at least identifiable two groups. Besides the hundreds of thousands who attended the funeral, most of them clothed in black suits and wearing traditional Lithuanian Borsalino hats, another million or two (at least) mourned in their homes. It wasn't only ultra-Orthodox Jews who mourned Ovadia’s passing. Traditional Jews, "light religious," national-religious and even secular Jews mourned him as well. On the other side are all the rest, still the majority (albeit shrinking) in Israel. These viewed the spectacle with anthropological amazement (at best) or shock and disgust (at worst). The funeral reminded many of them of similar events in the Arab world, such as at the Muqataa in Ramallah or at Tahrir Square in Cairo.

Today, more than 65 years since the establishment of the State of Israel, the “ethnic demon” is still alive and kicking. Although a large percentage of today’s Israelis were born in the country and are the result of mixed marriages, between Ashkenazi men and Mizrahi women or vice versa, tensions remain between the ethnic groups. Discrimination still exists, emotions flare, and the wound still festers.

Israel was found on Zionism, which was largely a secular movement with some atheistic elements. It was founded in Europe, and from there it spread to Arab countries. The early wave of immigrants to Israel came from Europe and influenced the culture of the ensuing state and everything that denotes. In the 1950s, Israel looked like a blend of a Soviet kolkhoz [commune] and a Polish village with several Afro-Asiatic enclaves. These enclaves were mainly in impoverished backwaters and tended to concentrate the new waves of Oriental Jews, who had flourished for hundreds of years in Arab countries but came to Israel in great haste a short time after the establishment of the state.

For years these people were locked in ghettoes, slums and development towns and lacked any real influence on what transpired in the state, including its culture, music, literature, theater, politics, economy and government. Then along came Rabbi Ovadia Yosef, who served as Israel’s chief Sephardic rabbi. When his request to serve an additional term as chief rabbi was rejected, he founded Shas, the party of Orthodox Sephardim.

The establishment of a political party was viewed initially as revenge, but it quickly became clear that the decision was bigger than the sum of the motives that provoked it. The rest is history. At its height, Shas had 17 mandates (out of 120 seats in the Knesset), and today it still has 11. It is an important, stable and dominant political force that became a tremendous lever in government, an almost permanent balance-tipper in coalitions, a party that set the tone in many spheres and, in some of them, even dictated the rhythm.

The Rabbi Ovadia phenomenon is complicated and will be researched for years to come. In addition to the superlatives and praise associated with him (in this article as well), there is also complex criticism. In the last decade, he focused more on curses and invectives than rendering important religious judgments or engaging in outreach. He mocked the secular, cursed rival politicians, repeatedly made tactless remarks and even said that Israeli soldiers are killed because they don't observe the Torah and its commandments. Rabbi Ovadia became a political ax to grind, an efficient instrument for brainwashing the masses, a guru surrounded by amulets and whispers. Around him sprung up a byzantine court composed of innumerable lawbreakers and beset by bills of indictment that transformed Shas into the most corrupt party in Israeli history.

The rabbi’s real influence will not be measured until long after the dust has settled from his funeral, and Shas’ political fate becomes clear. The party is now in the opposition, separated from the government’s honey pots, and searching for its path and its next leader. Ovadia did not leave an heir since it is impossible to find someone of his stature. He was to the Torah [Judaism] what Albert Einstein was to physics.

Rabbi Ovadia’s venture into politics dimmed his incisiveness and devotion to Torah study. Toward the end of his days, he became hostage to political wheeler-dealers who used him to increase their influence, control more and more governmental functions and attract increasing streams of voters to flock to the ballot box with glowing eyes.

Now, all that is over. Rabbi Ovadia was known for his moderate rulings in Jewish law, such as enabling late prime minister Yitzhak Rabin to sign the Oslo Accords and authorizing the return of territories for peace. He permitted the release of wives of missing soldiers from the religious bonds of matrimony and allowed Ethiopian Jews to be brought to Israel. He also permitted converting soldiers whose Jewishness was cast in doubt. Ovadia was the man who broke down the ghetto walls, the great rebel against Lithuanian [ultra-Orthodox] zealousness. From the humble status of waiting upon the great Ashkenazi rabbis, Rabbi Ovadia became their greatest challenger.

Ovadia led an important social revolution in Israel but did not see its final victory. He left behind Shas leader Aryeh Deri on one side and former Shas leader Eli Yishai on the other, former chief rabbi Shlomo Amar here and Great Rabbi Hacham Shalom Cohen there — none of  whom really knows how to fill the giant shoes left behind. The battle between the right and left in Shas is at its height, and there is much consternation on all sides, not just in the party, but also in the state. The Israel of 2013 is splintered more than ever, with tension between the ultra-Orthodox and secular overflowing. The rise of Shas was a direct factor in the rise of the rival leader, Yesh Atid Chairman Yair Lapid, who raked in 19 mandates in the last elections.

The massive funeral in Jerusalem that took over prime-time media and Israelis' attention for half a day put on display the large community that Rabbi Ovadia succeeded in magnetizing. Now it appears that this enormous crowd is now, more than ever, a flock without a shepherd.