The Shas Party has an opportunity to rekindle its traditional moderate vision of Judaism, writes Mazal Mualem. 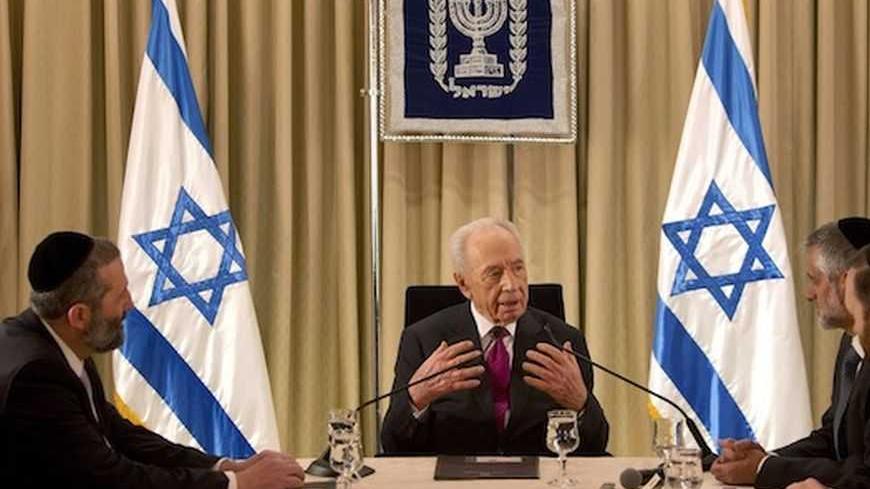 Each assessed that there was a very real possibility that Shas would not join the next government and arrogantly proclaimed that they were not afraid to join the opposition. However, their attempt to convey self-confidence in an environment fraught with uncertainty didn't hide the distress felt by Shas leadership, who since the elections have been terrified that they could be thrown into the opposition by their loyal ally, Prime Minister Benjamin Netanyahu.

The alliance being forged between Lapid and Naftali Bennett, leader of the HaBayit HaYehudi party — which is based on a shared goal of enacting a strict law for military service for ultra-Orthodox Jews — isn't the only front that poses a threat to Shas. The ultra-Orthodox Sephardi party now finds itself facing a catch-22, even with its ultra-Orthodox Ashkenazi sister, United Torah Judaism, which is categorically opposed to changing the status quo on military service.

Key figures in Shas admit that without United Torah Judaism's backing, the party will have difficulty demonstrating independence and reaching compromises on the matter of military service — even though much of the electorate that gave Shas its 11 Knesset seats in the recent election is comprised of traditional Jews who have served and currently serve in the Israeli Defense Forces (IDF).

The catch-22 here is the unavoidable result of the rethinking Shas has undergone over the past decade, by contrast to the ultra-Orthodox Ashkenazi leadership. The last elections, along with the binding ruling handed down by the Israeli High Court of Justice requiring the immediate enactment of an equal military-service law, have revealed it in full force.

This could have been the finest hour for Shas leaders: courageously leading the ultra-Orthodox public to a historic agreement on correcting the ever-growing distortion in IDF's service burdens.

Instead, Shas, with its 11 Knesset seats, has revealed itself to be a puppet of United Torah Judaism, which is smaller (7 Knesset seats) and represents a public that is largely alienated from the Israeli and Zionist experience.

It is disappointing to see Shas leader Aryeh Deri — a person with so many secular contacts, who before returning to Shas spoke about starting a civil party that would spearhead a change in government and bring people closer together — aligning himself with the positions of United Torah Judaism, rather than taking an independent line that better fits the Shas electorate.

The interesting fact is that almost all of the current Shas Knesset members enlisted in the IDF and performed full or shortened service. Despite this, they've been pressured into adopting a philosophy that views military service as a burden to evade. A visit to the official Knesset website shows that Eli Yishai served for a full three years, part in the armored corps; Aryeh Deri and Atias only served for a few months, but that's better than nothing. Others who served in the IDF include David Azoulay, a combat medic; Yitzhak Vaknin, a sergeant major; Avraham Michaeli completed his military service with the rank of captain; Ya'akov Margi served three years in the communications corps of the southern command; and Amnon Cohen and Yitzhak Cohen served for significant periods in the IDF. Military service is not foreign to the previous generation of Shas leadership, such as Shlomo Benizri and Yair Levy, either.

And that's where the paradox lies. While Shas political leadership had positive relationships with the IDF, their children no longer perform military service.

Several days ago, Yishai described this quite well, when he was asked in a television interview to prove, against Lapid’s claims, that Shas is not diametrically opposed to service in the IDF. “I am ultra-Orthodox, and I enlisted," he boasted. "Many of my nephews have served and are currently serving in the army.” He failed to mention his sons and sons-in-law for a good reason: he sent them to respected Lithuanian Talmudic colleges, where they became soldiers in the industry that generates exemptions from military service under the aegis of the law governing Torah study as a profession.

The disappointing fact is that Rabbi Ovadia Yosef’s party, which was founded in 1984 to counteract discrimination against Mizrahim (Jews of North African and Middle Eastern descent) at the rabbinical-study institutions run by the Lithuanians, now fawns all over them, while ignoring its own heritage.

Rabbi Haim Amsalem, who was removed from Shas and founded the Whole Nation party, through which he ran for the Knesset, often talked about the tendency of top Mizrahi Shas leaders to send their children to Ashkenazi institutions, because of their lack of respect for the Sephardi rabbinical colleges.

Amsalem also spoke out against the culture of exemptions from military service that has spread among the Sephardim. His main claim was that Mizrahi Jews, who were known for being productive, adopted the culture of seeking handouts and poverty of the Ashkenazi ultra-Orthodox Jews. His courageous battle against Shas leadership and their policies attracted many supporters, particularly among secular Jews and leftists. But he failed to convince Shas supporters that he has their best interests at heart, and he was not able to meet the threshold for election to the Knesset.

Eli Yishai, who succeeded Aryeh Deri in 1991 as the chairman of Shas after Deri entered prison, adopted the behavior of the ultra-Orthodox Ashkenazi parties on important issues.

Yishai was given a politically moderate party, with an electorate primarily made up of Mizrahi Jews living in periphery areas who had served in the military. In 1992, Deri led Shas into late Prime Minister Yitzhak Rabin’s narrow left-wing government and enabled approval of the Oslo Accords.

Under Yishai, Shas became a clearly right-wing party, which at times took a nationalist line — as was evidenced by Yishai’s battle to deport foreign workers as interior minister.

In recent years, Yishai has found himself, time and time again, following United Torah Judaism. Some of the most prominent examples: immediately after United Torah Judaism announced that it was boycotting the Plesner Committee for Equality in Military Service, Yishai also announced that Shas would not sit on the committee. He made this statement even though, behind the scenes, Shas representatives had indicated that they wanted to reach a compromise. Shas Knesset members, some of whom live in periphery areas, complained to each other that in chance meetings with party activists in synagogues, the question that is asked is, “Why is Yishai caving in to the dictates of the Ashkenazim?” Yishai heard these comments, but ignored them.

The most irritating was Yishai’s handling of the affair regarding the girls at the school in the town of Emmanuel two and a half years ago. He opted to remain silent and follow the same line as the Lithuanian ultra-Orthodox Jews, in face of the unseemly discrimination of the Mizrahi schoolgirls who were separated from the Ashkenazi girls.

While Yishai was at the helm, the moderate and proud Mizrahi party was transformed into a satellite party of United Torah Judaism. There were times when Yishai looked like a child trying at all costs to satisfy his parents the ultra-Orthodox Ashkenazi leadership.

During his term, Shas began to alienate itself from its supporters — the very public that Deri had attracted in the past, had gotten to identify with him and which is largely traditional. The hard-core of Shas is thus becoming increasingly ultra-Orthodox and looking towards the Ashkenazim: it wants to be educated in the Lithuanian institutions and does not serve in the IDF.

When Deri returned to Shas several months ago, he discovered the hard way that the party he had known so well had changed, undergoing sociological changes and becoming more Ultra-Orthodox and more right-wing. While he worked to change the direction and dampen Yishai’s fiery style, he quickly discovered that it is hard to change the general direction of the ship.

Universal military service is the big test for Shas in general, and particularly for Aryeh Deri, whose vision was to establish an “Israeli, civil party involved in day-to-day life.” This could be the turning point for Shas, which can return to its roots, connect with its base electorate and even expand it. Shas could turn its back on the ultra-Orthodox Ashkenazim, with their strict party lines, and become a real partner in a historic change with respect to military service for all.

If Shas continues to march down the path plotted by Yishai, it will lose its original identity, totally and completely.

Mazal Mualem has been chief political analyst for both Haaretz and Maariv.