Senior Sephardic ultra-Orthodox figures have announced their support for the Ashkenazi Yahadut HaTorah. 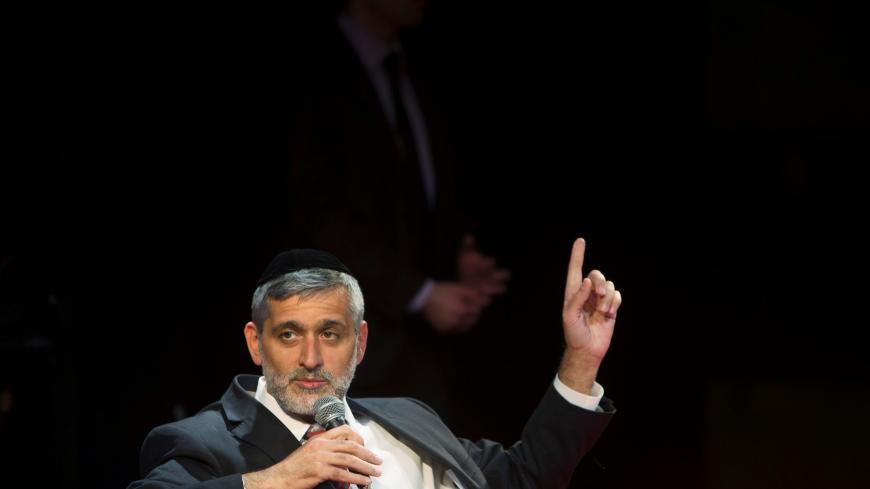 The two main ultra-Orthodox parties running in the April 9 elections are Ashkenazi Yahadut HaTorah and Sephardic Shas. The two parties traditionally target different constituencies and have their own rabbis and educational system. In fact, Shas was founded in 1984 over the discrimination against Sephardic Jews by the Ashkenazi ultra-Orthodox establishment, and in order to offer a political alternative to Yahadut HaTorah.

But what happened on March 31 surprised even the most wizened veterans of ultra-Orthodox politics. Two outsiders, former Shas chairman Eli Yishai and his spiritual mentor Rabbi Meir Mazuz, participated in Yahadut HaTorah’s election rally in Jerusalem’s Conference Center, with all the major Ashkenazi rabbis in attendance. A few days earlier, the two men, the head of a prominent Sephardic yeshiva and the former head of Shas, had publicly voiced their support for Yahadut HaTorah.

During the event, which took place entirely in Yiddish, Mazuz was given the unusual honor of addressing the crowd in Hebrew. He expressed complete support for Yahadut HaTorah. “Don’t think that the Sephardim won’t vote [Yahadut HaTorah] this time,” he said, noting that the first spiritual leader of Shas, late Rabbi Ovadia Yosef, had voted for Yahadut HaTorah as a young man.

In the evening before the event, Mazuz tried to explain to his followers what he was doing: “The Ashkenazim are good people who care about everyone. They care about the Torah and sanctify God’s name." He said, "We had no choice, because Shas was acting as if they were angry with us and vetoing us at every turn.” Shas leader Aryeh Deri had vetoed Yishai's ministerial appointment. “But the veto was overturned. … Thank God, we're set free. This time we’re supporting Yahadut HaTorah,” he concluded.

Ittai Gadasi, a commentator on Radio Kol Chai, thinks that the move could tear a historic rift in the Sephardic community and end its automatic support for Shas. “Over the years, we’ve known that the division between the ultra-Orthodox parties has been rigid. Sephardic Jews voted for Shas while Ashkenazi Jews voted for Yahadut HaTorah. If this move really turns out to have increased the strength of Yahadut HaTorah, it will teach us something about voting patterns within the ultra-Orthodox frameworks, something that hasn’t happened since the founding of Shas,” Gadasi tells Al-Monitor. “If Eli Yishai had joined up with the Likud or [Moshe] Kahlon’s Kulanu Party, it would have been less serious politically. The fact that the former chairman of Shas now supports a party that many consider to have mistreated the Sephardic community and is in many ways responsible for the discrimination they faced is a dramatic turn of events.”

Yitzhak Shimon is the beadle of a Jerusalem synagogue who supports Mazuz and Yishai. He claims that given the current situation, he had no other choice. “Shas played an important role in the history of the Sephardic community, but there were those who made cynical use of this holy party, so there is no reason to continue to support it,” he explained to Al-Monitor. “Today, Shas has veered off the course set by Rabbi Ovadia Yosef, and anyone who votes for it despite all this is nothing more than a foolish enthusiast. Yahadut HaTorah is an excellent choice.”

Shimon isn’t bothered by the idea that the party was responsible for the discrimination faced by the Sephardic community. “Historically, Sephardic Jews were a part of the Ashkenazi institutions,” he says. “Of course there were all sorts of claims about what they did, but thank God, the Sephardi public established glorious institutions. But there is something that will not go down in history, … and it is the suppression and discrimination faced by an important subgroup within the Sephardic community and against Eli Yishai and his mentor, Rabbi Mazuz. Why is no one talking about that? Why do we only scream for help when the Ashkenazim oppress us?”

The story of Yishai’s break with Shas and his public support for Yahadut HaTorah is a long one. Yishai was appointed chairman of Shas in 1999, after Aryeh Deri was sent to prison for three years for corruption. Shortly before the 2013 election, Deri returned to politics. Yosef restored him to the Shas leadership alongside Yishai and he was given the second-place slot on the party’s Knesset list. Later that year Yosef appointed him chairman and the conflict between him and Yishai intensified.

Yishai left Shas before the 2015 election and founded the Yachad Party, which did not pass the vote threshold. Since then, he has been waging a fierce battle with Deri, who stubbornly refused to include him in the Shas list this year and took steps to prevent him from joining the lists of other parties.

Over the years, there have been countless discussions of bringing Yishai back to Shas, but Deri consistently refused to include his political rival. He also took steps to block Yishai’s inclusion in the Union of Right-Wing Parties. Yishai was forced to run again with his Yachad, which once again the polls predict will not pass the vote threshold. He thus withdrew from the race and announced his support for Yahadut HaTorah.

“What makes this story special is that Rabbi Mazuz is one of the figures most closely identified with Sephardic separatism. Nevertheless, he took this dramatic step and expressed support for an Ashkenazi party,” researcher Nissim Leon, who wrote three books about Shas, said in a conversation with Al-Monitor. “The fact is that Rabbi Mazuz saved ultra-Orthodox votes — in this case, Sephardic votes — from being wasted due to the anticipated failure of Eli Yishai’s party. It was a bold move, as far as he was concerned. He put aside sectoral differences and took steps to strengthen the ultra-Orthodox parties overall. While it is certainly true that some people wanted to wreak political vengeance on Deri, I believe that from a more comprehensive perspective, this was an attempt to boost ultra-Orthodox strength and that Rabbi Mazuz considered it the responsible thing to do.”

Leon went on, "Mazuz is one of the clearest voices in all matters pertaining to the creation of Sephardic educational institutions, which are not only run by Sephardim for Sephardim, but also don’t try to imitate the Lithuanian [Ashkenazi] approach to Torah study, preferring to stick to the Sephardic tradition instead. Mazuz believes that the failure to accept Sephardic students in Ashkenazi educational institutions is not the main problem. The main problem is that Sephardic Jews seek to be accepted in these [Ashkenazi] institutions.”

While ultra-Orthodox politics has always been characterized by power struggles within the different factions, somehow these groups have always managed to link arms and work together before each election. If there is one thing that everyone agrees on, it is that the ultra-Orthodox parties are on unstable footing. The bonds between the various communities that make up these parties are under constant threat. It was a miracle that the rift in the Oct. 18 local council elections didn’t spill over into the Knesset election, and the Shas unrest does not bode well for those seeking unity among the Sephardic ultra-Orthodox factions.