Almost one year into the term of Aryeh Deri, it looks as if there is no way to stop the party’s gradual disintegration. 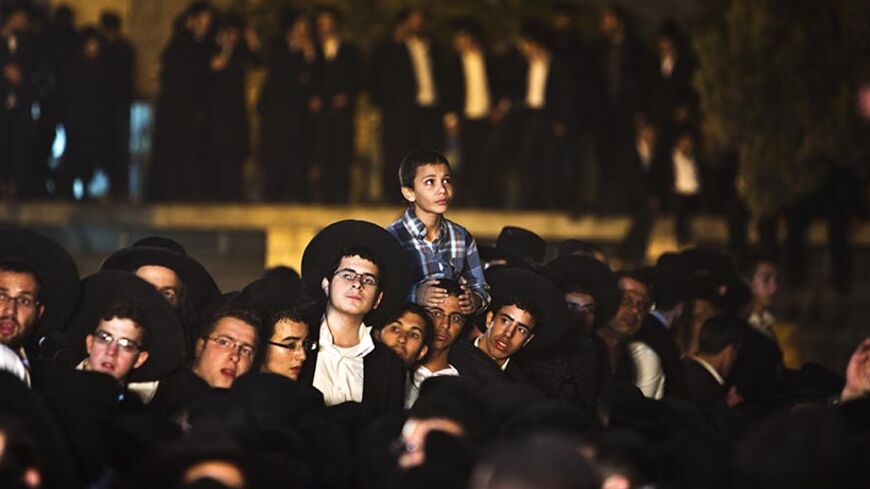 Ultra-Orthodox Jewish men lift a boy during the funeral of Rabbi Ovadia Yosef, the spiritual leader of the ultra-religious Shas Party, in Jerusalem, Oct. 7, 2013. - REUTERS/Nir Elias

Shas Party Chairman Aryeh Deri sent personal text messages to all of his faction’s Knesset members at the end of August, forbidding them to be interviewed or to make any statements on major issues on the party's behalf. Obviously, Deri did not skip his predecessor, current Knesset member and former Minister Eli Yishai. He made it clear to Yishai that any statements not coordinated with him first cause serious damage to the party as a whole.

These text messages came in the wake of Yishai’s comments to the media that he opposed the Shas Party joining the Netanyahu government. Yishai and Deri have been bitter rivals for the past few years. These comments were made while Deri was going out of his way to commend Prime Minister Benjamin Netanyahu for his handling of Operation Protective Edge. His praises gave the impression that he was looking to join the government.

Having been humiliated by Deri on numerous occasions since the death of Shas spiritual leader Rabbi Ovadia Yosef on Oct. 7, 2013, Yishai must have read the message and chuckled to himself. He gave his answer to Deri on Aug. 31, in a comprehensive interview with Israeli Channel 7 radio. Yishai spoke freely about a series of issues on the public agenda, and reiterated his opposition to join the government. By doing so, he made it clear to the current head of the Shas Party, in the most public manner possible, that he does not consider himself subject to Deri’s authority. Even more importantly, he did it in the most public way imaginable.

The feud within the Shas Party leadership, between Deri and Yishai, which surfaced again over the past few days, is just a symptom of the party’s state less than a year after Yosef's death. Recent polls show Shas getting weaker; so if elections were held today, it would win an estimated seven seats, as opposed to the 11 seats it has today. At the same time, Yahadut HaTorah, the Ashkenazi ultra-Orthodox party, would actually grow bigger than Shas. While it would only have a one-seat advantage, this could signify a dramatic reversal of the trend until now.

Shas was an important party in Israeli politics and Israeli society in general for over two decades. Ever since it was founded by Yosef in the 1980s as a Sephardic social movement that challenged the Ashkenazi ultra-Orthodox establishment, it was almost always part of the government, except for a few very brief periods in the opposition. In its heyday, Shas controlled 19 seats, but even when it had just 11 seats in the Knesset, it was considered a stable force to be reckoned with in Israeli politics. For years, prime ministers and other senior government leaders made pilgrimage to the spiritual leader’s home in Jerusalem. Yosef’s rulings were not limited to matters of religious law, either. They covered a wide range of issues ranging from diplomacy to security. For example, he instructed Shas to support the Oslo Accord, giving late Prime Minister Yitzhak Rabin a majority in the government. Later, he ruled that it was permissible to release Palestinian prisoners in the deal with Hamas, which led to the release of the abducted soldier Gilad Shalit.

Much had been said over the years about what would happen to Shas in the days after Yosef's death. But it seems that no one imagined that it would be caught up in such a dizzying downward spiral less than a year after he died. The way things look now, it is highly doubtful that the party will be able to extricate itself from this decline.

Evidence that the Shas Party has lost its appeal among the public could be seen on Aug. 28, when a rally that Deri organized to mark the 11-month anniversary of Yosef’s death was deemed a resounding failure. Only about 2,000 people attended the event at the Jerusalem Convention Center, a striking contrast to the rabbi’s funeral, when hundreds of thousands crammed the streets of that same city. Yishai did not attend the event, nor did two of Yosef’s four sons, providing evidence of the tense relationship between the Yosef family and Deri. Sources in the party are now claiming that it is not at all certain whether the current chairman will actually hold any of the future mass events that he had planned to wake up Shas grassroots support. Instead, he must deal with harsh criticism that he wasted 400,000 shekels (about $112,000) from the party’s strained coffers for this failed event.

Ever since Deri received the keys to the party from Yosef himself for a second time, just months before the rabbi died, he has been unable to restore the party to its glory days. He acted rudely toward Yishai, who headed the party throughout the years that he was absent, exacerbating the feud between the two men to the point that it could destroy the party. He then forced Yishai’s supporters out of all administrative positions in the party, and in so doing turned a personal feud into a war between two rival camps. The result of all that is endless bickering in the party, which has been a member of the opposition since the last elections because of Finance Minister Yair Lapid’s refusal to sit in the same government with it. Consequently, the Shas Party lost much of its power and budgets.

So far, Shas has failed to establish itself as an opposition party with a social orientation, just as Deri boasted he would turn it into. Though he denies having any intention of joining the Netanyahu government, Deri is consistently seen doing everything in his power to do just that.

In this somber atmosphere, it should come as no surprise that former Minister Ariel Atias, himself a protege of Rabbi Yosef, announced last June that he would be resigning from the Knesset.

According to sources within Shas, the chance of Yishai remaining in the party under Deri’s leadership is slim at best. He knows that Deri will do whatever it takes to eliminate him once and for all before the next elections. That is why, as time goes by and the first-year anniversary of Yosef’s death rapidly approaches, estimates in Shas indicate that Yishai will take steps to split the party. To do that he would need the support of one-third of the party’s Knesset faction, or three more Knesset members. “Given the bitter mood that Aryeh Deri is creating in Shas, it is entirely possible,” said one senior party member, who thinks Shas is at a critical juncture. An in-depth analysis of the polls indicates that Shas is starting to lose the support of its hard-core constituents. Some of them will switch allegiance to the Likud Party, while others will join a future party to be founded by former Minister of Communications Moshe Kahlon. Still others, namely ultra-Orthodox voters who are fed up with Shas, are already switching to Yahadut HaTorah.

Furthermore, it looks as if within all the changes that the Israeli political system has been undergoing since the last elections, yet another traditional political power center suffers a blow and loses its influence.