Deri Ready to Give Facelift To Israeli Shas Party

The old-new chairman of Sephardic Shas Party, Aryeh Deri, plans to rejuvenate its identity as a traditional social party, distancing it from the sectarian tendencies of the ultra-Orthodox. 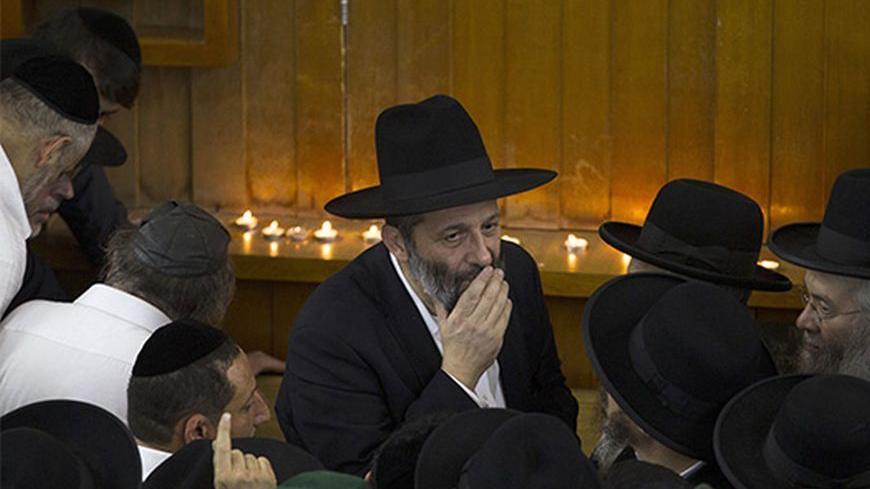 Aryeh Deri (C), leader of the ultra-religious Shas political party, looks on near the body of Rabbi Ovadia Yosef, the spiritual leader of Shas, before his funeral, Jerusalem, Oct. 7, 2013. - REUTERS/Ronen Zvulun

About two years before Knesset member Aryeh Deri returned to the ultra-Orthodox Shas Party, he already began speaking openly about starting a new party under his leadership. With his eyes aglitter, he told journalists, politicians and public figures who met with him in his tiny office in Jerusalem about his dream of using the knowledge and experience he accumulated to return to politics and become a unifying figure for the Israeli public.

By that time, Deri made his first moves to take over the leadership of Shas once again. Onlookers would have thought that he didn’t have a chance. Knesset member Eli Yishai’s position as party head and confidant to Shas spiritual leader Rabbi Ovadia Yosef was solid.

In 1999, Deri was found guilty of several crimes, including bribe-taking, and spent two years in prison, until July 2002. He has since told many people that he planned to return to politics — either with Shas or without it. He let them understand that he was intrigued by the idea of starting a new party, because Shas had become too separatist, too extreme and too associated with the ultra-Orthodox world, while abandoning its identity as a traditionalist social party. He was unhappy about those trends and believed that they harmed the party.

Deri spoke openly then about how he imagined a younger party with fewer professional politicians and a Knesset list that would be less ultra-Orthodox and more traditional. If he could, he would even include a woman, he said, though he qualified his statement by explaining that he would have a hard time getting that past the party’s ultra-Orthodox supporters. Deri spoke about a social and civil vision and his passionate desire to break away from the sectorial tendencies of the ultra-Orthodox. The secular people he spoke with were very impressed by his plans.

Deri first came out publicly with his decision to return to politics at the Israeli Presidential Conference in June 2011 and revealed that he had founded a new movement named “Tikkun,” or Repair. He was critical of the party from which he emerged, and said, “It doesn’t need to have the same face it has today.” He voiced diplomatic moderation when, at the same event, he said, “There is no chance of us making peace without us having peace among our own people. I am getting back into politics so that I can bring the people together. Even if we are heading toward difficult steps, we will go there together.”

Back then, Deri had two target audiences: His first was the general public, which had grown disillusioned with him after he was convicted of criminal activity. Deri tried to win back the love of the public by exhibiting a conciliatory and moderate worldview. His second target was actually a community of one — Rabbi Ovadia Yosef. Deri attempted to relay a message to the rabbi and his inner circle that if he is not brought back into Shas, he will pose an electoral threat to them. The pressure worked. Just before the last election, Yosef brought Deri back to the party through the front door and later handed the leadership over to him for the second time.

We will never know if Deri really planned to found his own party, or if it was just an empty threat. On the other hand, the questions that are still relevant since then are whether Deri really does have a different and innovative vision for Shas and whether, now that he is party head, he will change its image according to this vision. According to senior members of Shas who have kept close tabs on his return, the answer to both questions is yes.

People who have seen Deri since the seven-day mourning period ended over the passing away of Yosef, say that he looks freer than ever and more motivated to transform the mass display of mourning for the late rabbi into electoral strength. The fact that Yosef managed, before his death, to appoint him head of Shas is now the source of Deri’s strength in a party faced with rivalries and factionalism since the loss of its leader. Deri is the living political legacy that Yosef left behind. He will be the one to determine what the party will look like in the years to come.

It is believed in Shas that the first step Deri will take is to try to expand and diversify the “Council of Torah Guardians,” the party’s ultimate rabbinical authority. He will continue to show absolutely no tolerance for his political rival in the party, Eli Yishai. He has completely removed him from any leadership positions, and refused to listen to advice, according to which he should show Yishai the magnanimity of a true victor. As far as Deri is concerned, Yishai is of no political significance.

People in the party who are close to Deri are under the impression that the chairman of Shas knows exactly where he wants to take the party. He wants to rebrand it as a moderate social party, and by expanding its support among new publics, to increase its strength in the next elections. These people also say that Deri perceives himself as a civil and social leader who can speak to a very broad base of people in Israel, including those who are not at all observant.

According to them, Deri will act on two fronts: He will prepare Shas for the next elections, while trying to join Prime Minister Benjamin Netanyahu’s government. If he fails to join the government in the near future, Shas could yet rescue Netanyahu in the event that his right-wing coalition falls apart as a result of a diplomatic agreement.

As just about the sole leader of the party, Deri intends to implement his plan to refresh the Shas list of candidates by making it younger and including more moderate personalities. If it was up to him — and that’s how things look now — he will try to reinvent the party. After many years of political exile and being distanced from Shas, he once more holds the keys to the party that shaped and changed the face of Israeli society in the 1980s. Now he will try to become yet again the most influential man in politics.