Shas Party is losing its electoral base

The battle between current Shas leader Aryeh Deri and former Chairman Eli Yishai will surely affect voters, who might prefer other parties over Shas. 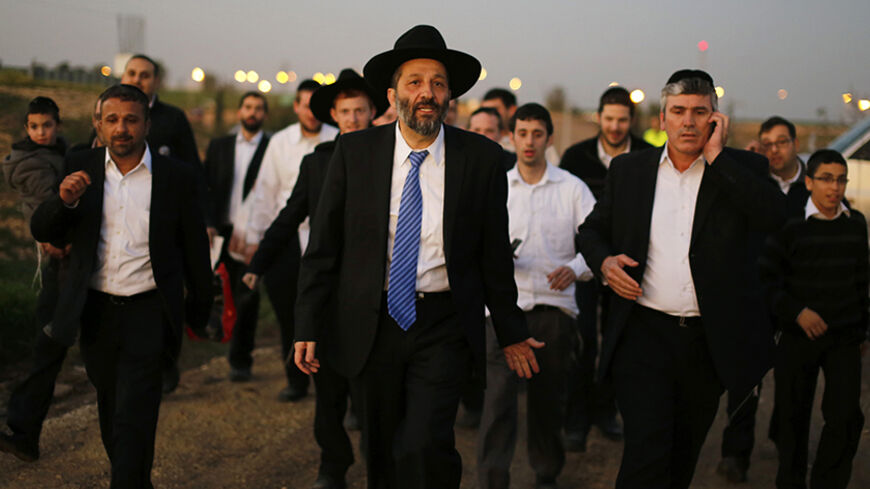 Aryeh Deri (C), leader of the ultra-Orthodox Shas Party, attends an annual pilgrimage to the gravesite of Rabbi Yisrael Abuhatzeira in the southern town of Netivot, Jan. 14, 2013. - REUTERS/Amir Cohen

“It’s all spin … I can assure you with absolute certainty that there will not be any splits in Shas … Shas is united,” visibly annoyed Knesset member Aryeh Deri said when asked in an interview with Israeli TV Channel 1 on Sept. 30 about the bitter conflict between him and Knesset member Eli Yishai in the party’s highest echelons.

Shas Party Chairman Deri arrived at the studio as the main guest in a discussion to mark the first anniversary of the death of Rabbi Ovadia Yosef, the Shas Party founder and spiritual leader. He insisted on painting a rosy picture of the party. According to him, Shas survived its leader's death with considerable success and is now fulfilling the legacy he bequeathed it by serving as a social party.

This upbeat depiction misses the mark, and ignores the harsh reality within Shas. In the year since Rabbi Yosef’s death in October 2013, Shas has found itself in a dizzying downward spiral. It's a party torn asunder by squabbling and on the verge of a breakup. It's a party trapped in the political desert that is the opposition, cut off from all the ministries that it controlled for years. The polls indicate that Shas is leaking supporters to the political party that former Communications Minister Moshe Kahlon is expected to form, and even worse, to the rival Ashkenazi ultra-Orthodox party Yahadut HaTorah.

The late rabbi’s closest relatives received Deri’s deceptive depiction of what is really happening in Shas with derision and anger. They feel betrayed by Deri, who was restored to the Shas leadership by Yosef himself, but who has made a point ever since the rabbi's death of keeping anyone identified with the rabbi’s family away from the party’s center of power.

“The rabbi’s family sees Deri as someone who is personally [causing] a rift within Shas,” said a senior party member. “With Deri, anyone who has the slightest hint of ties to the rabbi’s family or to [former Shas Chairman] Eli Yishai has been eliminated. He has built himself into a one-man leader, and that is what Shas is today: the Aryeh Deri party. He is obsessive in the way he chases after honor and respect. He talks about Rabbi Yosef’s legacy and how much he misses him, but he tramples that legacy crudely everyday by humiliating the very people who the rabbi admired and loved. That’s the true state of affairs. It’s hardly the idyllic image that he tosses to the media. Anyone living within Shas knows what the situation really is. And that is not to mention Eli Yishai, who is very close to splitting the party.”

Deri returned to lead Shas after a 14-year exile, which began after he was convicted of a felony in March 1999 and sentenced to prison. As a young man, he was considered a rising star in politics and was popular with late Prime Minister Yitzhak Rabin. Even today he is popular with the secular media and can speak to it in its own language. In the elections for the 15th Knesset in May 1999, he led Shas to the apex of its power with 17 seats. Later, while feeling his way back to politics, he gave scattered promises — to Yosef and his family in particular — that if he was restored to the leadership of Shas, the party would grow accordingly.

The last year proved that Yosef's death left an enormous void. Yosef was the force that built Shas into a political powerhouse. While Yosef left behind a vast Jewish legislation legacy, political directives, functioning institutions, devoted followers and a spirit that will not quickly disappear, infighting threatens to destroy the Shas movement, politically at least.

On Sept. 28, the Central Conference Hall in Jerusalem hosted the main memorial service to mark the first anniversary of Yosef’s death. Inevitably, the event was orchestrated by Deri. Yet, unlike the sparsely attended rallies he organized over the past few weeks, this time, with considerable effort, he was able to bring together a crowd of thousands and present them with a movement that is still alive and kicking. He even thanked Yishai during the event for the years he spent leading Shas. The comment drew a loud round of applause.

But Yishai, like many other active members of the party, was not impressed by the compliment. After all, he has been left off the list of speakers even though he had been the rabbi’s right-hand man for 14 years and one of the people closest and most favored by him.

More generally, ever since Yishai was deposed as the party’s leader, Deri has made a point of distancing him from any power and influence. He would not let Yishai speak at Rabbi Yosef’s funeral or at the event to mark the end of the weeklong shiva mourning period. And Deri does the same to anyone who is linked to Yishai.

While Deri is making an effort to convey a sense of unity in the party, Yishai is only getting angrier and more eager to finally get his revenge. In fact, the two men don’t talk at all. They are completely cut off from one another. It looks like Deri doesn’t understand how potentially damaging it could be to push away Yishai and his supporters. They have already begun to think in practical terms of what it would take to go out on their own, which would effectively mean breaking Shas apart. As time passes, that seems increasingly inevitable.

So far, Yishai’s strategy has been to maintain complete silence. He's hurt; the insults he has suffered are pent up inside him, but he does not intend to raise a white flag and resign. No, he intends to fight for his rightful place within the party. A senior member of Shas told Al-Monitor: “Eli Yishai and everyone identified with him know that they won’t be on the Knesset list in the next elections. They realize that they have to make a plan B. What’s strange is that Deri doesn’t realize how powerful the barrel of explosives beneath him really is. Once he does realize that, it will be too late.”

Meanwhile, Shas continues to sail across a particularly stormy sea. It's fast losing its central position in Israeli politics. For over two decades, Shas was considered a stable force to be reckoned with, but now its future is hazy. After Yosef’s death, Shas is a very different party from what it once was — and led by a man without the foresight to keep it united.

But it’s not just Shas that is undergoing this kind of shakeup and transformation. In Israeli politics, new players have entered the arena — Finance Minister Yair Lapid, for example, who kept Shas out of the Benjamin Netanyahu government after the last election — and more are expected to follow. In the next elections, it could be Moshe Kahlon, who offers a new home to longtime Shas supporters and Mizrahi Jews living in the periphery.

Deri’s ties to the party’s social platform are tenuous at best. He may find himself competing for that space against many other political forces. The real problem he faces, however, is that they represent those social objectives far better than he does.