Ahead of Israeli elections, the ultra-Orthodox Shas Party leader Aryeh Deri is determined to drive away former Shas Chairman Eli Yishai, despite the political price to be paid by an already declining party. 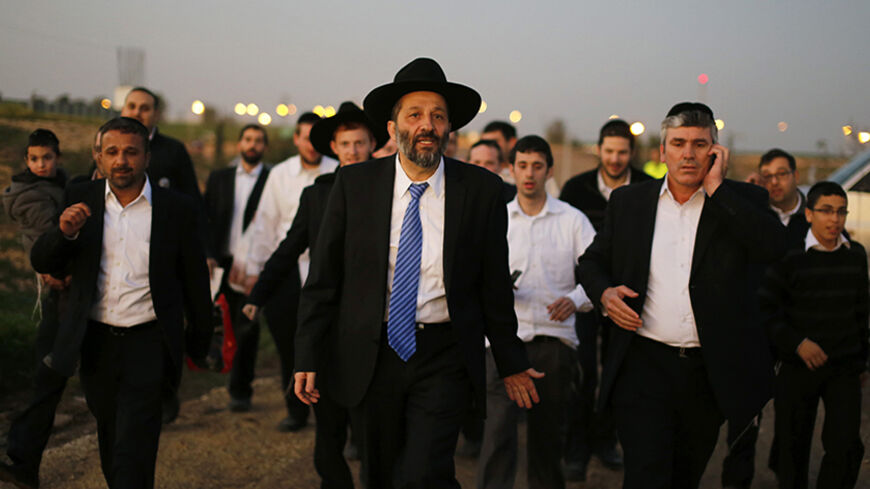 Aryeh Deri (C), leader of the ultra-Orthodox Shas Party, attends an annual pilgrimage to the gravesite of Rabbi Yisrael Abuhatzeira, a Moroccan-born sage and kabbalist also known as the Baba Sali, in the southern town of Netivot, Jan. 14, 2013. - REUTERS

On Dec. 14, when the head of the Shas Party, Aryeh Deri, commented on Knesset member Eli Yishai’s anticipated departure from the party, he actually sounded convincing, as if he were full of empathy and respect for Yishai. “I offered my friend Eli Yishai the No. 2 spot on the Knesset list, the position of minister, to ensure that he receives the respect that is his due,” said Deri, while expressing his disappointment over his fellow party member’s stance.

Deri attempted to portray the situation within Shas as calm and tranquil, while in fact, this clash of titans between him and Yishai already had started damaging Shas and was likely also to affect the coming elections. On the evening of Dec. 15, Yishai made his threats a reality and announced the establishment of an independent party, which means that Shas would be the first to suffer. Before this split, polls predicted it would only win about eight seats in the upcoming elections. It seems that from this point onward the situation of the party, which garnered 17 seats in 1999, will only continue to deteriorate.

That is why the decor that Deri organized for himself in the party’s Jerusalem headquarters was actually intended to hide the internal fights within Shas, and to add a certain modicum of authority and innovation to the party under his leadership. Sitting beside him was Adina Bar Shalom, the eldest daughter of the movement’s founder and spiritual leader Rabbi Ovadia Yosef, an enormous portrait of whom was set up behind them. Deri announced that Bar Shalom, a recipient of the Israel Prize, whose work in empowering ultra-Orthodox women is considered groundbreaking, will co-chair a new Women’s Council together with Deri's wife, Yaffa. That council will operate alongside the party’s leadership.

Given reports that Bar Shalom had been courted also by former Likud Minister Moshe Kahlon, head of the new Kulanu party, which polls indicate will be taking a chunk of Shas voters, her presence at the news conference was quite an achievement for Deri. It is yet unclear how Deri was able to convince Bar Shalom to join him, as it is a well-known fact throughout the political system that she never really appreciated Deri and thought that the relationship between him and her father was not as close and intimate as Deri portrays it. She even said as much in her terse, incisive style in a television interview just two months ago in which she responded to comments he made against her. “He hadn’t been in my father’s home for 13 years. What does he know about my father? Apparently, he doesn’t know him at all,” she lashed out at Deri.

But politics works in mysterious ways, and on Dec. 14 she sat beside him, after apparently giving up a chance to be the first woman to represent an ultra-Orthodox party in the Knesset. Now she is serving as a political tool, wielded by Shas head Deri in his struggle against Kahlon’s new party and especially against his bitter rival Yishai. After 30 years in Shas, most of which as the political figure closest to Yosef — Yishai was forced to leave the party.

But even this well-covered media event of Deri and Bar Shalom could not hide what was really happening within Shas, a movement that has been deteriorating from the inside ever since the death of its leader in October 2013. The passing of the party’s founding father, who was a figure of near-mythical proportions in his lifetime, obviously contributed to the party's decline, but the process is also intimately connected to the way that Deri chose to run Shas from the very moment he received back the reins of rule.

Yosef chose to restore Deri to a leadership position, long after he retired from political life in 1999 after being convicted on bribery charges. Nevertheless, the rabbi continued to treat Yishai with respect, even after removing him as the party’s leader. From the moment the rabbi died, however, Deri launched a campaign to eliminate Yishai from political life entirely. He would not allow him to speak at the rabbi’s funeral, removed him from all of the movement’s decision-making forums in one fell swoop and did everything he could to humiliate him.

Deri didn’t want Yishai alongside him. At best, he wanted him to be a submissive member of the Knesset for the faction. With this in mind, Deri took a series of steps that infuriated all the other Knesset members from Shas. It seems as if Deri had a hard time accepting that Yishai, who was his aide long ago, had become an esteemed figure in Israeli politics. During Deri's prison term, Yishai led Shas in complete coordination with Yosef and accumulated significant experience as a senior minister and member of the most influential security forums. He was a member of the senior Cabinet forum — the “Octet,” when Israel prepared to attack Iran. Based on what is known about their meetings, he served as a moderating voice there. To this very day, Yishai maintains excellent relations with Prime Minister Benjamin Netanyahu. All of this is why Yishai rightly regards himself as a key, experienced figure in the Shas movement who suddenly found an ax hovering over his neck. His supporters were removed from power, and he was isolated and humiliated.

Deep inside, Yishai knew the truth. Yosef’s family had been maneuvering to hand the party back to Deri, even though the elderly rabbi had a profound fondness for Yishai and knew that he should be wary of Deri, who was too independent and too untrustworthy. Yishai had tears in his eyes as he told his confidants that in his final days, Yosef asked for his forgiveness for hurting him. But by then it was already too late. After Yosef’s death, even the rabbi’s own family members, who helped restore Deri to the party’s leadership, were viewed as pariahs by the party’s old-new leader, who removed them from any positions of public and financial power. Despite anything that Deri might say, the current mood in Shas is hardly one of tranquil camaraderie.

When it comes to the media, Deri has a distinct advantage over Yishai. He is charismatic and a good orator, and the secular media has been flirting with him for three decades already. That is why the narrative composed by Deri, claiming that Yishai rejected his advances, has been adopted by most of the news reports. But Deri did not mention that his generous offer to Yishai was accompanied by the demand for a commitment that he would not be interviewed without first obtaining Deri’s permission. According to some reports, Deri even insisted on receiving a letter of resignation from Yishai, which he could use whenever it suited him. In private conversations over the past few months, Deri declared in no uncertain terms that he didn’t want Yishai in the party, and that he hoped he would quit. Yishai eventually got the hint and decided to embark on a new route of establishing his own party.

Shas is now a party in decline. Deri faces a dramatic test of strength in the next election. As the party’s all-powerful leader, he will be credited with the success of the party — and blamed for its failure.